The cornerstone of heavy metal

On September 17, 1970, Black Sabbath released their second album Paranoid. Recorded and issued a mere seven months after their self-titled debut, it was a pivotal moment both for the band that recorded it and the future of heavy music. In the wake of solidly negative contemporary reviews, Paranoid soared to the top of the British chart, a bleak, dark album reverberating with lumbering riffs that ushered in a new paradigm for heavy rock.

Their most recognisable song, the title track is also one of the band’s most atypical: short, simple and brisk, yet still imbued with hopeless despair. A #1 hit in Britain, it brought Black Sabbath a legion of new fans. Many who bought the album on the strength of Paranoid were likely astonished by the ominously booming opening epic, the eight-minute anti-war jam War Pigs, originally titled Walpurgis, that had grown out of live readings of an earlier track, Warning. Planet Caravan offered a further curveball, a trippy acoustic ride through the solar system with Ozzy’s vocals distorted by an oscillator. Next was Butler’s Twilight Zone-style saga of alienation, its murderous antihero Iron Man brought to life with a gargantuan stumbling riff, returning from the future to destroy the world he had sought to save. As the Vietnam War escalated and the Summer of Love died in flames, Black Sabbath’s dark nihilism was the complete antithesis of Flower Power.

Side Two shone no brighter. Electric Funeral’s plodding vision of nuclear war soared to a screeching crescendo, Hand of Doom’s hypnotically terrifying soundscape pulled back the curtain on American war veterans medicating their PTSD with heroin addiction. Rat Salad allowed Ward to shine with a drum solo that flowed with an almost lyrical sense of composition, and while the meandering intro to Fairies Wear Boots offered similar malevolence to the rest of the album, Osbourne’s oddball lyrics – that were either about a fight with skinheads or an LSD trip – diminished Paranoid’s otherwise bitter sense of purpose. It was a brief moment of levity on an album that mirrored the crushing angst and uncertainty of a generation in despair as the hopes of the previous decade were destroyed by the realities of the new one.

With its darker tone and vision and increased songwriting clout, Paranoid had set the groundwork for the emergence of heavy metal even more than its predecessor. As the impact of Paranoid continues to echo through subsequent decades, the enormous 5 LP/4 CD box set Super Deluxe edition is a fitting 50th anniversary tribute to this cornerstone of modern music. Two different mixes of the original album – 2012’s remastered version and a “folded down” quadraphonic mix from 1974 – offer two starkly different sonic experiences, although only a true audiophile will properly benefit from the strange-sounding 74 version. The other discs are given over to the Black Sabbath live experience showing a monstrous band about to reach the peak of their career. While the set lists are similar, their approach to their songs differs on each, with Ozzy giving completely different lyrical readings of War Pigs and Iron Man on the Montreux concert, with its inter-song noodling and clearer sound. On the Brussels disc, a set recorded for TV, their performance is fearsome, an earth-shaking sound with Ozzy reaching manic levels as the show progresses. The added extras only enhance the album’s history and legacy – a reproduction of their 1971 tour booklet, a full colour poster and a massive 60 page hardcover book that tells the Paranoid story far better than a writer who was only 16 months old when it came out.

If there is only one collectible box set on your list this year, make it this one. 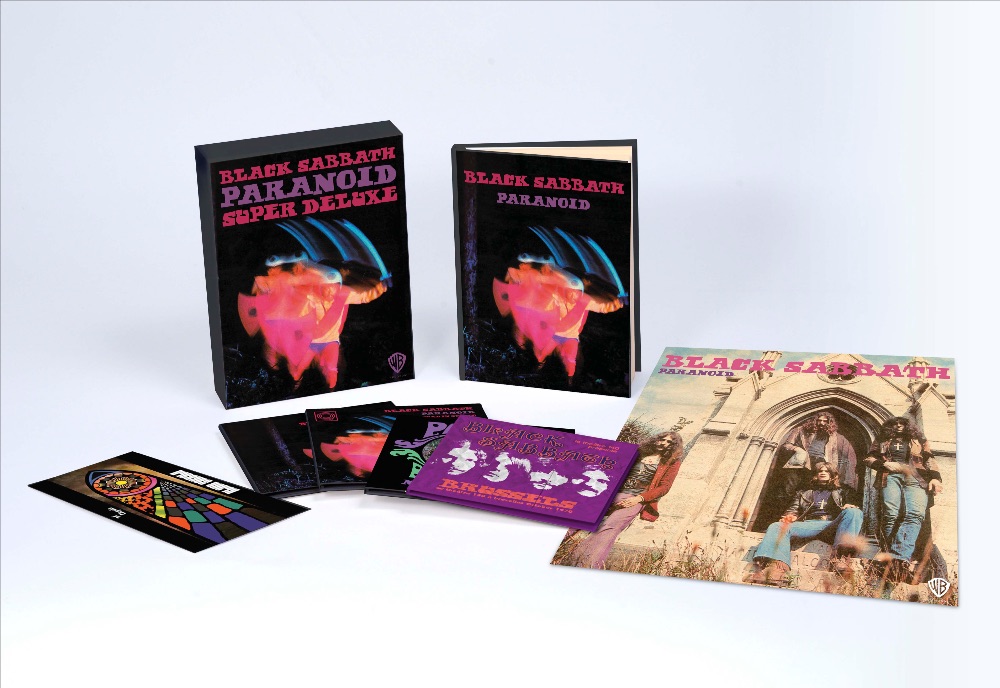