10 Acts to Check Out at Blacken

Home > Features > 10 Acts to Check Out at Blacken

To be fair, everyone playing at this year’s Blacken Open Air will be well worth catching. Carefully-curated events like this aren’t beholden to the rules of major festivals that always seem to uphold the demands of agents and labels, so you know that every act has been picked because the promoter thinks they deserve it. We’re not here to put any act over any other, and on what is basically a closed set for two days, no one has an excuse to miss anyone. But if you’re still having trouble deciding which bands you really need to see between whatever else it is you do at an open air music festival in the middle of Australia, here’s ten we reckon you should check out.

The Neptune Power Federation
The Neptune Power Federation is made up of members of Sydney’s punk and metal royalty and their sound encompasses 70s rock, psychedelia, early 80s British heavy metal and stoner grooves. With vocalist “Screaming” Loz Such playing her role as the time- and dimension-travelling Imperial Princess to the hilt, rely on this band to provide a theatrical heavy rock and metal show like no other.

Black Rheno
If you haven’t caught these maniacs live yet, Blacken will be the time. The northern Sydney trio’s infectious and crushing style of hardcore-laced sludge combined with the wildly unpredictable antics of vocalist Milla makes them an unmissable attraction. Expect him to turn up anywhere from the lighting gantry to the middle of the camping area during the set while he and his mates never miss a beat.

Diploid
Chaotic noise/grind trio Diploid re-define not only extremity but shatter the boundaries of what can be defined as music itself. Bursts of abrasive angular grind and noise explode by in seconds as the band summon sonic pandemonium that has be experienced to be believed.

LagerStein
Brisbane’s kings of the high seas won’t be out of place in the Dead Centre, because Australia’s most swashbuckling, rum-swilling, keytar and violin-wielding scurvy dogs always bring the party – and the beer bongs – with them in their magic flying pirate ship. With rollicking tunes of derring-do and drunken adventures on the Seven Seas, LagerStein’s fun and booze-fuelled set is sure to be a high point of the weekend.

Suldusk
The open sky and vast panorama of the Australian wilderness will be the perfect setting for the magic of Suldusk, whose mesmerising mixture of neo-Pagan folk, ambient black metal and shoegaze will provide a dramatic change of pace from the rest of the festival. Dense, atmospheric and shimmering, Suldusk adds a different dimension to Blacken Open Air.

Abramelin
If unadulterated death metal brutality is your bowl of poison, Abramelin will deliver with a side of gore so high you’ll need a chainsaw to cut your way through it. As unchallenged veterans of Australian metal extremity, Abramelin’s blood-soaked tales of horrifying violence, piercing soloing and crushing riffs will satiate the bloodlust of any pure death metal fan.

Shepherds Reign
Further proving that heavy metal is a universal language, Polynesian warriors Shepherds Reign combine South Pacific tribal rhythms and Samoan traditions with influences from every important metal band of the last three decades.  Shepherds Reign’s powerful energy and supercharged live show will certainly make them one band not to be missed.

Amyl & the Sniffers
This one’s a no-brainer. Embodying the spirit of in-your-face rock n roll with their Rose Tattoo in a knife fight with X sound and a pint-sized firecracker attitude machine out front, Amyl & the Sniffers never fail to deliver a scorching live set and theirs will come hot after a streak of touring throughout the US and Europe, ensuring that Melbourne’s hottest rock band will be absolutely on fire when they descend on the Blacken stage.

Revocation
It might seem unnecessary to put the headlining act into a “must see” list, but it wouldn’t matter where or when Revocation was playing at this festival. These guys are absolutely unmissable, trading in ferocious, clobbering riffs and deceptively technical songs with epic solos, dual vocals and a punishing and entertaining display of death/thrash metal dexterity. They’ve been here so often over recent years they’re almost locals, and they are sure to cap off the festival with style. 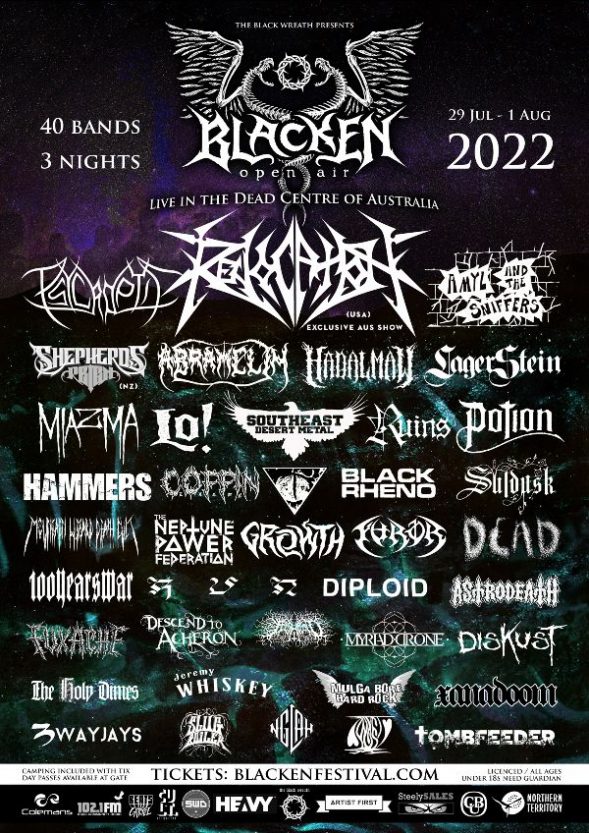