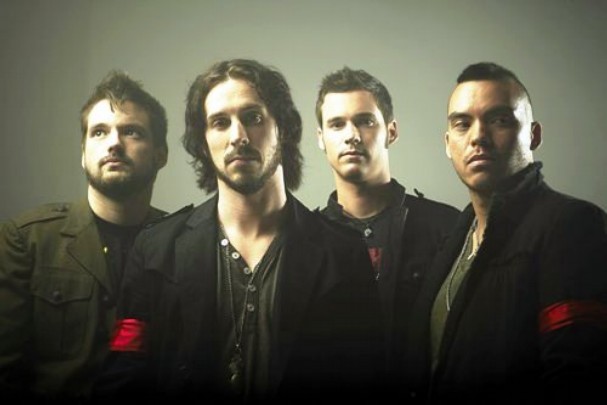 As they prepare to unleash a new acoustic EP, American hard rockers 10 Years are also getting ready to return to Australia as part of Soundwave 2014. Loud had a brief conversation with vocalist Jesse Hasek during some tour downtime, fresh from “signing 1500 autographs” to get the latest on their new release, the festival and his affinity for Australian rock.

Q: What can you tell us about the new live acoustic EP the band is releasing?
A: Well, the cool thing about it is we sort of took a few songs from every one of our previous records, and it’s a live performance in our hometown, Tennessee Theatre. But the thing that makes it different is it’s acoustic, and it has a strings set of instruments behind us, like cello, violin and stand-up bass. So it really shines a new light on old songs, and sort of changes the vibe of them. It turned out really, really cool.

Q: So when is that being released?
A: October 29th. The songs have been very much reinterpreted to cater to the acoustic and to the strings instrument section. We’d never really had a chance to do it until this point, but the performance was actually almost a year ago. We just recorded a live performance in December of 2012 at the Tennessee Theatre, we’d gone back, and we had toured so much we’d kind of put it off to the side for a bit. Then we came back and listened to it. The audio quality sounded so good that we were like, ‘we’ve gotta release this to the public’. Because it was a great surprise to find that it transposed and turned out as well as we thought it would.

Q: Will you be performing any of those songs in the acoustic format when you visit Australia next year?
A: We might throw a couple in there, but we haven’t been to Australia since, if my memory strikes me correctly, like 2006 or 2007. So we’re looking to get back and just put on a good rock ‘n’ roll show, which we haven’t done there in a long time. First and foremost, it’s beautiful down there, but the hospitality and just, respect that is given right out of the gate when you get there was really overwhelming, awesome and for us, a breath of fresh air. I think that lots of times over here we’ve toured the States to death, and sometimes people just get over-exposed, and sort of unappreciative of things. So to come all the way across the world over there and have people be really excited was really awesome.

Q: That previous tour was with Korn from memory.
A: Yeah, it was. We’ve toured with the Korn guys a few times since then, but we’ve been everywhere. We just sort of keep doing what we do, and we’ve been fortunate enough to go to other places. We just never made it back to Australia, and I feel like we need to definitely cross that bridge and get back over there, because it was such an amazing experience. We’re definitely trying to do some Sidewaves, or just get over there and do some clubs, because the last time we were over there we were able to do, I think maybe a couple of headlining club shows and they were awesome. We’d never played a headlining club show over there ever and people still showed up, so it was really cool.

Q: How was your live show evolved since your last visit?
A: Well, I would hope to say that through all the years of touring that we’ve really honed in on a very professional live performance. We’re one of those types of bands that really likes to put on a visual show as much as a sonic show. So we move around a lot, try to engage the crowd and get down in the face, of almost like a Deftones or Iggy Pop type of vibe. But also sound as true to the recordings as possible as well. The many years that we’ve been touring, we feel like we’ve really tightened that up, and gotten pretty good at it. It’s high-energy.

Q: Good to hear. Has the band begun writing new material yet?
A: Well, we’re currently out on our album Minus the Machine and then we have that live acoustic EP that comes out at the end of this month. But we’ll have a bit of a break from the end of this year until the beginning of next year, like November through January we’ll have a little bit of a break. So we definitely plan on getting back to writing. We don’t try to pre-plan or come at it with objectives or goals. We just try to go in and bounce ideas off of each other, let the music inspire us and sort of take the wheel and drive the whole project.

Q: Is it still much the same sources of musical inspiration which influence the band’s writing nowadays as during your early years?
A: Well, to be 100 per cent honest with you some of the current rock bands that we are really inspired by as a band are a lot of the Australian rock bands. There are so many good ones over there. Over here, it’s sort of in the same stuff; we’ve always been inspired by like the Deftones, Foo Fighters, A Perfect Circle and stuff like that. But that stuff’s been around forever. When we started finding the newer bands that we came across, (they) were ironically Australian. Like Dead Letter Circus, Closure in Moscow, Karnivool, Twelve Foot Ninja; all those bands are incredible.

Q: Those acts are starting to make some serious headway in the US too.
A: Yeah, they should. Like I said, I really like the fact that it seems like your rock world over there has a little bit more of a progressive touch to it, which really, really is what we gravitate towards, is to not just be very cookie-cutter and straightforward. But to be a little more musical and a little more progressive, and all those bands I just named from Australia are definitely like that, as you know.

Q: Any famous last words?
A: We hope to leave a great impact over there. Really win over some new fans, get back the old fans and we just really appreciate you having us back.