It’s a familiar story: a band starts getting its wheels turning when the guitarist leaves, so they start again with the bass player doing all the guitar parts. OK, so it’s not THAT familiar a story. But it is the story of hillbilly grind trio 12Gauge Rampage, and things were going along pretty well until our good friend COVID turned up.

“We had another band called Kvlt of Dahmer and basically our guitarist moved interstate so we started again,” explains bassist Glen Hurry from his home somewhere in the Blue Mountains, “writing music just on the bass rather than having guitar parts. We’ve only been doing it this way for about two years, in fairness.”

Two years is all the band has needed to make a healthy impression on the local extreme metal scene. 12Gauge Rampage has already released their first album, Unleash the Rage. Half the songs were done when they were still Kvlt of Dahmer, so they already had a foundation for the just on 25 minutes of sheer death-grind terror that has gathered them a wealth of support.

“I’d say 4 or 5 tracks were already completed. Some songs come together – like #killedmorecuntsthancovid, which is probably our biggest hit – me and Luke wrote that together in about an hour. Some come together easy and some are a bit more work, we’re still tweaking them all the time. It’s sort of endless. I guess the advantage we have, having only bass and no guitars, I can improvise a lot and I can change things very easily without having to show somebody or worrying about if they’re going to play it tight.”

Hurry won’t give away too much about his technique, but it’s difficult to tell 12Gauge Rampage doesn’t have a guitarist.

“Without giving away too many secrets,” he says, “the bass is bi-amp, so I’m playing through two guitar amps, and a bass amp. It’s a bit of a wall of sound. We auditioned a few [guitarists] and invited a few guys to come and have a jam with us. We just couldn’t find the right fit for us. A lot of it was probably down to whether it was someone we wanted to be hanging around with on the road for hours and hours, and in the rehearsal studio.”

Unleash the Rage has been collecting some positive reactions to its offbeat take on their chosen style, but current travel restrictions in NSW have prevented the band members from even getting together to rehearse. Before that, “Our calendar was full for the year,” Hurry says.

“Obviously it’s just been one cancelled show after the other. We’ve had to cancel our whole east coast tour. It sort of happened to us last year as well. We just started doing gigs and getting our name out there, and then the state shut down in the original wave of COVID.”

The only show for the band on the horizon now is the Canberra Metalfest in January. In the meantime, 12Gauge Rampage are doing everything they possibly can in the current environment to continue getting that name out there.

The band has already done some live streaming, and Hurry describes the experience as “weird”: “We did a livestream not long ago, and it just felt like a rehearsal with some cameras. It’s not the same! That energy that you get from the crowd that pushes you to go harder… you’re missing that adrenalin. It’s like an energy and it bounces back and forth, and you feel it off the crowd and you give it that little bit extra. In return, the crowd gives you that little bit extra back. The problem is, it’s a necessary evil at the moment. It’s the only avenue we’ve got.”

When shows were still allowed, they played a show in front of a crowd that was seated. As anyone who’s ever been near a death-grind gig can attest, that was very strange.

“We played a sit down show, and playing death-grind to a bunch of people that can’t move is ridiculous. Everyone loved it and we got so much kudos, and it was live streamed, and we got a lot of great feedback from it, but bloody hell – it felt weird. Everyone just sitting there, looking at you.”

So for now, Hurry and his bandmates have to be satisfied with working on new material. That’s proving to be a challenge in itself, however, with lockdowns separating the group across local government lines.

“We’ve got one song coming towards completion. It’s hard because we write really naturally. Me and Luke will bounce ideas off each other in the shed… maybe play this, or go faster, or do this. And without that interaction it makes it a little bit more complicated. We’re sort of working on material individually, so when we do get back together, we can make a start.” 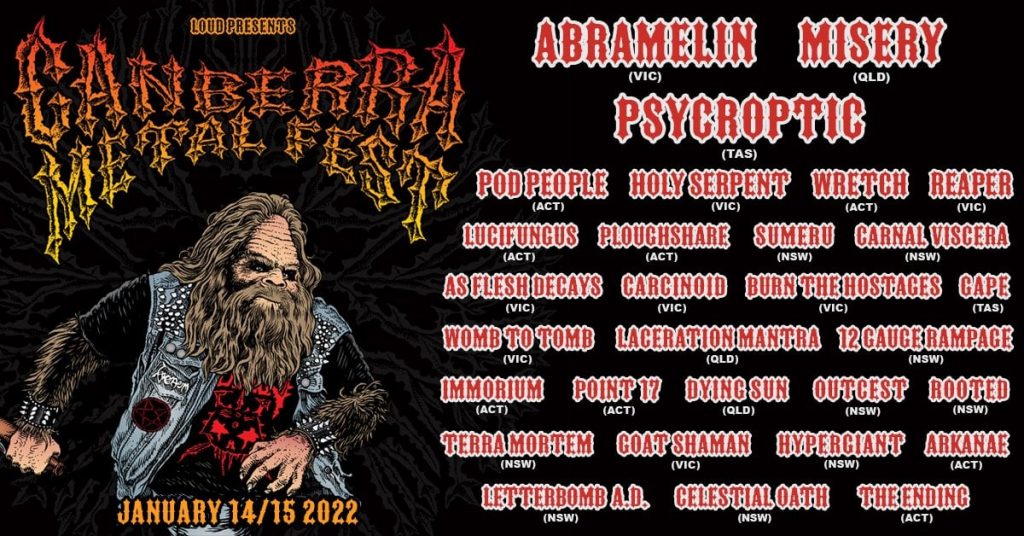