John Garcia is on his way to his home away from home again, and this time he’s bringing the Band of Gold – guitarist Ehron Groban, bassist Mike Johnson and drummer Greg Saenz – for a handful of very special dates. As he prepared to fly out, we caught up with the former Kyuss, Unida, Vista Chino, Slo Burn and Hermano frontman to talk about making music and his special relationship with Australia.

It seems like it’s been a few years since we’ve seen you here in Australia.
Yes, it’s been a while, but I’m very stoked to be coming back down there again and the band – Ehron, Mike and Greg, the Band of Gold, are very, very honoured and blessed to be coming back down there again. A lot of people were asking if we were still going to be coming down there because of the fires, and I of course said, “Abso-fucking-lutely!” There was no way this was going to divert us from coming back down. It’s an honour and we’re all excited.
We leave one week from tomorrow and we fly from LA to Melbourne, to Adelaide, to Brisbane and then we’re going to be doing Sydney and Melbourne and Byron and we’re just stoked!

You’ve always had a very good relationship with us here in Australia. Why do you think that is? Why does your music seem to resonate so well with Australian audiences?
Well, I think it has a lot to do with Metallica. When Kyuss first came down there, it was with Metallica and I think it tapped into a huge awareness of the type of music we were playing, and I think that’s the number one reason why I’m still able to come back down there: because of James and Lars and Kirk and Jason, at the time. It was a huge impact on us, and I’m still riding on the coat-tails of that tour. Because of Metallica.
I don’t have too many markets. The United States is not a market for me. Australia is a market for me. South America is a market for me. Europe is a market for me, but my home country is not a market for me. So I go where people appreciate the type of music that we play, and I’m blessed that I can still do something like this. It’s important for myself and Mike and Ehron and Greg, that we appreciate a market that is still reliable. That we can still go down to Australia and play, whether it be in front of 150 people or 350 people. It’s something that we appreciate and do not take for granted.

The latest record Band of Gold has a heavier feel to it than the previous album. It seems very much like you change up with every release, whether is be going back to the rock or doing something a little more psychedelic, you definitely try to do something different each time. There is very much a heavy rock vibe to the new album.
This was actually the first time that I did a solo record collectively with a band, and they were really an instrumental part of the writing process. I think that’s the difference. I think Ehron Groban, my guitar player, and me as the singer, and us writing together and presenting these songs to Greg and Mike and turning them into our own is something that should be talked about. Ehron Groban is a phenomenal writer. He’s a great writer and a great guitar player. He’s a diamond in the rough and a great overall individual.
This is going to be a great tour. Nobody has seen this type of band in Australia for years. Especially when these guys have helped create this record. This is not something that is mine – this record is theirs, and they bring it. When you show up and they open up with this song called Space Vato and they open up as a three-piece, powerhouse trio with no singer on it, this incredible instrumental that opens up the record… it is heavy, it is mean, it’s intense and when you see it live, you’re going to be blown away. These guys do not fuck around. They’re professional musicians and they’re my favourite band of all time. And they’re there for one reason only: and that’s to fucking bring it! And that’s exactly what they’re going to do. I’m just a part of this band.

So when you were in the studio then, did you just bounce ideas off each other and see where they went?
Yeah. Ehron and I, when we were together, we would throw ideas at each other and go back and forth. It’s gotta make us feel. Songs like Jim’s Whiskers, songs like Kentucky II, Popcorn (Hit Me When You Can), Lillianna… these songs just spoke to us. We’re friends, so we get in the studio and we’re having the barbecue and we’re throwing the ball around and the kids are there at the studio, so we’re hanging out talking and then throwing the ball, and then we’re barbecuing and then rehearsing and writing… this is a fun thing for us. It’s not a job. We want to be there. We want to be in that environment. We want to use Mike’s barbecue and go in Mike’s pool and go to Mike’s son’s birthday party and  get together and write and jam, and that’s what we do! It’s all fun. It’s all brotherhood-type shit, which we do. Everybody’s a husband and everybody has a family and everybody has full-time jobs. So for us to stop what we’re doing and give up our lives and go to Australia and play for you guys, that’s something that’s special.  So we’re just fucking stoked and excited about it all. 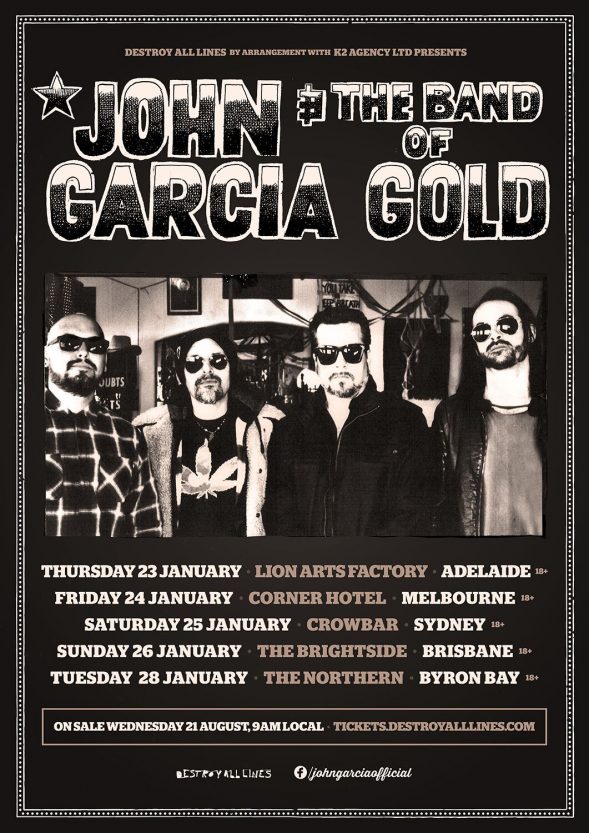