The Stranglers: Always the Sun

English rock band The Stranglers are returning to Australia to play to their loyal and growing fan-base. Their discography consists of many charting releases including seventeen albums and forty-one singles so there is no shortage of material to shuffle their set list around with relative ease. Still, fans can be assured the biggest hits will get an airing as with this long in the game, the band knows how to retain interest in those songs and add some variety.

Those of a certain vintage will recall the worldwide hits Golden Brown and Always the Sun on the airwaves of mainstream radio, oblivious to the lyrical content. Even though the line-up has inevitably changed from that era, The Stranglers are still a powerful live force with a mixture of melodicism and biting lyricism.

Astute and aware, co-founding bassist and backing vocalist Jean-Jacques Burnel begins his chat with Loud by offering empathy for the current bushfire crisis happening in Australia and states he hopes to ‘share your pain of which we have been witnessing and amazed by’ and that they would play here in all weather conditions. On that note, Burnel provides a succinct yet revealing chat about music and the band’s subversive response to some of the intriguing machinations of the industry.
You’re turning up to Australia again having last visited in 2016. Obviously, you don’t have your original drummer, Jet Black. Can we expect some surprises in the set list?
Well, I hope so because with us, we can change our set list every night which we try to do. So we never really know quite what we are going to be playing until the day. Over the years, our original drummer has had so many health problems that in total, we’ve had seven or eight drummers. At the moment we have a drummer [Jim Macaulay] who has been with us for eight years so he is sort of bedded in now.

In that case, there are not really any limitations if you decide to play an obscure track.
That is right; we have a lot of flexibility now with our song choices.

Since your discography is hugely vast with a variety of styles and experimentation, does putting together a set list feel a bit like mastering an album of different tracks?
Yeah, it is a bit because if you’re playing say an hour and a half, you want to take people along with you. So, you kind of create a narrative. It starts and ends with a middle area and you have to try to carry people with you. You do not want people getting bored. We, in ourselves, have avoided getting bored by, as you said, experimenting, sometimes successfully and sometimes not so, but we’re trying to see how far our limited talents would take us. If you’re into music, you’re not necessarily into one genre; you’ve got a broad palette from which to be inspired by.

For writing later albums, did you ever find yourself checking old ideas that may have been tucked away from the mid-seventies onwards?
No, ha-ha. Once a period had been passed, we moved on and didn’t really look back. Although, I do like playing some of the old stuff, I have to admit.

When EMI decided to give your band the door in the early eighties, the track ‘Strange Little Girl’ on the parting compilation album [The Collection 1977–1982], was an earlier demo that the label initially rejected. It became a hit.
That’s right, it was and I think they say that revenge is a dish best served cold. When we had a hit with Golden Brown, the record company didn’t want to release it initially. They said, ‘Oh, you can’t dance to it, it has a harpsicord, it is not punk and no one will buy it,’ but anyway, despite that, we invoked a clause in our contract so that they had to release it. They thought they could release it at Christmas so it would drown in the tsunami of pre-Christmas releases. But it just started working and became a worldwide hit. So, they wanted us to do a similar thing and asked, ‘Can you release another single of a similar thing?’, so we gave them a seven minute song in French [La Folie] and then we gave them Strange Little Girl which they’d refused only several years ago before; they had sort of passed on it. Then that was a hit so it was basically two fingers up.

Well, why not? Did you find that when you have a huge hit like Golden Brown that after a while, similar to say Radiohead with Creep, that you just started not wanting to play it?
Yeah, well, there have been times when we stopped playing it. I think that you have to be…if something is starting to piss you off or just to bore the pants off you, then you drop it. We’ve had other songs that we haven’t played for five to ten years because we fell out of love with them. However, then you rediscover them later on and then it is not only that you rediscover them but you also suddenly get the audience response for them. It just makes it worthwhile. So, yes, there are songs that we’ve dropped because we fell out of love with them and then you seem to rediscover them later, hopefully.

When that happens and they find their way back into the set list, does the instrumentation or the arrangements change to keep them interesting?
Oh yeah, of course. Fortunately they change anyway because the way you play things, over the years means that you play in a different way. Or you might find out that you are playing in a different way. Sometimes I will listen to old things when I am trying to relearn them and I will say to myself, ‘how the fuck did I play that?’ and that happens quite a lot.

Some critics got a bit upset about the subject matter of Golden Brown yet didn’t twig to the absurdity of some of the earlier material, lyrically.
Yeah but people get worked up about whatever it is that they want to get worked up about. That’s their problem, it is not our problem, fortunately. We just write about things that we know and I suppose that is the way that you touch other people, isn’t it? Whether it is consciously or subconsciously, you either commune with people or you don’t and if you do, you’ve got a chance of success.

You’re initially a classical guitarist and played with symphonies. It’s curious that when you picked up bass guitar, you played with a plectrum as opposed to fingerstyle.
Oh right, yeah but I just found a sound that I enjoyed and I cannot get that with finger playing. It was a completely new discipline to me to be playing with a pick as opposed to the classical way which is with your fingers and your nails.

What was it that took you from Segovia and John Williams to punk rock?
Ha-ha, yes, and Julian Bream. It was a complete fucking accident, to be honest. I won’t go into the details but I just stopped to give a hitch-hiker a lift and he happened to be in a band. I dropped him off and he asked me if I wanted to have a beer with the rest of his band. I didn’t think too much about it and then I must have given my address to one of the band members because a few weeks later because he turned up at my bed-sitter telling me that the band had all fucked off and gone back to Sweden. That was a guy called Hugh Cornwell. He said, ‘Yeah, look, it is just me and the drummer here. The Swedish bass player left his bass here.’ He then saw that I was playing guitar and so he said, ‘This guitar has got four strings on it, do you want to play it?’ and I replied, ‘Yeah, I’ll give it a try.’

Given your classical guitar experience, did you find the neo-classical guitar era comical?
Oh, not really because I never really laugh at other people’s attempts at any kind of music. I just think that it is fantastic if anyone tries. I would also rather not look my nose down at people that cannot play very well because I don’t think that becomes relevant unless they are not achieving their goals about touching people with their music.

I understand that. Did you ever cop flak from the hard core punk purists who thought you could play your instruments too well?
Well, yeah but they wouldn’t say it to my face. No one had the guts to say it to my face, ha-ha.

Would you say there is one particular album in your career that you’re most proud of thus far?
Hmm, that is bit like asking a parent with lots of kids, ‘Who is your favourite kid?’ and yes, there are a few albums which I do think are complete and I wouldn’t want to mess with at all. I think that they turned out well but there are others which I wouldn’t say came out as a hundred percent. So, there are a couple of albums where I think that from an artistic point of view anyway, that are whole.

If you look back to when the band started out, would you have ever envisaged that you would still be around playing live music today?
No, certainly not, no. No one does and back when we started out, bands would last a couple of years and they might even get a record out if they were lucky. It was certainly not to last and even in those days, the Rolling Stones had been around for fifteen years and we all thought that they were well past their sell-by date. But there you go, we are entering unchartered territory now. The industry nowadays is not just about being in the top ten singles every week, everything is different. 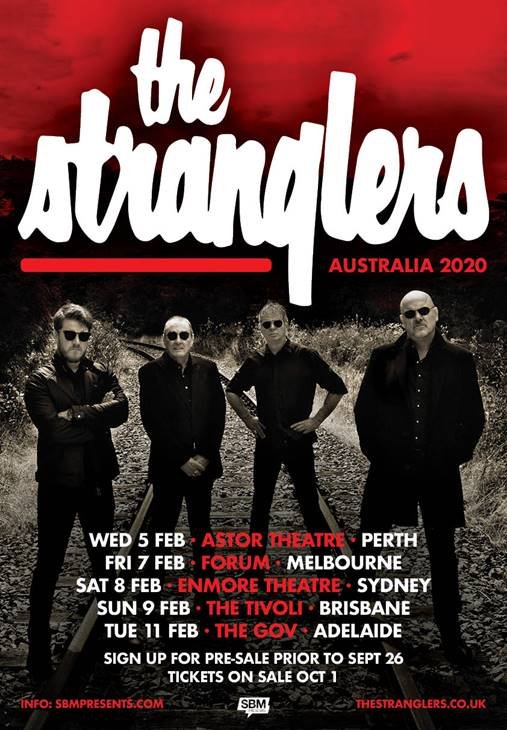