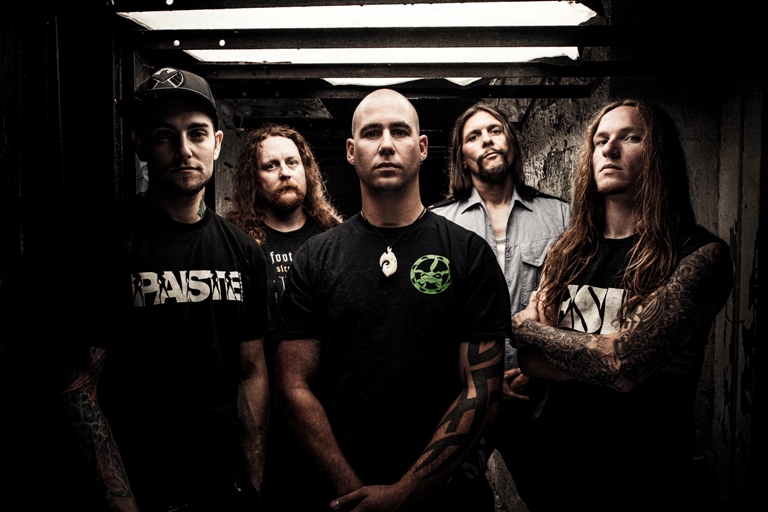 
Following a recent hiatus, one of New Zealand’s premier metal acts, 8 Foot Sativa has unleashed their first studio album in six years, The Shadow Masters. This follows a litany of line-up changes and other obstacles that would have likely killed off many lesser bands. However, they’ve not only survived, but thrived, as their crushing new record attests. Loud spoke to recently returned vocalist Justin “Jackhammer” Niessen about fronting the band again, the Kiwi metal scene, plans to tour Australia and more.

Q: You performed on the first two 8 Foot Sativa albums and although touring with the band at one point afterwards make a fully-fledged return on The Shadow Masters. How does it feel to be back in the ranks permanently?
A: I think the timing of the whole project and reformation has been perfect. Myself and the band are very proud of the new album, and I think had we tried at any other point of time to put this together it may not have come together as well as this did. I am rapt to be back in 8 Foot Sativa.

Q: How did your vocals change or develop during your absence from the band?
A: When I parted after (2003’s) Season for Assault I knew I wanted to continue singing, so I started vocal training to try and get a better control over my voice. This continued for some time, then when we hit the studio with (producer) Clint Murphy we all agreed – let’s get some different angles on what we do, try some different approaches to our sound.

Q: When you listen to the first two records and then The Shadow Masters, how do you feel?
A: I am proud of all the albums we have done and each one carries a certain time stamp for me; Shadows has really come some leaps and bounds. However, I do view it as a natural progression from (2002 debut) Hate Made Me and Season for Assault. Lyrically and musically, it is the next logical piece in the Sativa jigsaw puzzle. All angles have grown a third testicle.

Q: (Laughs) 8 Foot Sativa has experienced plenty of line-up changes throughout its history. Do you feel this has ever noticeably hindered the band’s progress?
A: I think when people left Gary (Smith, guitars) got to experiment with his music ability and diversity and so did Brent (Fox, bass), Sam (Sheppard, ex-drummer), etc. But if all the past had not had happened we would not be where we are today. All of us are so proud of Shadow Masters. If we had not gone our separate ways it may have exploded, and 8 Foot could have been over for good. Gary and Brent kept the band alive through thick and thin. I think in terms of progress being hindered, I think the band has always progressed well and made the best of every opportunity that has knocked on our door. Now we seem to be gaining ground, and new ground, which is the exciting bit. Who knows what’s ahead?

Q: Indeed. How solid is the current incarnation, especially compared to previous ones?
A: When we decided to get 8 Foot Sativa back together we met to see if it was the right time. We had briefly tried before, but I was just starting a new business and could not commit the whole hog. Gary was the driving force, and I wanted back in more than anything else as I knew the timing was right. We had Nik Davies (guitars) and Corey Friedlander (drums) with us, but we needed the Fox. We met with Brent and it was the quickest meeting in history. We are damn solid.

Q: Beyond a lengthy New Zealand run, what touring plans do you have in support of this new album? Is Australia on the itinerary at some point?
A: Yes we will – that’s an 8 Foot guarantee – be touring Australia, and our plan is this year. But we are trying to time a few things in a logical progression. We are currently doing 20 shows in NZ, and when that’s done we will be jumping the ditch to do some Australian shows. We have been inundated with people from Australia keen to help with promoting and touring advice, which has been very humbling. If the plan works well we should be there early December and again early next year.

Q: Good to hear. Does the band perform many songs from the two records you didn’t appear on live?
A: We have been doing some tracks off all the albums, but the tour we are on now we have stuck to Hate Made Me, Season for Assault and Shadow Masters.

Q: Where do you feel the New Zealand metal scene is at currently – is it well-supported?
A: The NZ scene is supported well by the metal community. It would be good if we had a bit more population to kick the numbers up a bit on the local level, but NZ has a lot of talent in metal and it is great to see people pushing the norm and supporting the shows. To make a dent, getting off NZ soil is key. We plan to be in the UK mid-next year to record and tour.

Q: From your own experience, how does the Australian scene stack up by comparison?
A: I can’t comment yet, ask me after we tour. But there are some fucking brutal bands over there and we are gagging to play alongside some of them.

Q: Australian metal musicians often reference the many obstacles they encounter attempting to make an impact on a global scale. Do New Zealand acts face many of the same issues?
A: I think NZ music is doing really well on a global scale. Metal however is always a bit tougher. We get a lot of support from people around the world, but yes, there are a lot of obstacles. But each day we try and move a bit further forward. Some days are better than others. We are not signed to a record label, so we just try and find ways of doing things to keep the momentum going. There are some good people here and in Australia who help us a lot, (it) might be advice or deals, etc. But if this game was easy everyone would be doing it. Play the hand you’re dealt is the way we look at it.

Q: 8 Foot Sativa recently released a greatest hits record. What have been some of the highlights/lowlights of your career thus far, and what goals do you still aim to achieve?
A: We have been fortunate to have so many cool things happen to us. Played with Pantera, Slipknot, Fear Factory, Soulfly in London; too many to list. But in terms of achievements to come, let’s start with an Australian tour and a new album in April/May 2014.

Q: Any famous last words?
A: Check out the new album The Shadow Masters.