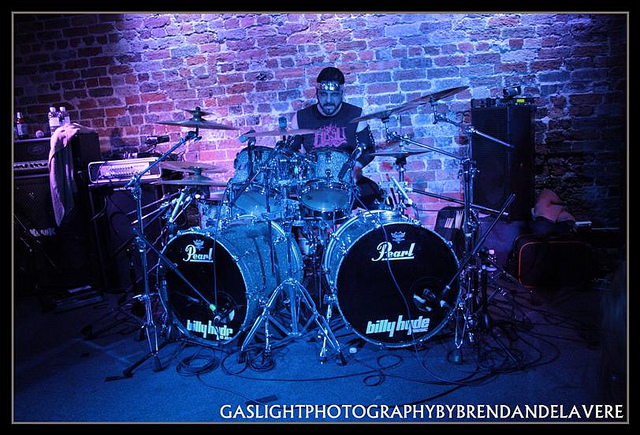 
Texan extreme metal innovators Absu are about to descend on Australia for the second time, following a previous visit here almost exactly two years ago. Led by drummer and vocalist Proscriptor, the mystical triumvirate will again be touring with Portal, and with Melbourne’s Denouncement Pyre.

“It was a very glorious experience, obviously, our first time there,” Proscriptor says of their initial tour. “The tour was managed exceptionally well. We also performed in Auckland as well, which was a rather magical experience. Playing in North America and Europe so much, it’s a nice change of pace to go to places like Australia. The standard of metal is exceptional; very hospitable individuals that you have there. So we are very much looking forward to returning.”

Absu’s last tour came shortly after the release of the second of a triptych of self-titled albums “primarily based on everything that is related to what Absu is all about,” to use the drummer’s words. The series follows up from the group’s previous trilogy built on Celtic mythology that was closed by 2001’s epic Tara. For this cycle, Proscriptor took some of his inspiration from art rock and worldbeat pacesetter Peter Gabriel.

“The next album will be titled Apsu, and this will be the third and concluding instalment of the trilogy, which is the Sumerian spelling of the band moniker,” he explains. “I refused to release these albums with unique titles as I simply wanted them to be all self-titled, but differentiating in the spelling: the album in 2009, Absu, being the English translation of the word, Abzu, the last album which was released in 2011, being the Mesopotamian. It’s basically an idea that I adapted from Peter Gabriel’s first three solo albums. They’re all titled Peter Gabriel. I wanted to differentiate it a bit with the slight changing to the spelling of the band name.”

Gabriel might not be the first point of reference one thinks of when it comes to Absu, but given Proscriptor’s interest in Celtic and Asian structures and the British singer’s efforts in popularising world music the connection isn’t too difficult to understand. As he also points out, the connection goes deeper than that.

No one should expect Apsu to sound anything like Genesis however. Proscriptor is promising more, shorter, and less elaborate songs than can be usually found on his band’s albums.

“This album will be vastly different from the rest of the albums within Absu’s discography because what we will do with this album is that this album will contain more songs than any other Absu release,” the drummer says. “We’re striving for approximately sixteen to eighteen songs. They’re going to be shorter pieces, not as epic. More street-wise, street-tough, to-the-point songs with the duration of each one between two to four minutes. […] Eleven of them are composed now.”

Apsu will be the second album Absu has recorded with the current line-up, the band’s second since re-activating in 2007 following a five-year hiatus in the wake of Tara. During that time Proscriptor continued to work with bands like the thematically-similar Melechesh and other personal projects such as Equimanthorn, a dark ambience act also featuring foundation Absu guitarist Equitant Ifernain. Musically, he says, it won’t be far removed stylistically from Abzu but the technical aesthetics have improved.

“With this particular line-up that I have now, with Vis Crom (guitar) and Ezezu (bass/vocals), I think we are adapting better with one another as far as the arrangements and the compositions and with how we formulate the music, and so it’s gonna be a different album. It’s more technical but at the same time, we kind of retroverted ourselves and striving for more traditional heavy metal instead of the standard, mundane black/death metal style. I’m also trying to fit in a little of the flavour of the more progressive albums.”

The next album will bring the conceptual exploration of Thelema and occult mysticism to its conclusion. Given that Absu has performed key albums of previous song cycles in their entirety, this album too may one day get similar treatment. While it isn’t out of the question, Proscriptor’s role as both drummer and vocalist can make things complicated at times and fans shouldn’t anticipate seeing anything like last year’s Tara tour of North America here in Australia.

“We executed [Tara in full] in April and May of last year and embarked upon a full North American tour. My drum tech, who is also in numerous bands and is also the bass player for Woe who are our Candlelight labelmates, was able to get behind the kit while I was able to do basically a complete wardrobe change and went into full character to sing the last song on the album. Some of those songs are a little difficult for me when we play them all simultaneously,” Proscriptor says. “Unfortunately we’re not going to be able to bring (Grezgorz Czapla) to Australia in March to do something like that. But, of course, in the history of Absu we have played Barathrum: V.I.T.R.I.O.L. in its entirety so it could be a possibility. You’ll just have to wait and see.”