Acolyte: Out of the Black

Home > Features > Acolyte: Out of the Black

Melbourne progressive/hard rockers Acolyte’s profile has been on the rise during the past 12 months. The release of their Shades of Black EP resulted in them supporting Twelve Foot Ninja and touring Australia in support of the release.

Now, the band is hitting the road again from September to November in support of the final single to be issued from Shades of Black. They’ve unleashed an epic eight-minute video for ‘Space and Time’, set amid desert dunes and featuring the powerhouse vocals of Morgan-Leigh Brown. ‘Space and Time’ is the final track on Shades of Black, and this will be the last tour supporting it before the band releases new music in 2018.

Loud spoke to David Van Pelt (keyboards) during a busy schedule at his day job as a secondary school teacher about shooting a video on a budget, their next release, winning over uninitiated crowds and more.

Q: You’re headed out on the road again soon. Does it typically take the band a few shows to get dialed into tour mode, or do you have it down-pat these days?

A: We’ve got it pretty much down-pat these days. We’ve done so many tours; I think this is going to be our fourth Australian tour. So you just get to the point where you know what to expect, everyone knows what their role is, and it’s very clear what the objective is. Everyone just sort of switches on. The hardest part is honestly leaving the last gig and then going back to your day jobs and everything like that. But when it comes up to the tour we rehearse a lot more, and it’s funny, you just switch that button and everyone’s on and we know what’s going on. Which is handy.

Q: Is the band essentially self-sustaining in terms of the money you earn from playing shows and selling merchandise, or is it also a scenario whereby you’re all injecting your own money to some extent to pursue a passion?

A: That’s a really good question. How it’s worked in the past is it’s been to an extent a little bit self-sustaining where you’ll do a big tour, and that will pay a lot for T-Shirts, buying T-Shirts and all the rest of it, and designs, and being able to put things out that we want to put out. Like Morgan makes an array of candles and all this other stuff, so that’s worked for that. We’ve been lucky enough to meet a lot of people along the way who we have like a reciprocal relationship where they’ll promote us by taking lots of photos, and then we’ll promote them by circulating the photos around. So we sort of save costs a little bit that way.

But when it comes to big things, we shell out a lot more. We’ve got a system set up where we do almost like a direct debit, I guess you could call it each week where each member will put aside what they can. So whether it’s $20 a week or something, and that just goes into a band kitty, which you forget about. And then you add on top of that the self-sustaining money that you get from doing the tours, the shows and everything. So you go, ‘oh cool, we’ve got all this’, so we haven’t had to pay technically out of our own pockets straight up for accommodation and all of that sort of stuff. But when it comes to new albums, when it comes to making big deals with media, then we have to shell out of our own bank. But everyone knows that it’s a passion, it’s never like, ‘oh shit, now we have to do this, do that’. By having this direct debit system you’re literally paying for something without even realising it.

Q: Have you already started writing for your next release? And can you tell us about the band’s songwriting process?

A: The next album, we’ve actually got about seven songs. But the issue is there’s about four or five in there that are 12 minutes long. So we’ve got an over-abundance of stuff, which is great, which is always what you want to pick from. But usually in the past how it has worked is the band will just jam on some riffs in rehearsal. But with this album it’s been a mixture of that, but mostly individual members going away and creating blueprints, then bringing it in, and then us jamming on it and bringing our own flavour to it. Which has worked really well.

It’s been an interesting transition period, because everyone’s got a different flavour of how they write songs. Jase (Grondman, bass) really loves just coming into rehearsal and just jamming. I’m one of those people who I just sit there and if I get an idea I have to record it straight away. And if that’s a whole song then it’s a whole song. Chris (Cameron, drums), who’s the other main songwriter, he is exactly the same. So we all play to our strengths, and then when I bring in full songs, I’ll just say, ‘yeah, but just add your bit to it’.

We’re all very lucky in that everyone in the band knows it’s all about the music, so we don’t, or very seldom get into those arguments where it’s (mock yelling), ‘it’s got to be like this’. People get passionate, but it’s very open and open to experimental things. And everyone’s got different strengths. Chris loves crazy time signatures, so they come into songs. Jase is really massive on distorted bass and loving working with bass effects and ambiences, but also still really thick bass riffs where the bass is right up in the mix. And I love melody; melodic, neo-classical shredding stuff (laughs). So you put all of those things together and you get a very unique combination of vintage stuff with new stuff.

The new one when it comes out will be very different musically. We keep calling it ‘Acolyte on steroids’ or Acolyte 2.0 (laughs). It’s still, there’s these massive, epic songs – and when I say epic I’m not trying to sound up myself or grandiose or anything like that. But really big, ten-minute, ups and downs, lots of time changes, a lot of atmospheres, and a lot more fire I think than in the first album. But it still sounds like an Acolyte album. If you compare the first with the second, the second’s got a lot of injection of power into it (laughs), which is great.

Q: So you’re recording that next year?

A: At this point in time we’ve finished professionally recording four of the demos. We’re wanting to probably record another six or seven, maybe even more because we’ve got so many. What we’re going to do late this year after we finish the tour is go through and listen to each one, and work out what we’re missing. Do we need a softer song here? Do we need a faster, shorter one here? So, long story short we’re hoping to get into the studio early next year, and then obviously tour as much as we can when we release it. Not just here in Australia, but internationally too.

Q: The only time I’ve seen the band live was supporting Twelve Foot Ninja, and it’s fair to say the vast majority of the crowd were previously unfamiliar with Acolyte’s music. Despite that, the band exuded a considerable degree of confidence on-stage. How challenging can it be to approach a situation like that?

A: We have to do that pretty much all the time, because we’ve been very lucky in supporting some fantastic bands where we’re obviously massively the underdogs and everyone’s there to support the headliner. But we feel like what we’re doing is unique enough that we can be paired with a heavy metal group or a progressive group, we can be put in to support a softer band as well. I think that confidence comes from knowing that what we’re doing is a bit unique, but also that we really love what we do, which always works well.

We have a great time. It’s not one of those bands, and I’ve played in so many bands where you over-think everything… We’re very specific with how we want the music to sound, but we know that as soon as we hit that stage we want to have a great time and win over as many people as we can. With that mentality, you sort of go into it hoping for the best, and then doing the best you can (laughs). And if at the end you get a few more fans from it, fantastic. And if you don’t, hey, you tried. But if you’re ever going to go out there you’re not going to win people over by standing here looking like you’re hating life (laughs).

Q: The band’s new video for ‘Space and Time’ certainly is eye-catching. Being an independent band, how difficult can it be to make a video that looks professional and can compete with numerous other bands overseas, while being contained within a strict budget?

A: That is the number one question, that is the one thing that bands that are starting out have to answer. Because at the end of the day you’re in this competition, because that’s what it is, where you’re with a billion other bands. And how do you make your one stand out without destroying a budget, and you then can’t afford to buy gear or go on a tour?

We’ve been incredibly lucky in that Morgan, she has just got tremendous vision with how she wants things to be in videos. And we all trust her implicitly because she’s never ever failed, and even if she did we’d still trust her. But she’s always got these new and really captivating ideas for film-clips. Which is great, because we’ve gone through that era of, here’s a band, standing in a dilapidated factory, with maybe some dry ice coming in now and again, you know? (laughs)

On top of that, she’s also one of those fantastic individuals who in her career has met amazing people who are photographers, videographers, who are so interested in the project because it’s different. She tends to make videos from an element that’s like, ‘whoa, I haven’t seen something exactly like that before’, or ‘why are they doing that in the desert?’ (laughs) And then get people involved who then go, ‘okay, we can do it for this, but if you can promote us…’, and again, we have that reciprocal relationship, then you’re able to do it for less because both people are benefiting. That is honestly, I think if bands are going to make it in the future and try and make a big splash in Europe or wherever else, you have to have those relationships with the people that you work with, because otherwise… I’ve paid one-fifth, I paid two grand for a video about seven years ago in a different band that looked 70 per cent worse than ours (laughs), and didn’t pay that for this one. It’s really about having that vision, and then getting as many people on board who are willing to support you and get their vision of it out too.

A: Thanks to Loud for the support, and definitely keep an ear out, because if you like the first album, the second album is going to kick you in the guts (laughs). It really is taking what worked on the first album to a whole new level. 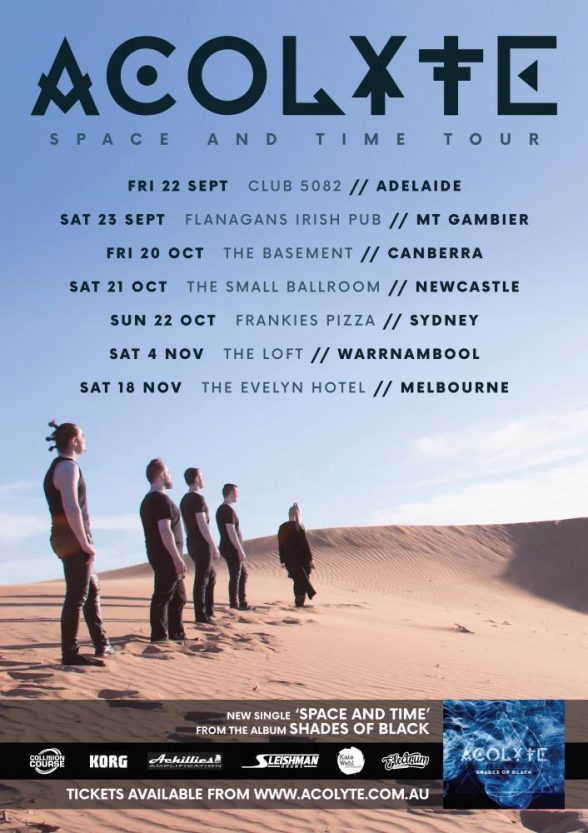