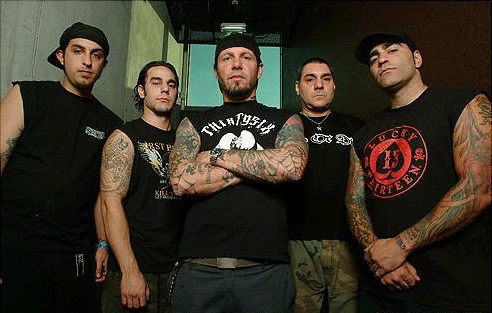 Agnostic Front: Do it Their Way

Home > Features > Agnostic Front: Do it Their Way

Throughout a 30-year career, New York hardcore/punk/crossover crew Agnostic Front has become one of the most beloved and respected acts in their field. With blistering new album My Life, My Way about to hit stores, Loud got vocalist Roger Miret on the phone to talk about the new record, working with extreme metal mastermind Erik Rutan, cross-pollination in heavy music, the possibility of penning an autobiography and more.

Q: There’s not a great deal of subtlety in the new album’s title – it’s typically in-your-face Agnostic Front fare. Was it your intention to be as simple as that?
A: Well, you could say it is [laughs], but really, that’s life. It’s been my life – my way and it couldn’t be said any better, you know?

Q: Indeed. My Life, My Way was recorded with Erik Rutan – who is obviously best known for operating within the extreme metal world – while you also enlisted Freddy (Cricien, Madball vocalist and Miret’s half-brother) to produce it. How was the experience of working with Erik?
A: As you know, Erik you could say is considered more of a ‘metal guy’, but he definitely delivered a fantastic hardcore record. I mean, Erik’s diverse; Erik heard the band and wanted to keep the band to its true style. He heard all the demos and he wanted to keep it, if I can use the word organic, and natural hardcore, ‘cause that’s what the band is best at. So it doesn’t make any sense to try to tweak stuff too much. I think Erik did a great production job considering we gave him some pretty true, classic, anthem type of hardcore songs.

Q: Is he much of a hardcore fan?
A: Oh, absolutely, Erik’s an Agnostic Front fan. Agnostic Front has always been that band that crosses… We’ve been considered a crossover band forever, so Erik’s one of those guys that’s been following Agnostic Front forever. He was just honoured to do this record and it also showcases how he can do things. He’s not just (being) pigeonholed into something; he was relieved that he wasn’t doing like a crazy metal record, ‘cause he says those take like three months, and it’s a bunch of technical stuff. We go in there in ten days and we knock it out, that’s just the way it is.

Q: Was it the band’s crossover sensibilities that encouraged you to work with someone like that, without fear of backlash from purists?
A: Well, we went to Erik… Freddy from Madball was the producer and he had just finished doing (Madball’s) Empire and he got really good vibes from Erik. He thought Erik was just the right man for a change-up for our band and to deliver the sound that was necessary. We’re not afraid to work with anybody. But if you’re not that familiar with what we do, it takes a lot to make a band sound completely over-produced or wrong. There’s no such word as ‘over-produced’ – it’s just production done wrong. We’re not afraid to work with anybody, but we’ll be clear to let them know how we feel and the direction of how it should be.

Q: Aside from the production values, in what other respects do you feel the new album is a step up from recent releases?
A: As a step up, I think the songs are definitely catchier than our past few offerings. They’re more sing-a-long, more anthem-y. From all the reviews I’ve got and all the people I’ve been talking to, they don’t really feel like there’s a bad song on the record. People after they hear it just sing along, it’s got that feeling, that really true hardcore type of edge to it. It’s nothing that’s new. I mean, nothing that’s new, but what I’m trying to say is it’s a little refreshing, it’s really cool to sing along to.

Q: Do you feel that the ‘true hardcore edge’ you referred to is missing in a lot of music that gets dubbed ‘hardcore’ these days?
A: Well, hardcore to me is more of the lyrical aspect of the band. The music of course has the angst to it, or whatever element it needs to have to bring the song across. But lyrics to me is what hardcore has really always been about. I mean, even in the old days everybody had their own distinctive sounds. A lot of the stuff that happens today… It’s easier to start a band, say you’re hardcore and have an instant audience, you know? Then eventually most of these guys that aren’t really hardcore, they’re something else, then they change their sound to what they really want to be. But that’s the easiest way to get an instant audience. But if there’s a lyrical message, something really important to say then it’ll be true and real forever.

Q: Where did you derive your lyrical inspiration on this album from?
A: It just comes from my heart. Comes from my life, my way – the way I’ve done it, the way I do things. It’s very simple; I live a very simple lifestyle, I’m a simple type of person. I live pretty much by three rules in my life – pride, faith and respect. Without any one of those three, then what’s the point in living for? I speak about social-political stuff, some things happening around me on a day-to-day basis. It’s very simple, but very direct and it’s really about shaping up and keeping our movement strong together.

Q: You mentioned being a crossover act throughout the band’s career. What’s your take on all of the cross-pollination that has occurred within heavy music during the past half-decade or so, particularly the fusions of metal and hardcore?


A: I mean, I like any music done right, you know what I mean? I’ve always felt like there’s always been a lot more in common between metal and hardcore than there are differences. At this point I don’t know, but when it all started out, everybody was walking kind of out of step with society, it was an outcast (thing), you know? I feel like it’s come the same way; it’s not like the norm to have long hair and tight pants or a Mohawk or a shaved head and tattoos. Today, it’s a little different (though), today it’s socially acceptable. But when it all started out, it was kind of very different. There’s a lot of similarities in the music, it’s a very angry music, (both are) very aggressive. I think the only difference is lyrics. I mean, some of the metal bands; I can’t get into any of the Satanic stuff, because that’s not the kind of life I lead. But that doesn’t mean you can’t like Slayer – Slayer’s a phenomenal band too. It’s just tastes, I like a lot of everything.

Q: I interviewed Mike Muir from Suicidal Tendencies recently and he said when their first album was released, the punk fans said it was “too metal” and vice-versa. Did you encounter much of that same resistance and hypocrisy early on?
A: I mean, when Suicidal’s record came out, and other bands’ albums back then… We kinda liked each other’s music and I guess we were getting influences from each other – hardcore from metal, metal from hardcore, each way around. It was just weird, you know? But overall I think the responses to all our records were really good, but it was just a changing period, music was evolving and people were changing it. Change is important, change is part of growth and that’s what we were doing in those bands, we were growing. We were becoming musicians or just experimenting with our sounds and that’s how it came out.

Q: Interesting. Shifting topics, is there any likelihood of the band returning to Australia as part of the new record’s touring cycle?
A: I really want to go back to Australia – it is one of our goals. The album’s going to come out and usually with an album we tour about two years out of it. It’s a lot, we try to tour the world and there’s a lot of going here and there. I’m a family man too, so I like to spend time at home with my family. But I do want to set it as a goal for us to hit Australia, Japan, New Zealand and Asia for the first time.

Q: Great to hear. On a more personal note, after a few decades in heavy music have you considered recounting your experiences in an autobiography?
A: Yeah, I’ve been doing that for quite a while. Because I’ve had children, because so much crazy stuff has happened in my life I haven’t been able to finish it. I started writing a book back in 2001; I lost it a couple of times after a couple of incidents. But this year, it’s also a goal of mine to actually complete this book. I have a friend who can actually help me complete it, ‘cause he understands my (situation) and said he wants to help me finish it, which will be great.

Q: Is there any new music you’ve been enjoying lately?
A: To be honest with you, I always find myself listening to is the same stuff I always grew up listening to. The Clash, Thin Lizzy, Bruce Springsteen, those are bands I really love and always have loved. I listen to a lot of early hardcore as well. As for newer stuff that’s out, I’ve been listening to my brother’s record Empire a lot, which is a great record from Madball. Terror has a good record out, Sick Of It All too. There’s a lot of good stuff out there. But I always tend to find myself listening to the same stuff that always inspired me years ago.

Q: Any famous last words?
A: [Laughs] I want to thank everyone in Australia for supporting Agnostic Front and being there for us, and just hardcore in general. We will be there – last time we were there we really enjoyed it. Thanks for supporting us, buy the new record and keep hardcore alive.