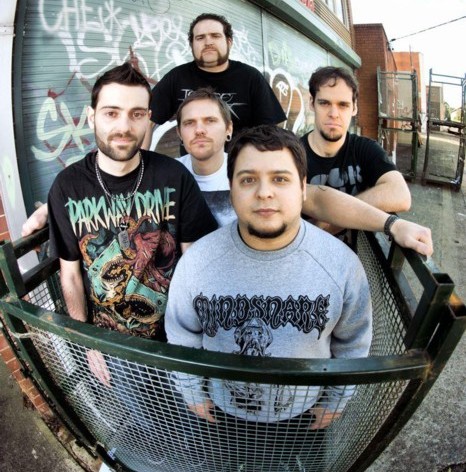 Alice Through the Windshield Glass: A Brutal Awakening

Home > Features > Alice Through the Windshield Glass: A Brutal Awakening

Latest releases: Brutalis Australis (RTD)/Dethlehem (independent)
Website: www.facebook.com/alicethroughthewindshieldglass
Sydney brutalists Alice Through the Windshield Glass have been building towards the release of their album since it was recorded more than a year ago. The departure of vocalist Dave Stanton held up their plans for a while until he decided to rejoin the band a few months back. With Brutalis Australis now available – and a Christmas EP called Dethlehem for download from Bandcamp next week! – Loud caught up with guitarist Adrian Sahid:

Congratulations, the album is out at last. You must have been a bit worried there for a while that it was never going to see the light of day.
It has been a long journey and we did think at one stage that it wasn’t going to be done. But thankfully it has.

So tell us what happened with Dave leaving and then coming back again?
Towards the end of last year, he basically told us his heart wasn’t really in it anymore. He didn’t want to be part of something if he wasn’t putting in 100% of the effort. We just said, fair enough. Nine months down the track, we hadn’t had any luck with any vocal auditions and Dave approaches us saying that he had a reawakening. He did guest vocals for a friend’s band and basically at that moment realised what he’d been missing. He asked us how we were going and we said we’d had no luck so he just joined up again and we were very happy to have him back.

I saw you play at the Sydney Bastardfest show and it seems to me that there’s a bit more of a groove to your sound now. Was that intentional?
Well we didn’t intentional say, Well, let’s add some groove to our music. What we did though was, it was very simply just maturing our sound. Grant the other guitarist is the main song writer, and he listens to a lot of bands that are very reflective in what we’ve written.

It appears that you’ve developed a bit of a look for yourselves as well.
Ah well, when you’re entertaining people you’ve got to go the whole hog, I guess. We just felt that our stage presence needed to go beyond just the usual band shirts, black shirts and whatever. We play basketball unofficially for a bit of fitness and fun and I’m a massive basketball fan, so we thought, Why not Alice jerseys? With the album being released we had a promotion going where you could win yourself a jersey and then we printed some more to wear on stage.

What have the shows been like now that Dave’s back in the band?
We feel more comfortable. We did two shows without him. One was instrumental because we didn’t have a vocalist… it wasn’t the same. We had a different sound going to compliment the fact that it was just an instrumental, but the bottom line is it wasn’t the best. After his first show back, we were back on top.

You’ve done a lot of touring. Even before the first CD was released you hit the road pretty hard.
Yeah, we like to expose ourselves as much as possible. We haven’t been able to do a lot of shows lately but we are looking to get back on the road.

And there justy doesn’t seem to be anywhere for bands to play anymore.
Well I’m sure that with other kinds of bands, they can still book a show pretty much anywhere. But with metal and more aggressive music, there isn’t as many places to play and then there’s council regulations and pokies that seem to be replacing live music.

You’re about to do a show where you play the album from beginning to end. Are there any songs on it that’s you’ve never played so far?
There’s two or three songs that we haven’t played that we are looking forward to opening up live.

How challenging is that going to be for you? How often have you played them through since you went in to record them?
We try to through them at least once every practise, so we all have some idea of what’s going on. They’ve turned out not to be as difficult as we originally thought, so they’ll be up to our usual standard by show time.

It’s not something that too many bands do. What was the idea behind it?|
The fact that not many bands do it! The last time we saw a band do that was actually our good friends in Recoil v.o.r. They released their first album The Will to Sin and we supported them that day, and they played the album from start to finish and we’d never seen any band apart from an international do that here before. We’d heard to occurrences like when Slayer played Reign in Blood but it doesn’t happen very often. We’ll only ever play some songs that any particular time.

Do you think that will help you choose which songs to play live, or have you already got a pretty good idea from all the shows you’ve done already?
We’re very much believers in adapting our songs that we play depending on the audience we’re playing to, the demographic we’re playing to. If we’re playing to a more extreme crowd we’ll play more extreme stuff and if it’s more of a mosh-friendly crowd we’ll choose a different set.

Even a lot of metal fans probably wouldn’t necessarily be into your style, so how have you found the reaction to the band around the place?
Again it just depends on the demographic we’re playing to. If we’re playing to a crowd that is specifically our genre, we obviously get a much stronger response. For example, at All Shall Perish last year we did quite well. This year at Bastardfest we got a strong response, but not as strong because obviously the music at Bastardfest is quite a range of extreme metal. We’ve never really got a bad response. It’s always been fairly decent.

So what’s next for Alice Through the Windshield Glass?
We’ve got the album launch and then two further shows next year. We have one at the Shenanigans Festival in Canberra in February and the Bloodline Festival in March, which is a charity event in Brisbane.

Have you played that festival before?
It will be the first time playing Queensland! We’ve had such bad luck trying to get to Queensland. Every time we’ve tried to go up we’ve encountered either floods, cancelled gigs or double booked gigs. So we’re glad to be able say we’re finally going up.