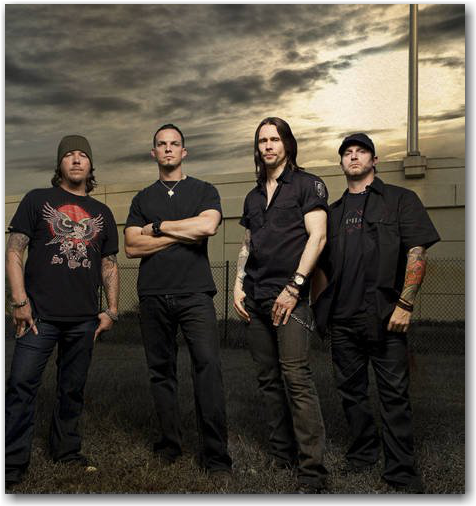 Latest release: ABIII.5 (Roadrunner/Warner)
Band website: www.alterbridge.com
Most people don’t even get to be in one successful rock band. Bass player Brian Marshall has been in two. And even though one of those bands has been both revered and reviled in equal measure and spent time as close to the biggest rock act in the world, Marshall has no problem standing outside in a thunderstorm to do this interview because he can’t get a signal inside his house.

“Yeah, it’s a blessing man,” he says pleasantly, with a slight Southern lilt. “To be able to play with these guys, and do it twice! The planets really had to be in line for us. I think that, every step of the way we’ve had our up and downs. We’ve been through different management companies and different record labels but I think we’ve really reached our happy place now where we have a bigger audience and it’s cool to be able to do it at the level with some great guys.”

Cynics take delight in suggesting that Marshall’s latest group Alter Bridge and his former act Creed – which reformed in 2009 – are really just the same band with different singers. It might surprise them to hear him more or less agree, particularly with regard to the first Alter Bridge album One Day Remains.

“Well initially a lot of material on One Day Remains was kind of a throwback. A lot of that material was meant for Creed,” he says. He is quick to point out however, that Alter Bridge was always looking to move away from that sound and such comparisons. It was a consciuous choice that led to the selection of Myles Kennedy as the band’s frontman.

“When we were auditioning singers we wanted to get as far away from a baritone as possible, and Myles was a perfect fit. He’s a great guy, he’s a great guitarist and adding that other guitar has been a big step in the evolution of Alter Bridge away from Creed. They’re both great bands and there’s a chemisty in both bands that you just can’t deny.”

Reviews for the band’s 2010 album ABIII all strongly suggested that Alter Bridge is now a very distinct entity from the group that spawned it, and critical reception towards their live performances have often been been glowing. While it was also a choice for Alter Bridge – Marshall pronounces the name as two distinct words, emphasising the second – to maintain a lower-key profile compared to the multi-million selling, arena-filling Creed, it also wasn’t easy to adjust. The last time Marshall was in Australia, Alter Bridge opened for Disturbed. He admits it was something of a come-down.

“We had the opening slot and we played for like thirty minutes. It was a bit of a disappointment being the first band there. We’re coming from three guys who played with Creed, a pretty substantial band before… we were playing arenas.”

Since then of course, Alter Bridge’s own star has ascended, with III’s metal-laced hard rocking single “Isolation” hitting #1 on Billboard’s Hot Mainstream Rock Tracks chart. Feelings of both accomplishment and relief followed this achievement, coming after years of struggle and frustration with management concerns and revolving-door record deals. There was also the battle of starting again from scratch in the wake of Creed’s bitter bust up in 2004.

“It was little frustrating,” Marshall says matter-of-factly. “I’m not gonna lie to you. But at the same time, it was a lot of a sense of accomplishment, what we’re feeling now. We learned to take one step at a time. [But] I like playing shows. It don’t really matter if was [just] 500 people there – which there were a lot of times on those first tours – but just to see it grow and flourish… just to see it grow! We knew it was gonna be a struggle. We knew it wasn’t going to be easy, you know, especially going through different record labels and management companies and that sort of thing.”

Those early struggles inspired their material, and sheer determination and self-belief was what got them through to their groundbreaking moment when “Isolation” became the most-added song on US radio playlists.

“The inspiration and the struggle and the drive to try to keep the band alive and keep doing what we wanted to do, that’s when Blackbird really came out. It was a little bit of a darker record,” Marshall says. “There was a lot of blood and sweat, a lot of sweat and a lot of tears and just getting past a lot of personal things in our lives. And we went on. But just to see it grow and take it one show at a time and see it eventually with a #1 song in the States, “Isolation”… to see that happen… we’d gotten close before, but we’d never got to #1. Once we got to #1, people started turning their heads.”

As they do. Australian heads turned as well, putting ABIII as high as #2 on the local iTunes Rock Album chart. To thank the fans and give them “something to get excited about”, as Marshall says, the band has released ABIII.5, a special edition of the album that includes three bonus tracks and a DVD featuring a ton of live footage and other extras.

“We got a lot of DVD footage [from] the managers and production guys… and interviews and interviews with fans and stuff like that, and it’s something that we’ve put together to kinda give the fans something else before we got over there,” Marshall explains.

He’s keen to get Alter Bridge over here too. It will give them their first opportunity to front the fans on their own terms, at two sold-out Sidewave shows. They’ll be accompanied at those dates by Steel Panther, about which Marshall is quite enthusiastic.

“It’s gonna be really cool,” he says. “I’ve seen them a fair bit and I’ve met the guys and they’re just really witty and funny in the way they interact with the crowd. It’s gonna be a really fun show. I don’t know if we’re gonna end up getting onstage with them and doing some kinda jam. More than likely that will happen, because they’ve been known to just pull random people up on stage and have a jam off with different musicians and try to embarrass them basically! It’s gonna be fun.”

The Soundwave festival itself will also be a platform for Alter Bridge to introduce themselves to an even wider audience.

“We’re really excited about coming over and playing to some of these bigger festivals and connect with an audience that we wouldn’t normally be able to do right now,” Marshall says. “Soundwave is gonna be really good for us, getting back over there and building the fanbase.”

As much as he is excited about playing the shows, he’s also dead keen on checking out plenty of the other bands and looking forward to simply being in Australia.

“It’s a really cool line up. It’s gonna be great for eveybody. I’m lookin’ forward to seeing Hellyeah and I’m looking forward to seeing Limp Bizkit, System of a Down, some heavier bands. In Flames. I just can’t wait to get up there and do it and mingle with some of the other artists and meet some different people. And plus we’re doing it in a really cool place. We’re just looking  forward to it.”

Following Soundwave, Alter Bridge may take a back seat for a few months as Marshall, guitarist Mark Tremonti and drummer Scott Phillips get back together with Scott Stapp to work on songs for another Creed album. Marshall’s relationship with Stapp has been famously rocky, but when he talks about him today, there’s nothing but warmth in his voice.

“We’re doin’ great,” he says when I ask how they get on these days. “We got together January 6 and we spent ten days together writing. He’s doing really good. He’s lucid and he’s really involved and he’s gone through a lot of personal changes and it’s all for the better and he’s communicating and it’s really been a good experience for me. I’m looking forward to playing more music with him.”