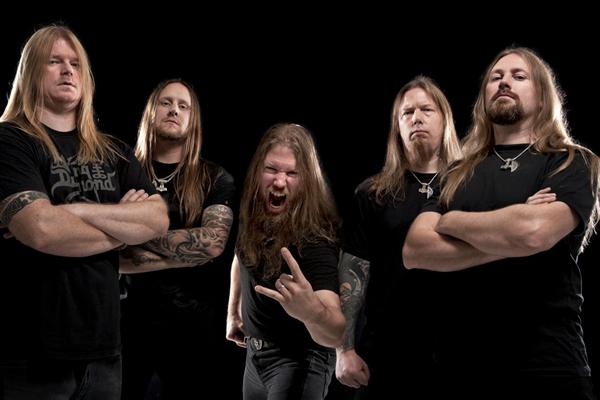 Amon Amarth: Rise of the Giants

Latest release: Surtur Rising (Metal Blade/Riot!)
Website: www.amonamarth.com
Over the last decade Sweden’s Amon Amarth have established themselves as a force to be reckoned with in melodic death metal spheres by way of a string of solid and consistent albums that explore Norse mythology and pre-Christian themes. The band’s eighth album Surtur Rising continues that legacy and has collected some of the group’s best reviews, scoring 4.5/5 at Allmusic and 90 per cent score on Blabbermouth. Just ahead of their current tour, Loud caught up with drummer Fredrik Andersson and asked for his thoughts on important issues.

Q: The reception for Surtur Rising has so far been great. Are you satisfied with the response?
A: It’s been really good. We obviously thought that we had a good album, so we were 100 per cent confident and we felt satisfied with it. So far most the responses have been positive. I just read today the Blabbermouth review was a 9/10, which I think is excellent. On there you can see what the fans think about it, which is pretty good as well. It’s good times.

Q: Being the eighth album from Amon Amarth, how do you think Surtur Rising stands up against the back catalogue?
A: It’s our most put-together album. It feels more well thought out than anything we’ve done in the past. For us, it has to do with the fact that we did have a plan that we were working towards and we knew what we wanted before we started writing it, and we were always working towards that goal. And I think in some terms, the album I guess… We wanted it to be a lot more harder and aggressive than it is, but when you listen to the whole album it works. It has a natural flow that we’re very happy with. Music-wise, it covers our whole background, our whole history. We were trying to write songs in the way we were writing them in the past, more old school style. And that combined with the newer, better quality production brings out the best qualities in Amon Amarth.

Q: So it was conscious decision to do that?
A: Yeah. We wanted to make a more heavier, aggressive album to go back to our roots a little more. To be more old school in the song writing and the riffing. That’s what we were working towards. All the songs they have their own identity and their own life and it’s not always that they turn out the way you think they might when you start writing. We let the songs be what they want to be.

Q: How did the writing process go down for Surtur Rising? Was it more individual efforts from single band members or was it more of a team effort?
A: It’s a bit of a mix actually. We meet up in rehearsal room and we do most of the work in the rehearsal room. But obviously when we realise that we’re not going any further, we take the decision to take a couple of days off, everybody works on theirs (songs) at home and we meet up again in a couple of days and see if we have any new ideas. I think that’s the mix of that that makes it work smoother for us to record an album. A couple of years ago we would probably stay in the rehearsal room until we have the songs done, but now we say, take it away, get it some air and see if doesn’t work out we’ll just leave it. The main production takes place in the rehearsal room when we’re all there, and also the songwriting. We need to be all gathered, and Johan [Hegg, vocals] is listening to what we’re creating and he gets his inspiration from what we’re doing when he’s writing the songs.

Q: You used Jens Bogren again for production. Why did you decide to work with him again?
A: We weren’t sure about going to Jens this time. We were considering a couple of different options. We had a meeting with Jens and he shared out vision with where to go over this album and he had some ideas that he wanted to bring in. It’s more important to us to have someone who is 100 per cent dedicated to what it is they’re doing rather than someone who just wants to get the cheque when the job’s done. So we went with Jens this time. But obviously if there’s someome who we feel has the interest and has something to offer us as to where we can go from here, we’re willing to experiment. But we’ll make that decision when the day comes.

Q: I noticed there were some covers recorded for the bonus tracks in “War Machine” by Kiss, “Balls to the Wall” by Accept and “Aerials” by System of a Down. The SOAD choice has definitely raised a few eyebrows.
A: [Laughs] One of the reasons was the fact that we wanted to surprise our fans and everybody. We do hear comments about us being predictable and we’re always doing the same thing, so we decided to do three covers and the first two were pretty obvious to us. But the third one, we couldn’t really decide what to do. We went to Japan during the recording for a show and one of the nights we ended up at a karaoke bar and that song [“Aerials”] came up. It has kind of a history with the band. We had a big argument about whether it’s a good song, when it came out 3000 years ago or whenever. That song came up and we were all screaming it and having fun, and when we came back home… I can’t remember who came up with it, but we thought we should give that song a try. That would be kind of a challenge for us as musicians and it would also be us doing something unexpected. So we thought, let’s do it.

Q:You have a pretty extensive tour coming up for Surtur Rising, including some “An Evening With…” shows. What was the idea behind that concept and what could fans expect from those shows?
A: It’s gonna be in mid-size venues like 800-2000 capacity. The reason behind it was… we had a different plan that we were going with but that didn’t work out. So our second choice was to do a small headline tour in between the UK and the European tours. This tour got booked so late that we were unable to find a suitable support act, either they didn’t have time to do or there was some band that we weren’t happy touring with. So the booking management came up with this idea that we thought would be something new for us to try as well. It would be a challenge for us, and something fun too. So we thought we’d give it a try and see how it works out.

Q: Do you have any good memories or stories from your previous Australian tours?
A: Obviously the first time we went there it was quite an experience. It was a new continent and it’s exciting. Also, the weather is constantly nice there, so it’s one of our favourite places to go because it’s such a relaxed atmosphere. We also have some good friends and old friends in Melbourne, for example, so it’s always nice to go there and meet people you know and have a couple of beers.

Q: Amon Amarth were one of the original bands in the early days of the melodic death metal scene in Sweden. Do you think the scene is as strong as it was back in the day and what do you think of today’s current crop of metal bands?
A: The underground scene is not as big anymore. At least I don’t think it is. There were a lot of more underground shows and more people showing up then as there is now. The major scene has grown a lot, and the metal scene in general gets more attention, although I don’t think that’s just Sweden, it’s worldwide. I have a hard time with the new pop-metal wave bands that sound like pop bands but they have distorted guitars. I can’t stand that, personally. But you also have to realise that, one thing that kept metal alive for all these years is that it’s always evolving, and it’s always changing, so you have to embrace the new sound as well.

Q: Have you discovered anything lately that you would recommend?
A: I recently discovered a Finnish band called Swallow the Sun that I thought would sound like… H.I.M., or something much different to what they are. They remind me of old Amorphis and Anathema or My Dying Bride or something like that. I think they’re pretty cool. That’s spinning in my car at the moment.

Q: Being in an international touring band, how would you say downloading affects a band like Amon Amarth? Do you see it as a good thing or a bad thing and why?
A: It’s definitely come to stay. The most negative effect it has on us is the fact the new album leaks before it is released. We knew it was gonna happen and we thought we were prepared for it. But the day we knew that it *had* leaked, the kind of disappointment that you feel is undescribable. It’s not the fact that we want to sell albums. Obviously it’s important to sell albums because that’s how the industry works with the record label and management and all that, and it’s the only way to measure how you’re doing. But it’s something we make and something we create and we put all our energy and creativity into it. Everything from the cover and the songs and the lyrics and everything, and then people just bastardise it by leaking it onto YouTube. It’s very disappointing I guess. But when it comes to sales, we’ve been constantly growing as a band since we started out. So far every release has increased in sales and it hasn’t had any negative effect on it. The only thing we see is that bands like Iron Maiden sell a tenth of what they would do ten years ago, so it exists. It’s something you have to live with as an artist, but it’s something you get over after a while. It’s only just before the release that it’s such a hit in the face.

Q: Finally, if you had to choose three songs from Amon Amarth for a showcase for people who had never seen you before, what songs would you play?
A: That’s a pretty brutal call when you have over a hundred songs to choose from! I would probably go with “Twilight of the Thunder God”, “Töck’s Taunt” from the latest album and maybe… “Fate of Norns”.