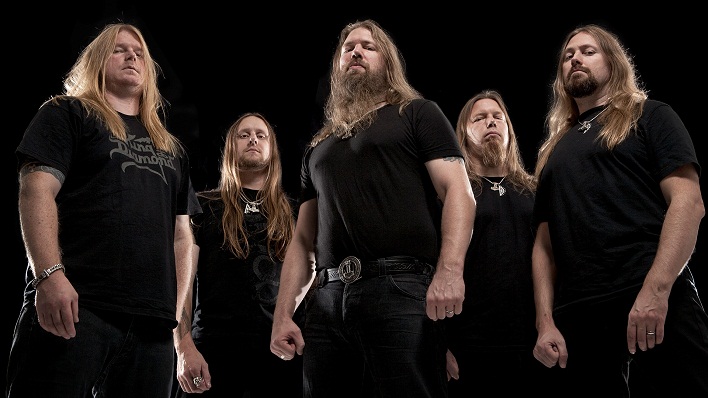 Amon Amarth: Of Warriors and Gods

With their epic style and heroic sagas, Amon Amarth have been on a steady rise to fame over the past decade. On tour across North America in support of their latest album Deceiver of the Gods, their success has finally allowed the Swedes to bring their entire stage show with them for the first time so audiences west of the Atlantic can finally see what they are truly about.

“It’s been very cool,” says guitarist Johan Söderberg on the line from Boise, Idaho on the second day of their twenty-plus date run through the States. “This time is the first time we’ve had a big production here in the US. We always have the full production in Europe, so it’s very nice to be able to show the people here how we usually look. How we’re supposed to look – our show.”

Consistency has been the key to Amon Amarth’s upward momentum, with a series  of well-produced and heavy albums exploring Norse myths and historical sagas. It’s a style and sound that has become the band’s signature, one that gradually propelled them to the vanguard of the European metal scene and has now seen them taking on the world with swords and steel singing. But there is danger in consistency, a risk of becoming too complacent. Amon Amarth shook things up a little this time by switching studios and bringing in Andy Sneap to produce instead of Jens Bogren, who was responsible for the previous three albums.

“It’s always difficult to come up with a theme or a sound,” Söderberg admits, “but that’s why we like to use a new studio and different producers, to have a fresh start. If you use the same studio for a long time, you get comfortable.”

Without meddling with the formula too much, on Deceiver of the Gods the band chose to take the focus away from old heroes and instead built the storyline around that of one of the gods themselves, specifically that sower of chaos and discord, Loki. The subject matter has brought back the darker feel to their trademark rousing style that has gradually slipped away since much earlier works like Versus the World. It’s something Söderberg promises was quite deliberate.

“It was mainly because we thought that the last album had too much of a polished sound,” he says. “We wanted a rougher sound, something that had a bit more of a darker edge to it.”

The change doesn’t appear to have done the band any harm. Deceiver of the Gods, the band’s ninth album, has also proved to be their biggest to date, charting in the Top 20 in the US, Top 10 in Canada and their home country and cracking the Top 5 in Germany.

“It’s been amazing everywhere,” Söderberg says of the reaction to the album. “It went into the charts in Germany at #3, just under Black Sabbath! I think our last album only went to #7, so it’s really a great improvement.”

Deceiver of the Gods also afforded the band the opportunity to once again work with one of their heroes. Previous releases have featured guest appearances by the likes of Apocalyptica and Entombed’s LG Petrov. On this album, former Candlemass vocalist Messiah Marcolin adds his inimitable touch to  eighth track, ‘Hel’.

“We met him about half a year before we started work on the album. We met at a show we did in Stockholm,” the guitarist explains. “We met him and we talked about maybe doing something together, and he said that he would be happy to do something if we had a song that would suit him. So we called him up and showed him the song and he came over to the studio and spent a couple of days with us working on the song.”

As mentioned, Amon Amarth is now touring America the way they’ve always wanted to.  They have a touring budget that allows them to take along their full production and travel in relative comfort.

“It’s very cool touring the States now,” Söderberg says. “In the beginning you have to drive yourself in vans, but now that it’s been six or seven years we can afford a nice bus.”

The crowds are soaring also. They may not be on the scale of the massive European festivals, but in Australian terms they still represent pretty staggering figures.

“On this tour it’s up to about 20,000 people at some of the places we play, but of course in Europe at festivals it’s 100,000 at Wacken or the Download Festival. I still don’t think we have reached the peak of what we can achieve when it comes to how many people we can play in front of.”