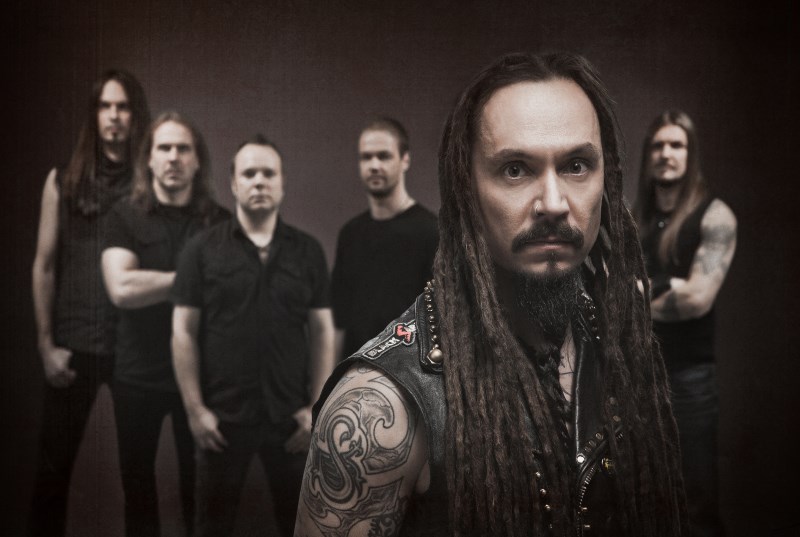 Amorphis aren’t the only Finnish metal band to have graced Australian shores since Impaled Nazarene became the very first one to do so back in 1999, and they aren’t likely to be the last. They won’t even be the last this month, with Stratovarius and Korpiklaani to follow them later in October. Metal music is huge business in Finland, so it’s very likely the trend will continue into the foreseeable future. Amorphis vocalist Tomi Joutsen is partially at a loss as to why his country, with its small population, appears to be such a healthy breeding ground for so many metal bands.

“Maybe it’s because that in general in Finland the metal scene is getting bigger,” he offers. “Twenty years ago we didn’t have any big metal bands, but since then there has been bands like H.I.M. and Nightwish and Children of Bodom. I think that’s the main reason why there’s so many bands coming from Finland. Their music is played on the radio and they are of course very popular and so because of that maybe there are more bands coming along.”

The three bands that Joutsen mentions have sold over 1.6 million albums in Finland since 2000, more than Madonna, Michael Jackson and Bon Jovi combined, so a healthy market for metal definitely exists there, even if the reason for the seemingly disproportionate appreciation of the form remains elusive. Unlike Amorphis, who have been frequent visitors to the Finnish Top 10 since their third album Elegy in 1996. Their latest release Circle marks the band’s third consecutive #1 album in their homeland. Yet again, the album is a concept piece, but this time lyricist Pekka Kainulainen presented the group with an original story instead of one adapted from the epic Kalevela poem cycle. This idiosyncratic method of songwriting, with the lyrics and music composed by independent parties, is also a problematic one, as Joutsen points out.

“It’s really difficult,” he admits. “Whenever we start working on a new album, we always have a lot of songs. Like, when we started on the Circle album, I think we had about twenty songs. But we didn’t have any vocals lines or any lyrics for the album. And when I work on them, I try to think about where I should put a clean vocal, where should I put this growl or this harsh vocal. And that’s the only thing I have. Then we sent all the songs to Pekka who wrote all the lyrics for this album. For me as a singer it’s really hard when I start to record the vocals because I have to arrange all the melodies with lyrics and with songs. So it’s really a challenge for me and sometimes it takes many hours for me to have just one song completed. And also, our lyrics are in Finnish and we have to translate it into English. So it is really stressful. It’s a lot of work and lots of time.”

It would seem the band could save themselves a lot of time and effort if they merely kept the lyrics in Finnish. But singing in their native tongue quite simply isn’t an option Amorphis is likely to consider.

“It’s very interesting you know because sometimes when you are singing heavy metal in Finnish, to my ears it just sounds very strange to my ears,” Joutsen says. “Now we have a lot of bands singing in Finnish in the metal scene, but that wasn’t happening fifteen years ago. Everyone was using English, and now there are some Finnish-singing heavy metal bands. For me, it just felt natural [to sing in English]. I know it would be easier for us and it would probably be faster for us also, but I just feel more comfortable using English. It just sounds better I think. Maybe one song it would be nice to do [in Finnish] some time, but at this moment I don’t see any reason to.”

As he notes, there are Finnish metal bands that sing in Finnish, but Joutsen believes that it’s a rather harsh sounding tongue.

“It sounds quite aggressive. Even if you’re really happy, it sounds like you’re swearing all the time or something! It’s kind of like German, I think. Some metal bands here it sounds all right, and if you are from FInland of course you can understand what they are singing about, but of course if you’re not,” he says with a laugh, “it just sounds like a black metal band, you know!”

There were whispers of an Australian tour around the time of 2009’s Skyforger album but nothing came of it. As luck would have it, their long-overdue first visit to these shores coincides with an absurdly crowded touring schedule that will pit them against Devin Townsend the night they play in Sydney as the country enjoys what can only be described as a veritable glut of foreign metal.

“Having two big bands playing on the same night,” Joutsen says of their clash with Townsend, “that’s a bit unfortunate for a lot of the fans who probably want to go along to every show they can. For us, I think there will be a lot of Amorphis fans who come of see us because we haven’t played down there before.”

Despite this being their first Australian appearance, Tomi Joutsen isn’t promising anything different from any show that Amorphis might play anywhere else. He does promise quality and quantity though, and something for everyone.