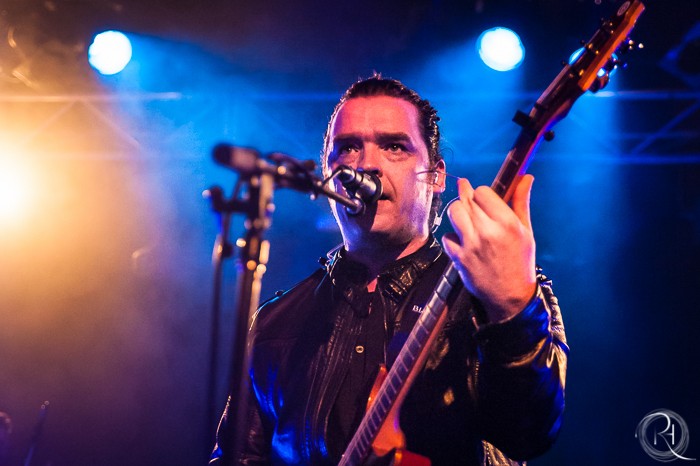 Anathema: No Looking Back

Home > Features > Anathema: No Looking Back

Anathema took more than twenty years to finally visit Australia, and then played to sold-out crowds every night. The tour was such a hit with both band and audiences that we decided to catch up to frontman Vincent Cavanagh for a little post mortem and to talk about what we can expect the British progsters might deliver in the future. For Anathema, that could be as much of a surprise to them as it is for everyone else.

Thanks for your time, Vincent. It took twenty years to get Anathema here, so did the tour live up to your expectations?
Oh God, yes. Australia more than lived up to our expectations. The best thing about the country is the people – super friendly, really easy to talk to and super easy to have a laugh with everyone. That’s the main thing I’ll take away from the place. Unfotunately, we didn’t really get a chance to see any sights or do the touristy thing, but we met really cool people, and the gigs were fantastic. So it was brilliant.

When you mention that we’re cool to have a laugh with, I have to say that watching your show here in Sydney, it certainly seemed like you were all really enjoying the show.
Well you know, it’s part of our upbringing in Liverpool, you know. Everyone takes the piss out of each other. It’s kind of in our DNA to just be informal and there for the right reasons. It’s the same off the stage as well – doing the VIP stuff and meeting the fans, that was easy. It was really great to meet everyone. There’s some bloody interesting people out there.

Apart from the problems you had with the meet and greet in Melbourne, everything seemed to go very well. I was actually really surprised with the number of people who came along to check you out.
Yes – Melbourne was sold out, wasn’t it? We couldn’t believe the size of the audience we got in Australia. It was a pleasant surprise because it was our first time over there and we had no indication of what type of audience we had over there, so we just had to arrive and see what happens. We were blown away. I think it bodes well for us coming back out there. I’d like to play a big event in Australia, as well, and see how we go along with a bigger crowd. Something like the Soundwave Festival – that would be cool.

That’s definitely the show that everyone wants to get on board with these days.
If it’s too late to do it next year, then the year after that. We have a pretty broad spectrum of music too. We could pretty much play at all styles of festival, you know.

Anathema could definitely fit in with almost any festival these days.
Yeah, it’s funny that. We’ve got a pretty diverse range of music, and it’s only going to broaden in the future. At the moment we’re working on songs here at my place – Danny and John are here – and it’s looking good for what we’re gonna do next. It’s gonna be another step forward and another broadening of our scope. We’re really into that kind of thing. We’re never content to sit in the one place and repeat ourselves, even if it’s successful or not. We’ve never been afraid to try new things. It’s what we do.

There’s still that metal base to your music, but Anathema has changed so much from the early 90s to now – how far do you think you could go with expanding your sound?
Well, there’s a helluva lot. For a start, the one we’ve only just scratched the surface of is electronics and that kind of thing. That’s a whole other universe in itself. I don’t think any one thing will ever take over the band’s sound, there’s always a broad input on stuff on an album, but there’s definitely new ground we could cover. No doubt about it.

Of course there will always be the die-hards who want you to play heavy metal, but really Anathema has never really been just about that.
No, we never really were. And we’ve always stuck to our guns, from the beginning until now. And to be honest with you, I don’t think our philosophy or approach to writing music has changed a helluva lot. We’ve always been open. I just think we’re beginning now to strip away some of the things you think you needed in our adolescence. Stacks of heavy guitars – you don’t really need that. You can do that in different ways. It’s a similar thing with singing. You don’t need to scream or do a death grunt to be intense as a singer. Look at Jeff Buckley or Cedric from The Mars Volta or people like that. They’re way more intense than some guys in death metal bands. To me it is, anyway.

It gets very hard to describe the sort of emotions and textures that are apparent in Anathema’s music now. It’s just a very broad palette.
Exactly. Everything we do is about emotion. Everything we do is there to move you. The ideas that we choose to work on are only the ones that get us in that way. If it gets us, then we’ll follow it.

I got the impression from your live show that it was deliberately in two halves. It seemed to me that you moved through various movements during the performance. As you’ve never played here before, was that a very structured, careful selection of tunes?
Yes it was. With the amount of different stuff we have, it’s interesting to put a set together and play all different music. We could conceivably do two or three different nights in the same venue and do three completely different set lists.

Have you ever thought about the possibility of doing that?
Um… yes. It’s an idea that’s floated around but nothing’s come of it just yet. We’ll see how it goes.

How are the new songs coming along?
Pretty well. They’re all just in their infancy right now. We’re just going through a lot of ideas. We’re going through Danny’s at the moment. It’s taken two days just to listen to everything. It’s a massive, massive well of ideas to draw from.

So is there always a lot of ideas that you don’t use right away and come back to later, or discard?
Some will get shelved and some might get released later in a different way. Some turn out to be really good and find their feet when they find out what they wanted to be in the first place. If one hits us immediately then we know, well, ok, this is a fucking tune! We’ve gotta work on this. Those ones are obvious.

Some of the songs on the Distant Satellites were actually quite old, weren’t they?
The chord progression was tweaked a bit and changed a bit, but the basic chord progression for the song ‘Anathema’ has been around for more than ten years. We actually tried it a bunch of different ways and it eventually found its current form, which is the way it was always intended to be. It just depends sometimes. It can happen really, really quickly. You should never force it. Never force it and release it just because you feel you need to. If it’s ready, it’s ready. If it’s not, just don’t do it.

Is that part of the secret of what keeps your band going for so long? It’s been 25 years now. Is there a secret for keeping a band together for that long?
It’s all in the song writing. To keep it interesting for ourselves, it’s the song writing part that fuels it all, really. We’re all such intense critics of ourselves. It doesn’t matter what has won critical acclaim, it’s what we think of it that really matters at the end of the day. If we think we can improve on something, it doesn’t matter whether people liked it or not. We’ll just try something out. We feel it internally.

Has there been anything that you’ve done in the past that you’ve really hated and would choose not to revisit?
Songs you mean? (laughs) There’s probably a few, but I don’t really think about them that much. Once they’re done, they’re done. It’s been a long time since I’ve seriously felt that bad about songs. There’s been one or two over the last couple of years that maybe haven’t turned out as well as I thought it might, but I still play them live and they’ve got a new lease on life when they’re played live so it’s all right, you know?

Many songs only reveal their true character when they’re played live.
Absolutely. That’s why I’m looking forward to playing a few more off the new album. We’ll see how that goes. We’ve got a few more we want to do and we’re rehearsing next week, so we’ll get them in the set.

Well, thanks Vincent. I don’t want to keep you from your work any longer. Is there anything final you’d like to say to the fans in Australia?
Yeah – get us on Soundwave! (laughs)