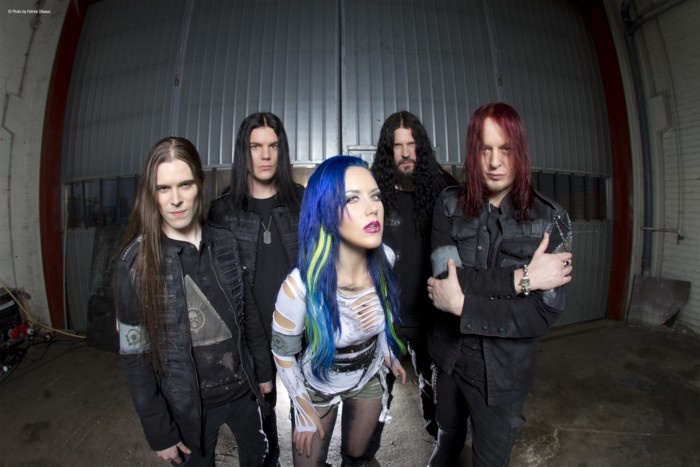 Arch Enemy have always done things their own way. Rising to prominence when powerful German singer Angela Gossow fronted the band, their melodic sound was able to compete in both the extreme metal scene and also crossover to a wider audience within metal circles, regularly providing them headlining status on the international touring circuit. Their ninth album War Eternal now sees the band continuing to tour successfully. Earlier in the year, the striking Alissa White-Gluz joined the ranks as the new vocalist on said album, replacing Angela who chose to focus on managing the band. The album also marks the first release with tour initiated guitarist Nick Cordle contributing parts having replaced the somewhat restless Christopher Amott, brother of ongoing band founding, guitar virtuoso Michael Amott. Gearing up for more shows, bassist Sharlee D’Angelo spoke to Loud Online about all things Arch Enemy related.

Now you’ve got a new vocalist with Alissa White-Gluz from Canadian band The Agonist. So, are you enjoying educating Alissa about old seventies rock bands?
Ha, yeah! Her musical background is a little bit different than the rest of us so we’ll break her fairly soon. She’ll be saying, ‘old man music, again’. The funny thing is that Nick [Cordle – guitar] is actually younger than her but he has the musical taste of an old man.

On latest album, are there older influences that are more apparent, driven by yourself and Michael’s [Amott – lead guitar] writing?
It is very much a mixing bowl of things. Everything goes in but we have our roots in very different places be it eighties thrash like Metallica and Slayer or the German version of thrash with Kreator and especially Destruction. But then it is also very rooted in the European and eighties metal as well. Lots of other things like old classic rock and melodic rock all goes into a blender when we write music. We do like the edge but we also like the melody. We don’t really take the melody into places like other melodic metal bands do but you can hear with some of the Swedish bands in the melodic death metal scene a very obvious Iron Maiden or Helloween influence whereas we take the melody from somewhere else outside of metal. Everyone then is different where they come in. For the time that Nick has been in the band, we’ve played him some melodic music that he wasn’t familiar with before. Then he comes up with a riff or a melody and you can hear an impact of the stuff he’s just heard but it is still him. Everything goes in.

Your previous album, Khaos Legions had an expanded edition with a bonus disc of cover songs. Was that a lot of fun to do and did you enjoy releasing it on vinyl?
Absolutely and we especially liked it on vinyl. I’d like to keep it as vinyl to get people to buy it and hear it. As far as cover songs go, it is always fun when you have the time to re-imagine things and make your own reinterpretation of songs. It also allows us to show people our influences as otherwise they may wonder about that since we play some sort of extreme music. They may think that we only listen to that sort of thing. It is a good thing to show our melodic roots a bit.

Does it give a sense of band unity doing that too?
Yes because that is how we socialise most of the time. If we are not playing our own music, we’re listening to other people’s music, especially on tour. If we are on a bus in Europe or America, the late night activities usually are sipping good bourbon or drinking a good beer and we’ll have the war of the iPods, seeing who can guess what band is being played. We have a lot of the same influences and either way, if you really like something, it makes its way into your own songs somehow. Or you just flat out cover somebody else’s song because you love the band, the artist or the song itself.

How do you separate the songs you write into either Arch Enemy songs or side project songs and ideas?
The music makes its way into where it likes to live the most. A chord structure and a melody can be arranged in any which way. If you try to figure something out but if it doesn’t really stick for Arch Enemy yet is a good idea, you might use it for something else. Then, in that musical environment it is better suited so it all comes naturally.

Do you find that using certain producers will guide the content in that way too?
It has always been our own vision but the producers we have worked with have never really been involved in the creative side of things. It is more to do with the sonic side rather than re-arranging things. We’ve never really worked with a Bob Ezrin or Bob Rock type of person. We wouldn’t be opposed to doing that but we’ve probably come too far to do that now. It is really hard to teach old dogs to sit, you know.

Have you changed your pre-production and arrangements process?
We have usually done it the same way every time. We usually get together in a room and bounce ideas off each other. People bring in musical ideas and then sort of back them up on top of each other to make up a nice tower that won’t fall down. It is just trial and error. This time with War Eternal, we’ve changed the method a little bit. This is the first time we did it with more home demos. The first couple of songs that were finished were songs that Michael and Nick had done, sat down in America and fiddling around with guitars and a drum machine. Then some of that was played together and tweaked a bit. It was half of that for this album with the more modern way of doing demos which is just putting a few microphones up in our rehearsal space and making some really bad demos. You don’t want to make the demos too good because you fall in love with demos and find it hard to recreate it. So long as the general idea comes across then the shittier the demo, the better.

Then you can ask Alissa to sing over it or guide her accordingly?
Exactly and that is sort of how it worked this time. It was good because we had listenable demos that we could work with so when she came over, her and Michael worked a lot on vocal arrangements. If Michael didn’t have lyrics, she’d come up with some and ended up doing lyrics for five of the songs on the album which is basically half of them. They then worked back and forth on vocal arrangements and little lyric changes which was a new thing for her. In her old band, The Agonist, it was four guys doing music and then she got to do whatever she wanted with it. She didn’t really meddle with the music and they didn’t really care what she did on top of that. So, I think for her it was a little bit of a change that we were extremely into how the vocals were arranged and performed. It all worked out for the best as she added things that we didn’t have before, both lyrically and musically, vocal wise. She definitely put a mark on the album.

Australian audiences might know her from performing back up vocals with a recent Kamelot tour although that was more high end register material being sung.
Yeah and that is the thing. The Agonist is an extremely intense band with everything at once, all the time. It is extremely dense music with a lot of things happening. We did wonder if she would be comfortable with our more drawn out and epic things with longer instrumental passages and whatnot. But then, her having worked with Kamelot for a long while meant she is comfortable and familiar with that sort of thinking so it worked out perfectly. She is very experienced in a number of things both musically and personally that really fit the bill.

Bass wise, you use an Ibanez Iceman. Is that now set for life?
Nothing is ever set for life. At the moment I’m really happy with it and have a great relationship with the company in both America and Japan. They’ve got good distribution but so far I’ve never had a reason to change. Never say never but for now, I have no reason to change direction.

Metal has a lot of aesthetics so I was wondering if that was stopping you going back to Rickenbacker basses?
I still love Rickenbackers but the ones that I had in the day are old instruments that were toured into the ground. I’ve had bass guitar necks broken on flights several times so had them reset every couple of years and getting them refretted is like giving an old man new crutches and saying, ‘get out there again’. It is not really fair. I haven’t played them in a long while but do still like them as instruments. Who knows, I might go back to my roots.

On the other, heavier side of metal, do you think Arch Enemy will ever get into the seven or eight string guitar sounds and so on?
Ah, it is possible but I think that we are traditionalists. We dabbled a bit about ten years ago with alternate and low tunings but it is a little bit of a hassle. We’re a bit too old school for that. I personally don’t like the feel of five or six strings on my bass and first and the foremost, the aesthetics of it are just appalling to me. I don’t like the look of it. To me it doesn’t belong in metal. I know I am being stupid and old school snobbish about it but that is the way that I feel about it. I look as six string basses being more for studio cats and professional musicians that play slap bass style. Nothing is wrong with that but to me it is just, ‘ah, no’.