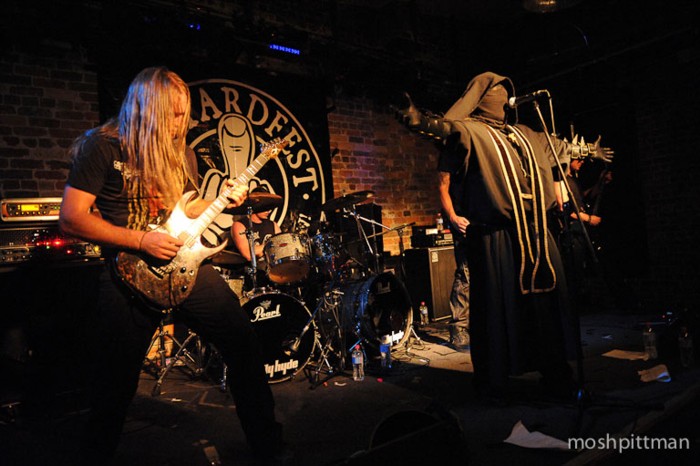 Astriaal: Return of the Dark

Brisbane black metal battalion Astriaal have been silent since making some brief appearances in early 2011. As winter settles over the country, the band returns to the live front with appearances at festivals in Sydney and Brisbane and just-announced shows on the Bastardfest tour. Loud caught up with vocalist Arzarkhel via email recently to find out what Astriaal has in store.

Q: Thanks for taking the time to answer these questions for us, Arzarkhel. It’s been some time since Astriaal has played in Sydney. I believe the last time was February last year, is that correct?
A: Yes, this was for the Armageddon Festival alongside Nazxul, Destruktor and Drowning the Light amongst others. This show was held on one of Sydney’s hottest days and I believe hottest nights on record. The live conditions were thermonuclear but this festival was showcasing black metal from Australia, the land of drought and desert winds. Polar opposites to our European counterparts. Fitting I guess one could say.

Q: That was the replacement show for the Black Mass Festival that was cancelled due to self-interested meddling from do-gooders. Considering what happened in the fallout of that, what are your thoughts about it?
A: It represented a pathetic state of affairs when minority religious splinter groups can simply make an uneducated, feeble and ignorant complaint to a venue or participating body and have a whole event cancelled. All of which without negotiation, communication and the complete disregard for the hard work, many hours and financial input artists/event oragnisers have had to provide and endure to make such a festival possible. I mean what year is it? 2012… and these religious zealots still hold sway over political direction, societal policy making and the smothering of anyone else with differing or opposing ideology. It’s a fucking disgrace and irrelevant in these modern times. We need to separate church and state… the state of mind!

Q: I understand that there has been some changes within Astriaal since then, and the Evil Invaders/Inquisition shows will be the first to feature the new lineup. Can you elaborate on what’s happened and who the new members are?
A: Indeed, as known Dan Marsden [Daeimos] formerly of Psychrist and currently Infinitum had only recently joined the fold taking on bass duties. Since then we have acquired a new rhythm guitarist David Slepcev [Svarogg] since the departure of Helthor in March 2011. Helthor is now involving himself in other potential projects and exploring other musical styles; the departure was amicable and we wish him well on his new path. Svarogg had been known to us for several years and had always been known as a great guitarist, so when the position arose he fit the bill perfectly in all aspects from his playing, musical philosophy and personality. The future with the new lineup and songs currently being written is shaping up to be the strongest in Astriaal’s now long career.

Q: As the first shows back in some time, can the audience expect anything special?
A: Yes these will be our first shows in nearly a year-and-a-half, so yes, besides the new lineup we have embraced this closing moment of the 13th year of Astriaal and will unleash a new level of sonic and visual indulgence. Hearken the next chapter MMXII.

Q: Anatomy of the Infinite was received extremely positively, which mirrors the reaction to all of your releases so far. Looking back at the album now, what are your overall thoughts on it?
A: Looking back we hold mixed feelings for Anatomy… essentially. With this album it was in part the journey that three of its members [Baaruhl, Gryphon and myself] undertook  in its creation. Travelling halfway around the globe to mix our album in Norway with one of the great and eccentric musical minds in avant-garde black metal [Knut Magne Valle – Arcturus/Ulver] in his incredible remote studio with its raging waterfall and picturesque location was a most rewarding and significant moment for us all. But due to time restraints within our travel schedule we only had two days in total to complete the mix for the entire album which put the whole process under intense pressure. Also this meant certain things could not be fixed or fine tuned in the mixing process which we feel in the end let down the album in part… alas it is what it is. Overall we feel the album contains well-written and worthy material that was at times poorly executed in certain parts of the recording and mixing stages of production. But we have learnt form these mistakes and can guarantee the next opus will destroy everything that has come before it… I feel it will be our finest hour, Amen!

Q: How does the new material compare to previous work musically, and in terms of philosophy? Has the philosophy of Astriaal changed significantly?
A: The new direction of material is heading in a much more intense and violent sense of urgency within the chaotic and blasting rhythm sections. The songs still contain moments of more epic expansions but these now serve different roles within the songs compared to previous compositions. Some of the new songs thus far I feel will perhaps become some of our most memorable for our listeners. As far as philosophy, lyrically the Abyss will always play its fundamental role, as will the decomposition of indoctrinated religious philosophy. But I still hope to display a different approach in lyrical concept via more distorted dream state like scenarios, analogies and metaphors… darker dimensions.

Q: Will any of the new songs be featuring in the show?
A: Indeed, we will be showcasing at least three new tracks on these upcoming performances and they will definitely leave their aural scarification.

Q: Astriaal has also been added to the Dead of Winter Festival line-up. Being such a diverse festival, what are your expectations for how you’ll be received there?
A: Over the past few years this festival has had a few more extreme metal bands perform, Portal being one etc, and I think these bands have been well-received. This year will also have Defamer among the ranks so there will be a few bands to entice those people with a more discerning extreme musical ear. Either way it will at least be an opportunity for those listeners familiar with our music to see us perform once more in Brisbane which is a rare event these days and for those not familiar a chance to see and hear something they will either embrace or decline. I have no doubt Astriaal’s live performance will leave an impression, for better or worse

Q: What else can we expect from Astriaal after these performances? Will the rest of Australia get a chance to see you sometime soon?
A: As you would have seen by now we have been announced as one of the main artists to appear on the national Bastardfest festivals touring all capital cities in Australia throughout October and November 2012. We are extremely pleased to be a part of these shows as it will once more get us back to several cities we have not played in years and the opportunity to finally get to perform in Perth, Western Australia which has been 14 years in the making. In the meantime between the Dead of Winter show in July and Bastardfest in October we will be primarily focused on the completion and tracking of the new opus. Only a few more songs are required to be composed and/or reworked to complete the album which will most definitely be our crowning glory, this is our goal and I know it will be achieved.

Q: Astriaal is one of Australia’s veteran metal entities now after 14 years in existence. What changes have you seen and how do things compare now with the time you were first emerging?
A: In essence I don’t think that much has changed as far what it takes to create extreme music with likeminded souls and the composing of original and unique music that a band must endure to stand out from the plethora of artists. But trust me it is not an easy path as Astriaal has had several instances of being on the verge of collapse and disbanding. It is only through perseverance and commitment a higher class of art can be achieved. We collectively felt that we had not said all that needed to be said within Astriaal and to have ended it then would have been premature and a great waste. Over the years we have achieved many great things as a band and individually of course that have rewards beyond their initial moment… a legacy and memories in life one could say. As far as significant changes, the internet and it’s ever growing capacity to make connections and promote one’s art be they with an audience/fans or label/business contacts, etc has been the single most significant outlet bands have had in the last 14 years at least. Even with this outlet only hard work, perseverance and solid commitment to one’s art will determine the success of any bands relevance past, present or future.

Q: What are your thoughts on the current state of black metal now, both here and internationally, and do you think it is in tune with Astriaal?
A: I actually feel it is in a very strong position as the variety and experimental expansion the scene in general is undertaking is very impressive. There are many new and old bands still pushing the boundaries and the cycle of old and new styles is still unleashing some incredible music to imbibe. For instance I still find great pleasure in predicting or waiting to hear where bands like Blut Aus Nord, Deathspell Omega and Abigor will further push their sonic artistic expression. I would currently still hold these three artists as the authentic contenders of unique, avant-gard/experimental black metal. As for Australian black metal it had gone through a lull in the early-to- mid 2000’s but has seen somewhat of a renaissance in the past few years with many old and new bands coming to the fore once more, and it is only on the rise. So yes, I feel the black metal movement will have very strong proclamations in the future. Astriaal is also on this wave of creativity and we are definitely evolving and expanding our musical scope. The new opus will prove this.

Q: Once again, thanks for your time and all the best. Is there anything further you’d like to add?
A: Hails once again Brian for an in-depth interview. For those souls seeking to hear our music or to find our albums and merchandise use these links. Astriaal M MXII – Hearken the next chapter. http://www.reverbnation.com/astriaal  http://www.astriaal.bigcartel.com/

Astriaal will be appearing live at the following upcoming shows: