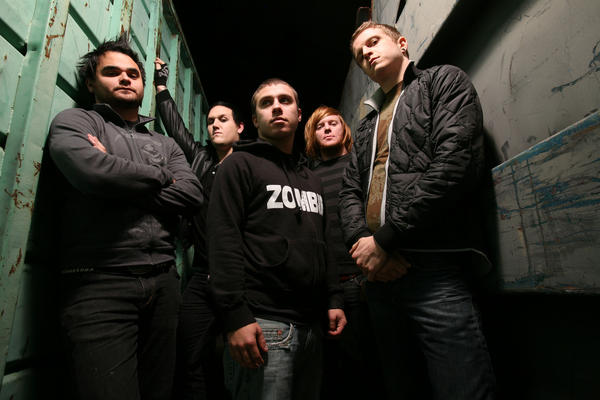 Orange County metalcore megastars Atreyu will be hitting Australian shores once again in December as they play the east coast shows on the No Sleep til Festival. Brian caught up with guitarist Dan Jacobs on a break between golf rounds as the band took a few days off before heading Down Under to talk about their upcoming visit, what makes them tick, and that dreaded “metalcore” tag.


Q: Hey Dan, hope you’re well. You came off the Mayhem Festival a little while ago that had 3 Inches of Blood on it who are touring here with you as well. What was the vibe like for that?
A: It was cool man. We toured with Korn before on the Family Values tour and it was cool to do it again, cause they bring a pretty good crowd. Between them and Rob Zombie and whatnot, it’s a pretty good show to tour.

Q: Congregation of the Damned did pretty well for you out here, so what is the setlist going to look like considering you will only have a fairly limited time this tour?
A: It gets tougher everytime you put out a new record cause you’ve got that many more songs and not that much time you know, so we’ll probably play one or two songs off every record and see how many we can squeeze in there.

Q: Atreyu is often referred to as one of the leaders and originators of modern metalcore. What is your take on that after all these years?
A: Well it’s really weird that [metalcore] was given that name. I mean, it is metal and it is a little bit hardcore. But most metal and hardcore is a little bit of each of the other, you know what I mean? You listen to a lot of hardcore bands and you hear their metal influences and you listen to metal bands and you hear their hardcore influences. Even us… we have a lot of melody but we focus on the hardcore metal side of things. Technically the name doesn’t even fit the mould. Essentially as far as being called metalcore it’s hard to really break it down. I don’t know, I guess it’s just that we were, at the time, there wasn’t really anywhere else that we fit in the metal scene or the hardcore scene.

Q: Atreyu hasn’t necessarily always kept to the strictly ‘metalcore’ sound either have you? It always seems like you try to add other stuff from, say, 80s rock and maybe some punkish stuff into your albums as well.
A: All our influences are all across the board. From listening to hardcore metal bands to listening to even pop bands, rock stuff and a bit of everything. Not wanting to sound like anything in particular and take all our influences and kind of make it work in the one song and that’s where the melody/screaming/aggression thing came into play.

Q: Congregation of the Damned is significantly heavier and more aggressive than Lead Sails Paper Anchor was. What do you think the reason for that was?
A: Well I guess it was partially by looking at the world and all the ridiculous things that are going on right now. Things politically, and things overseas and wars and all that stuff. But there’s also stuff in our personal lives, whether it be a death in the family or people being upset about being away from home… you know even something that you’re watching on TV that day can be the catalyst when you’re sitting there writing some songs and it can make them more aggressive or whatever it may be. Even the name of the record itself, Congregation of the Damned, it’s the world, people, us, everybody… it’s a congregation that’s digging ourselves a hole with all the bullshit we’re doing.

Q: Travelling the world as much as you have been able to do with Atreyu over the years, do you sometimes get frustrated when you meet people who may not have the same kind of worldview that you’ve developed by touring around?
A: Well that’s interesting. When you do travel around a lot you get to experience the way people support their lives or how they do things. In that way it educates you and it does make, at times, you look at people who haven’t been around as much and they seem like uneducated to some extent just because they haven’t had those experiences and you can’t relate to them on that level. They can’t relate to other cultures and stuff on a certain level, it’s a level of ignorance that comes with not being able to go to these places and see how people live their lives and know that they’re not dumb because they don’t speak English.

Q: What are your memories of previous Australian tours and what are you looking forward to this time?
A: The first time we got there, we showed up and our hotel room wasn’t going to be ready for a little while so we went down to Steve Irwin’s animal park and saw the kangaroos and stuff. That was pretty cool. Not being from Australia, that seems like the coolest thing to do is go see the koalas and kangaroos and stuff. That’s pretty awesome. Other than that, the shows… the shows were amazing. Everyone is just so enthusiastic. I guess we don’t come down there as much as people want us to so everyone’s hyped up and ready to go. It’s a good time.

Q: Which other acts on the festival are you hoping to catch up with or see while you’re here?
A: I’m really looking forward to seeing the Descendents. I think that’s probably the number one band I’m looking forward to see, because, you know… they don’t really play very often. So them and Alpine Trio and NoFX are two of my favourite bands ever, so that’ll be pretty awesome. We’re pretty excited. There’s a lot of pretty good bands on this tour.

Q: And when can we expect to see Atreyu back here doing a tour of their own?
A: Hopefully sometime next year we’ll get back down there because this is a fun spot for us to come. It’s more like a vacation for us just to be down there.

Q: What do you think the next album is going to be like?
A: I would say its gonna sound almost like our record A Death-Grip on Yesterday, that sort of ballpark. It’ll still have all the melody and whatnot, and at the same time some more classic Atreyu attributes in there.

Q: And finally, when can Atreyu fans expect to see the new album once it’s done?
A:My guess would be it will probably come out sometime in 2012. Because after this record cycle’s down, we’ll probably just hang out and rest our brains to get ourselves back in the zone to write another record and then get back out there and start touring again.