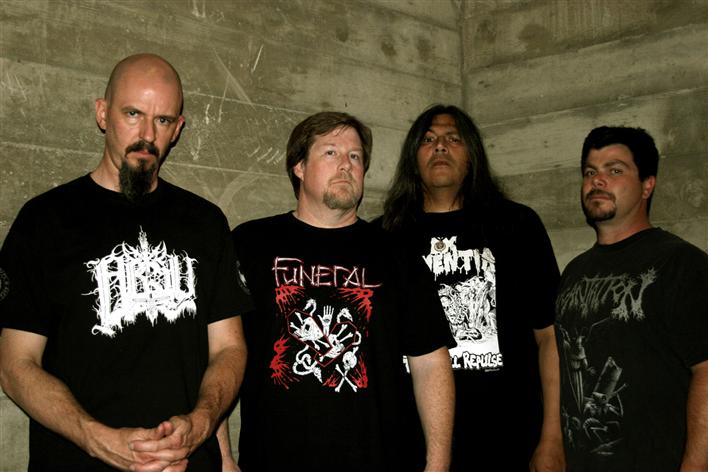 Autopsy was a name synonymous with the underground death metal movement in the late 1980s. By 1995 they were done, with most of the members continuing in Abscess until the middle of last year. That’s when a rejuvenated Autopsy returned and Abscess subsequently retired, although the one didn’t cause the other, as drummer and vocalist Chris Reifert explains.

“Well, Autopsy got back together first, and then Abscess split up, but it wasn’t because of Autopsy getting back together,” he says on the phone from his home in California, a few days before he was due to head to Denmark for the Roskilde Festival. “Our guitar player in Abscess, Clint [Bower], was ready to break away and work on his personal life, which we totally respected, and that caused the band to break up, and left the door open for Autopsy to get going again full time. It all fell into place, I guess.”

Getting back into Autopsy mode was, Reifert says, very easy. After 15 years, it was just the right time for it to happen and the transition has been natural.

“That’s why the band broke up to begin with, Reifert says. “We just didn’t want to do it anymore. Time went by, and we figured we might actually enjoy this, so you know, it took that long to get to that point, but here we are.”

Following on from last year’s EP release “The Tomb Within”, Macabre Eternal marks Autopsy’s first full length recording since 95’s Shitfun, which wasn’t exactly a hit with fans. Macabre Eternal has been generally well received however, except with regards to the actual sound.

“The biggest criticism we get is from people who wished we’d imitated Mental Funeral or something instead,” Reifert says with a laugh. “They’re like, ‘Oh no, it sounds too good’. I kinda knew that was coming, because we set out to get a good sound in the studio, not too good, so it sounds artificial or anything like that, but a good decent sound where you can hear everything that’s going on. I did get a feeling that some people would complain because it doesn’t sound like Severed Survival, or whatever, but fuck it man. We just wanted it to sound good, so there you go.”

Reifert makes no apologies for the cleaner sound of the album compared to that of their early albums. Deliberately trying to sound like they did twenty years ago wasn’t something Autopsy was keen to do. Instead, the focus was on what they would sound like now.

“We’ll just do what’s on our minds right now as long as it sounds like Autopsy, which is the main criteria,” says Reifert. “As long as we sound like ourselves, which we always do because we can’t help it, there’s nothing to worry about.”

Macabre Eternal might have a modern, cleaner sound than Autopsy albums from the past, but their work ethic in the studio hasn’t changed. With all the songs written and ready to go, they were in and out in a week.

“Like usual we’re always on a tight time budget: we only had seven days to record the album, which for us is a pretty good amount of time,” the drummer says. “I know some bands go in for months or weeks or whatever they do and fucking record just drums for two weeks or whatever, man. We just go in there and fucking play and record it, so we gotta go in there with a plan pretty meticulously constructed. There’s not much room to make things up as we go.”

Autopsy songs are known not just for the rawness and brutality of their delivery, but by their speed and overall brevity. Macabre Eternal‘s blood-drenched playlist is surmounted by the multi-faceted “Sadistic Gratification”, an evil masterpiece eleven minutes in duration. That’s an epic for any band. In Autopsy’s case, it’s twice as long as another other song they’ve done, and about ten times longer than most of those on Acts of the Unspeakable.

“We’ve got a lot of reactions to that,” Reifert admits, perhaps a little unnecessarily. “We never really thought it was an issue, how long it was. We didn’t even know how long it was until we recorded it. Eric (Cutler – guitar), who wrote that song, said ‘I got a song that’s kinda long, it might be like six minutes or something’. So we played it, and we had no idea it was that long until we were done.”

For his part, Reifert reckons that not knowing how long the track was helped him to nail it.

“What I’m telling everyone, and it’s the actual truth, is that I’m glad I didn’t know before we recorded it ’cause I would have been completely thinking about that the whole time!” he says, laughing, which he does a lot. “Sitting there playing drums, thinking Well I’ve got six minutes to go! I can completely fuck up so… many… times! But it went really smooth. I think we got that down in, like, two takes!”

The final two minutes of “Sadistic Gratification” feature the realistic cries of torment of a woman being horribly tortured, a gruesome and authentic touch that some reviewers have found genuinely disturbing. Others band would have waded through hours of underground and possibly even illicit films to find a sample like that, but not Autopsy.

“That’s actually not a sample,” Reifert explains. “That was a friend of ours who was in the studio with us. That was done live on the spot. We’ve kind of had questions like, ‘Oh man, what horror movie did that come from?’ But it was a friend of ours. She just did a really good job. I don’t know where it came from.”

“It was fun watching her do it!” he adds with a chuckle.

Death metal has changed a great deal since Reifert played on Death’s ground-breaking and genre-establishing Scream Bloody Gore immediately before the formation of Autopsy in 1987. As one of the people who can be certifiably considered as one of the founding fathers of the movement, Chris Reifert must have some thoughts on where death metal is today.

“It is what it is. The spirit of the thing is the same, it always has been. It’s just the way people feel when they listen to a band they like. That’s something that’ll never change,” he says. “The biggest difference now is that it’s more known about, because enough time has gone by and people have finally got hip to it. Of course, it was extremely underground, when death metal first came around. Like anything else, over time more people know about it. And now people have had kids that have grown up being into it, and that’s gotta add to the sheer numbers right there. We got a whole other generation of kids that are freaking out over this stuff.”

He goes on to suggest that in terms of adding new twists to the genre, there doesn’t seem to be very room left, although it’s far from dead and buried.

“Kinda everything’s been done now. But at the same time, there’s endless ways to tweak the formula just enough, or find different riffs or whatever, to always keep it interesting. As long as people put effort into song writing and stuff, it’ll always be interesting.”

In the beginning personal computers were rare even in schools. Now there’s few people who don’t have one, hooked up to the greatest cloud of information ever developed in history. The technology so readily available at this time has made it incredibly easy to get music to the masses, but it can also be a struggle for those who really want to achieve and carve out a career.

“‘Now there’s the Internet, which is not a new thing, but things happen very rapidly,” Chris says. “You can form a band, record a demo and have it on the Internet in one afternoon. Which is kinda cool for us impatient folks. But it makes it more of a challenge I would say, for bands to stand out too. Because there’s just so much going on, twenty four hours a day, seven days a week, always something happening. So you gotta really be on your game, unless you don’t mind getting lost in all that stuff.”

As for Autopsy, Reifert says that they won’t be going away again soon. In the week we spoke they had played their first shows in San Francisco in sixteen years and were gearing up for an appearance at the prestigious Roskilde Festival with other gigs after that. They’re also working on songs for another album.

“We’re gonna keep rockin’,” he says. “There’s no expiration date on the band. We’re enjoying what we do, so we didn’t have like a goal to do an album and some shows and break up again. We’re still going at it. As far as topping [Macabre Eternal], or where do we go from there… I’ll let you know when we get there, because I have no idea. It’ll be more of the same, I’m sure. Because that’s all we know how to do. We never figured out anything else to do with our lives. So (ha!) that’s what we do! It’ll be more death metal, basically.”

And are we ever likely to see the death metal pioneers here in Australia?

“Oh that would be awesome man!” Reifert says. “It’s something that we’ve definitely talked about wanting to do. We got a fresh new year coming up next year, so let’s see if we can make that happen!”