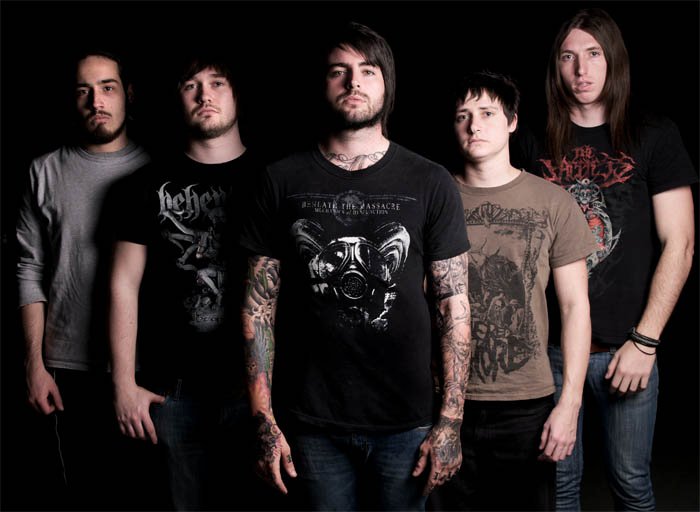 Aversions Crown: Dare to be Different

Eight-string guitar-favouring Brisbane deathcore bruisers Aversions Crown aim to craft a more technical slant on what has been a much-criticised genre. Having released their debut album Servitude last year, the band is seeking to build on their momentum with appearances at several of this year’s Bastardfest shows. Loud spoke to guitarist Chris Cougan about the band’s history, influences, being “a square peg in a round hole” on the Bastardfest tour, what sets them apart from the bloated ‘core pack and more.

Q: For those of our readers who aren’t familiar with your music, can you tell us a little about the band’s history?
A: Aversions Crown started back in late 2009 with bands such as Beneath the Massacre, Whitechapel and The Red Shore being its main influences. These influences are what moulded the band and created the sound of our debut album Servitude.

Q: Aversions Crown seems to have focused on a more technical take on deathcore. Has this always been a conscious effort on the band’s part?
A: There are a lot of deathcore bands getting around today, especially in Australia. When developing our sound, we endeavoured to create something that would stand out a bit, as at the time there weren’t many bands incorporating the technical aspect of death metal. We did our best to try and create a technical, yet still ‘heavy’ sound.

Q: Interesting. A lot of bands within the modern death metal/deathcore scene seem more interested in outdoing each other from a heaviness standpoint, rather than focusing on actually writing memorable songs. Is this something you’ve noticed as well and if so, does it motivate you further to try and stand out from the pack?
A: A lot of bands these days are buying seven and eight-string guitars, tuning them down into ridiculous tunings and playing generic breakdowns. This is something we definitely want to steer clear of. Our new album is more so focused around writing music, as opposed to a particular sound or feel. I think more bands need to focus on finding the happy medium between the musical side and the heavy side in the ‘deathcore’ scene. We want to write memorable music that we would personally enjoy listening to. Hopefully we can convey this in our new material, and convey that we are evolving as not only musicians, but as a band.

Q: Good to hear. Our reviewer also praised the band for going the extra mile with the packaging and presentation of Servitude. Even considering the current state of the music industry, do you feel it’s still vital to present your music in such a fashion?
A: Although it’s obvious that the majority of people will download our music, we still felt obliged to go the extra mile with Servitude. I don’t think it’s worth half doing anything, and it’s reassuring to see so many of our fans actually purchasing the physical copies. I think that if people are going to purchase your music and support your band they deserve a quality product. Piracy and the increasing decline of physical sales is not a valid reason to produce a second rate product.

Q: What are your views on downloading (both legal and illegal) and the future of the music industry? Are record labels rapidly becoming obsolete?
A: As a band, we wouldn’t be in our current position if it wasn’t for the Internet and people downloading our music. To anyone that has downloaded, streamed or purchased our music, thank you. Unfortunately, bands and labels are also going to continue to suffer as long as the Internet is around. All we can ask is that if you download a band’s music and enjoy it, try to give something back. Go see them when they play near you or buy their merch.

Q: Indeed. The band is performing at a number of the upcoming Bastardfest shows. What can punters expect from your live performances?
A: We will be delivering an energetic live show. When we are on-stage we all try our hardest to get everyone into it, and to have a good time. Don’t be scared stand up the front, bang your head and scream the words at us. We are really looking forward to warming up the stage for Psycroptic.

Q: What unique elements do you feel Aversions Crown can bring to the table at Bastardfest?
A: We are one of the few ‘deathcore’ bands on the bill at a lot of the Bastardfest shows. We try to remain heavy, yet have a lot of melodic/eerie effects to keep the songs interesting and create a mood. Hopefully this is something people want to hear. We are kind of a square peg in a round hole on the Bastardfest tour so hopefully people like what they see.

Q: Outside of those shows, what other touring plans does the band have in the pipeline?
A: Aside from Bastardfest and a few shows in the works for December, we will be taking some time off to work on our next release. We have big things in store for this next album, and it is going to be our main focus for the next six months. We are hoping to play a new song on the Bastardfest tour and can’t wait to see how the audience takes to it.

Q: On a more personal note, what have been some of your favourite releases of 2012 thus far?
A: Make Them Suffer’s album Neverbloom was amazing. I’ve also had the chance to listen to new Thy Art is Murder and I think it’s safe to say that it’s going to be one of Australia’s best metal release in a long time, it blew me away.