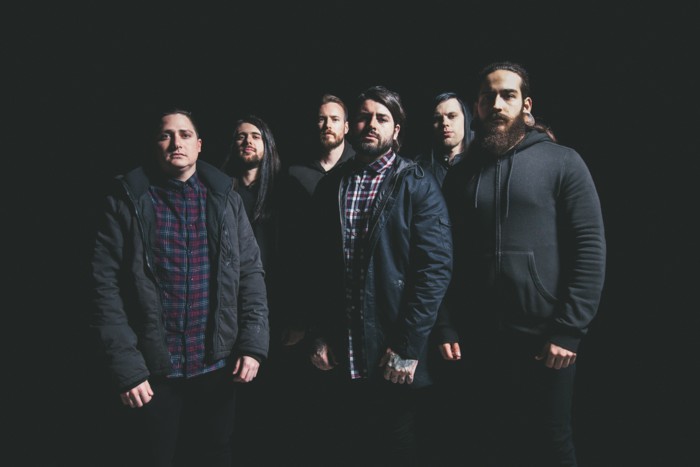 Aversions Crown: From Enslavement to Obliteration

Queenslanders Aversions Crown are the latest Australian band to be snapped up by German metal mega-label Nuclear Blast. The band has been drip-feeding tracks from their new album Tyrant via YouTube recently and are about to hit the road next month with Molotov Solution. We caught up with vocalist Colin Jeffs are discovered that the down-tuned heavy-hitters are a bunch of SF geeks, among other things.

I’m sure you’d agree that 2014 has been a huge year for Aversions Crown. When and how did the deal with Nuclear Blast come about?
We didn’t find about out it until just before it happened. Our manager didn’t let us know about it until it was 100% set in stone and we were going to release the album on Nuclear Blast. We were hoping for quite a long time – when we were on tour in Europe earlier this year, we actually went to the Nuclear Blast office in Europe and met some of the guys there and that put the idea in our heads. How amazing would it be for Nuclear Blast to release our album? So we were trying to be on our best behaviour. Maybe then they’d already heard us. We were tour with Thy Art is Murder, a band they already have, and they saw us play a couple of shows. Maybe that had something to do with it. But we didn’t find out until a couple of months before the announcement happened. It was a kind of surreal thing to happen.

How’s reaction been to the album so far?
The album hasn’t been released yet, but to the singles that have come out so far, the reaction has been pretty much 100% positive. I don’t think that I’ve read anything bad, and even if it was it wasn’t that it was terrible, just that someone wasn’t into it. We’re blown away by the response that we’ve been getting. We dropped the video for ‘Vectors’ over night and there’s been 10,000 views already. Everyone’s been talking about it and it’s all been positive from my angle.

What has the progression been like in the band since the first album?
We were just a new band when we wrote Servitude, so we wanted to write something fast and heavy and we wanted to make it about aliens and human enslavement. We didn’t put a lot of thought into it, though. We were just five guys and we threw everything together and that’s how it came out. We really didn’t have much of a planning process. With this album, we’ve put a lot more thought into how the songs go, how they sound, a lot more thought lyrically into the ideas and the themes. We’ve reverted back to a more traditional song structure, with more of a verse-chorus type structure than what we had on Servitude, which was just more of a free-for-all. We’ve really concentrated on making songs, songs that people are going to want to listen to, songs that are endemic and get stuck in your head – catchy riffs, catchy grooves, interesting lyrics and themes. We’ve put a lot more planning into this one than what we did with the first album. Hopefully it works out in our favour.

What’s the lyrical direction this time? Does it carry on from the previous one or is it something completely different?
Servitude was an album that was based on many different concepts about extra-terrestrial life. Some of it was a little disjointed. It didn’t really gel with a theme. Each song was about one thing. But when I was doing the lyrics for Tyrant I had a solid vision in my head of what the world would look like if this particular instance was to occur. I build concepts around a singular vision. This album was more of a journey for me, I suppose, exploring my visions of the end of the world. Each song is like a different phase of the whole concept. One song might talk about mind control, one song might talk about the inter-dimensional gateway, one might talk about how the government might be involved… it’s a story.

Is that something that you’ve always been interested in?
The lyrics for the band are built on a science fiction theme, and it’s built on a theme that used to terrify me when I was growing up. Still to this day it’s a terrifying thing. The concept of alien life is still very interesting to me, and to the rest of the band. That’s why we came together. Tyrant uses this alien invasion, alien enslavement theme – if you look a little deeper it’s not that different to some of the things that are actually happening in the world today, but we become numb to those things because they become completely normal. It’s not that it has a double meaning or anything like that, but I think if you look a little deeper in the lyrics you’ll find something that wasn’t there on the surface when you first glanced.

Was that intentional, or did it just turn out that way?
At first it wasn’t intentional, but as I kept writing about humans being enslaved and people being killed and people trying to take over the world and raiding I just thought, You know what? A lot of these things are happening right now! All over the world, a lot of these things are happening: invasions, wars, population control. These are things that are actually happening on Earth, and I’m singing about them like it’s happening on another world. It wasn’t an intentional metaphor.

What’s on the agenda for Aversions Crown now. There’s a touring coming up. Are you then heading back overseas?
Yeah, there’s a tour that starts November 5 with Molotov Solution. We’re playing a bunch off the new album on that, and then early next year we’re going back to Europe to smash out a month long tour but there’ll be more information about that released shortly. After that, we’ll just take it as it