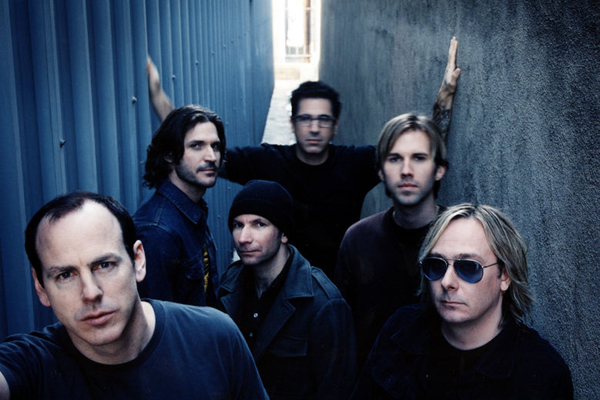 In the thirty years since Bad Religion came blasting out of LA with a rough-hewn self-titled EP, bassist Jay Bentley has seen a lot of things change, from political leaders to fashions, to audiences and even punk rock itself. But one thing that’s remained more or less the same for him, even with the occasional change in personnel, is the nature of Bad Religion itself.

“The thing is,” he says, with a friendly warmth as if we’ve known each other for twenty years instead of about two minutes, “we don’t really change. Because we really like what we do. And we’re not really looking for What’s the next thing? Who cares? We just do what we do because we really have fun doing it. It’s like playing Australian Rules football. You don’t show up with a baseball bat and say, ‘I’m here to play!’ You just play. You just put some tape on your ears and you go!”

While the easy-going musician may be slightly confused about Australian codes of football, he is unsurprisingly rather more confident when it comes to more socio-political subjects. As the US gears up for yet another inexorable, seemingly endless Presidential campaign, Bentley pinpoints what he sees as one of the problems of his society.

“My feeling is that the biggest marketing tool now is fear,” he says. “All of the politicians campaign on, ‘If you don’t vote for me, your worst nightmare will come true’. While I can stop and laugh and go, What a dickhead!, that’s not necessarily true for a lot of people. A lot of people go, ‘Oh my God, I don’t want that! I’m afraid to have that happen!’ And so, you’re creating this hysteria that leads society into this feeding frenzy of, ‘We can’t have gay people being married!’, and ‘We can’t have women in the military!’ ‘We can’t have corporations giving women birth control’. Are you serious? Why do you care? But apparently they care, because they got nothing else to care about.”

What Bad Religion cares about, he says with a laugh, is making people like that stop. Things being as they are, he knows the band won’t be out of a job for a long time to come.

“We have an endless supply of lyrical ideas just waking up in the morning,” the 47-year old says wryly. “Every day. We’re not going anywhere.”

Three decades after the release of their genre-defining How Could Hell Be Any Worse? album, issued on guitarist Brett Gurewitz’s own label – the now legendary Epitaph Records – and Bad Religion is still getting angry at the same things that pissed them off back then.

“Even more so,” says Bentley. “Because I think back then, the big wave of information was coming through television, which is a sort of one-sided… you can take it or leave it, or turn it off, but this is where you get all of your information from. With the advent the Internet you now get this two-sided argument and you watch everything happening… is the world crazy? Everybody’s lost their mind.”

While the subject matter hasn’t changed much, Bentley concedes that the way the band approaches it may have: “You try to be a little more eloquent. You try not to use words like, The First Lady is a fuckin’ lez!” He laughs. “That’s a fifteen year old’s lyrics! So hopefully we’ve grown out of that a bit.”

Bad Religion’s popularity reached fever pitch during the mid-90s when, due to the rise in popularity of alternative rock, 1993’s Recipe For Hate was picked up by Atlantic after the band’s 14 years in the underground. The next album Stranger Than Fiction and its reworked version of the crowd-pleasing “21st Century (Digital Boy)” became hits, and predictably the band almost fell apart when Gurewitz departed.

“[Punk] became mainstream. From alternative music to mainstream. That’s the biggest change that none of us could’ve expected,” Bentley says. “This actually became a viable artform. Really? In my mind, I still remember thinking back then, if The Clash were popular, more people would maybe be smarter.” He laughs. “More smarterer.”

The enormous wave of alternative rock’s popularity subsided, but Bad Religion remained. Gurewitz returned, partnering his replacement Brian Baker and the long-serving Greg Hetson in a three-way guitar attack, and Brooks Wackerman linked up on drums in 2001. The dynamic shift in popular focus away from punk rock and guitar music in general has seen Bad Religion and many others return to the underground level they once enjoyed, and Jay Bentley sees this as a good thing.

“When alternative is the mainstream, what’s left?” he says. “When people don’t wanna fall into that category [they] better dive underground and spread their message grass roots… spreading flyers and playing shows. The cool thing is, it’s sort of back to, bands don’t wanna sound like each other anymore. They wanna be totally unique and irrelevant and… irreverant to the idea of what punk rock is. I’d rather go watch someone unique smash a typewriter on stage than go watch another band that sounds like that hit Top 40 punk rock band.”

Australia has seen Bad Religion many times since “21st Century (Digital Boy)” made Triple J’s Hottest 100 back in 1994, and now they’re back to play the main stage at Soundwave.

“We love it there,” Jay says. “It’s the place that, I think, for a long time, was so hard to get to. It’s so hard to get to, and you finally get down there and you go, ‘Wow, I love this place’. The last tour we did down there with NOFX was, for me, it was just off the hook!”

A killer, high energy set from the band is “a guarantee” according to Bentley, but with thirty years’ worth of material to choose from, “We just gotta figure out what era of high energy we’re gonna bring!”

“In a festival setting,” he continues,  “You’re thinking, Well… what can I, what can we do to make fans of other bands go, ‘I know this band! I know this song!’ or something where they can maybe relate to a little bit of something? At the same time, people who have seen your band before, you don’t want them to go, ‘Oh my God, they’re playing this song again’. What I try to do is think like, if I went and saw a band that I really liked, I’d wanna hear a couple of really cool old songs that I remember and chances are… What I like to do on stage is play songs that are really challenging, because that’s what keeps it fun. Because, you know, I still mess up on stage. I think, well, here comes that part that I always mess up. And then I mess it up, and I laugh and go, well, that was fun.”

No matter how hardcore their message – or their music – might be, Bad Religion has always maintained that ethic for fun, regardless of how serious the subject. It is perhaps partly why the band has remained perennially popular among the ranks of punk bands throughout their career.

“I remember Greg (Graffin) and Brett and I had this conversation one time about… we write these songs and we’re serious about that and yeah, we’re pissed off, but you can’t walk around all frowny-faced pissed off all the time, because then you’re That Guy, and no one wants to be your friend,” Bentley explains. “You’re just a dick. So you better get some sarcasm going pretty quick, and get a sense of humour.”

Soundwave will not only allow Bad Religion to ply their wares in front of a huge festival crowd, some of whom may have well not heard their message before, but there’s always the opportunity for the band to catch up to old friends or make new ones. Having been famously disappointed by the attitude of childhood idol Todd Rundgren when he was hired to work on 2000’s The New America, however, Bentley is now cautious about meeting his heroes.

“I’ve had this feeling for a long time that you should never meet your idols, because when you do, you’re bummed out and you can’t really like them anymore. God forbid they’re in a band and you used to like that band a lot and now you can’t like that band anymore. I’ve had a lot of it, and I’ve learned hey, I like their music way too much, I’m not gonna go meet that guy.”

Nevertheless, he’s not going to let that stop him enjoying himself. It’s not as if he’s going to lock himself away in his room so he doesn’t accidentally bump into any celebrities or anything.

“Oh no, I’m just gonna walk around like I’m not supposed to be there. Pay no attention to me!”

You can also catch them with Strung Out , Street Dogs and The Menzingers on the following dates-
27/2: The Palace, Melbourne VIC
29/2: HiFi Bar, Sydney NSW