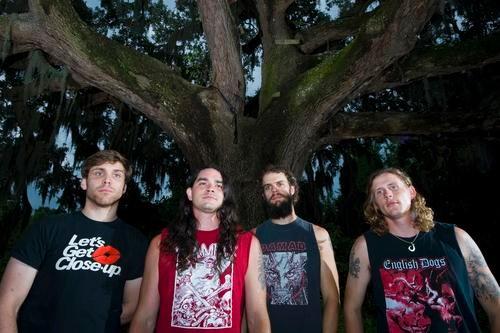 Baroness: The Red and the Blue

Home > Features > Baroness: The Red and the Blue

“It was an awesome contrast for us to go from these arenas where we’re totally green at that type of thing, and then finally do a proper club show in Brisbane was great for us. It was about 300 people, something like that, and we got to play our full set for the first time in front of an Australian audience which is really important for a band like us. When we have the time restrictions we have to cut a lot of what we’re good at out of the set. This show itself was really fun… Lars and James from Metallica came out and saw it and we had a great Australian band open for us, Akaname… it’s a really fun tour that we’re on right now.”

John Baizley of Baroness is at home in Georgia between legs of his band’s Down Under tour with Metallica. Used to small intimate shows that allow them to delve into their music to its fullest extent, both their visits to Australia in 2010 have required them to compromise for the sake of brevity. But Baizley isn’t complaining. In February, Baroness was here as part of the country’s fastest-growing rock festival, Soundwave, and this month they’re opening for the biggest metal band ever.

“It’s awesome for us,” he says. “We’ve had a blast with all of our Australian experiences. It’s been a bit weird for us, because the way we develop things in the States and in Europe, we started off playing in small clubs and bars and things and built things up over the course of time. But we’ve hit the ground running in 2010 in Australia. Our first show was in Brisbane at the Soundwave Festival. The first tour we ever did in Australia was already pretty massive. And now these Metallica tours we’re doing are, I imagine, about as big as it gets for a band like us.”

Hand-picked by Metallica to accompany them on this tour (a decision made a little easier by having the same management), Baizley was humbled and honoured that the metal superstars took the time to familiarise themselves with his band’s music before they met.

“When we showed up in Auckland to do the first show with them,” the guitarist recalls, “each member of Metallica came up individually and introduced themselves to us and spoke to us about our music in a way that only someone who’s actually heard the songs could speak about it. Making definite reference points to individual songs and so forth… which is kind of a dream come true for a guy like me who grew up listening to Metallica. That was the first metal band that I liked. Period. To have those guys understand and like the music… it’s humbling.”

He also can’t say enough about how well they’ve been looked after. And he casually and frankly dispels the idea that Metallica might be distant and aloof or in anyway contemptuous towards their junior touring partners. Having the opportunity to work closely with them on the road, Baizley has been able to experience first hand the deep knowledge of and passion for music at all levels that Metallica still has.

“We almost don’t get treated as well as they’re treating us, and we’ve been on tour with some incredibly accommodating bands,” he says with a laugh. “They are very, very cool guys with whom I have had the pleasure to have some very geniune discussions about any number of topics. But you know, the interesting thing is those guys still listen to a lot of music. And they still listen to a lot of underground music, and they’re still guys you can have a relevant conversation with about good underground music. It’s surprising in a very nice way to meet guys that genuinely care about the music that they make, and the music that other people make. They have a real vested interest in their fans. It’s awesome to see that, because I don’t think they HAVE to. It’s just the way they are.”

There are doubtless probably plenty of people who would argue with John’s assessment of Metallica’s attitude toward their fans given that infamous period of the late 90s when everyone seemed to have it in for them for the way they completely mishandled the music downloading issue. But there’s one thing that can’t be argued with – Metallica’s fans are crazy loyal and parochial. Opening for them is a difficult task.

“I’d be lying if I said it was easy,” Baizley admits. “Their fans aren’t known for coming out early to see the support, or the opening band. And we’re certainly not playing to the full capacity of these arenas. So I’ll say two things: 1) there are a considerable amount of people who are coming out to these shows who are familiar with our music, and whether that’s as a result of Soundwave, I don’t know. There’s a very small contingent of a fanbase that comes to these shows. And furthermore, I think just judging by crowd response at the end of our set on a good night, there’s some very heartfelt applause coming from the audience. Again, that’s something that their audience doesn’t need to do for us. It seems they’re able to make that leap from big Metallica fans, and potentially Lamb of God fans, to becoming nascent Baroness fans.”

Baroness’ music is the kind that is more suited to smaller rooms and longer — way longer — sets. Still, they’re a band that’s up the challenge and they’ve also committed themselves to giving those fans who do show up every night to a different set each time, just like the headliners.

“I was informed that Metallica was going to be doing 80-85% different set every night, along with a couple songs they just need to play every night. And we decided to do more or less the same thing. We’re opening the set with the same song every night, but then going in different directions. I think it’s important for the people who come to three shows, they don’t want to see us bang out the same songs three nights in a row.”

After this tour, Baroness is taking a year off touring to complete their next album. John predicts it should surface in early 2012, or even late 2011. He already has about 16 hours’ worth of ideas that he’s been compiling since he finished working on Blue Record last year.

“I’ve been demoing little ideas and songs since we left the studio after the last record. I’ve got three or four hours of ideas down so far, and another twelve or so I haven’t written down. So it’s just a matter of getting into a rehearsal space and jamming out ideas and seeing what comes naturally with the work that’s already been done. I can’t make any allusions to what the content’s going to be like. That will become clear once we start putting the songs together as a full band. But there’s gonna be a few things that we promised ourselves we are going to continue to do what we need to do to move forward musically. And we’re going to continue to keep an open mind when we’re writing music and not exclude any ideas. If it’s gotta be loud and fast, it’s gotta be loud and fast. If it’s slow and quiet, so be it.”

And then, hopefully, they’ll be able to return to Australia as headliners and give their growing fanbase a full 90 minute set of Baroness awesomeness.

“Well that’s the point innit?” says Baizley. “The whole reason for being in Baroness is to tour. I put a lot of weight on our full set. On the hour and a half versus the half-hour we get with other bands. With any luck by 2012, late 2011 there’ll be another record and some definite headlining shows over there. Our whole Australian experience has been amazing.”