The Beautiful Monument: Reaping The Rewards

Their new album isn’t out yet, but 2019 has already been a whirlwind for Melbourne rockers The Beautiful Monument. Their first headlining tour sold out every date, and they even surprised themselves with the reaction afforded them at the Download Festival. Surrounded by heavier bands of more well-known stature, they still had a big and appreciative crowd of their own, even when going up against Polaris on the main stage.

“I heard that people left their set to see us,” chirps vocalist Lizi Blanco with an excited tone, “and firstly, my heart broke because I would have left my own set to see those boys. But it was gnarly – Polaris! They’re amazing! For people to leave that incredible act to see us… man, we must be doing something ok.”

The Beautiful Monument has been building towards something more than OK for quite some time now. Two years on from the release of their debut album, appearances at the Unify Gathering and tours with bands like Tonight Alive, they are at last preparing for the release of I’m the Reaper, about to be issued globally on June 28. After sitting on it for “about a year”, Blanco is relieved she will finally be able to play the new material.

“Honestly, I just want to get these new fucking songs out and play new music and see people’s reaction to it,” the singer says. “I’m sick of playing old stuff. I’m not gonna lie.”

There’s an animated confidence in Blanco’s voice that doesn’t waver throughout the conversation. It’s the natural determined self-assurance of a good rock frontperson. She carries it even as she talks about laying herself bare in the lyrics to her band’s songs.

“My main focus was the lyrics, so I was like, ‘Are people going to judge me for this?’ It’s a very vulnerable position to put myself in, I guess. I’m pretty much putting my diary out there for the world to listen to. So it’s like, ‘Ah shit, are people going to judge me for this or that or anything I’ve done in my past?’, but, fuck it, you only live once and I’m sure other people go through that shit too, so it’ll be ok.”

Her role as vocalist and founding member keeps Lizi Blanco front and centre in everyone’s sights as The Beautiful Monument’s status continues to bloom. Despite her breezy confidence, Blanco is sensible and self-effacing enough to realise that there’s more to the band than herself. The Beautiful Monument, she says, wouldn’t be what it is without the whole group.

“It gets rough sometimes,” she says about being the focus. “It definitely feels to me personally that the other members of the band aren’t being valued because they’re not singing. I adore when people reach out to the other members and ask them questions, or they get interviews. It shows that everyone is being paid attention to.”

“We are The Beautiful Monument as a collective,” she says assertively, “it’s not just the vocalist. Don’t get me wrong, I get that the vocalist is usually the most prominent member, it’s the one you are really hearing and probably listening to most of the time, but there’s not just a vocalist in the band. There are other members.”

Together, The Beautiful Monument are heading out on the road again in August to support I’m the Reaper. Blanco laughs that they’re leaving it until then so that fans can learn the songs and decide if they still want to go see them. Judging by the following they’ve already amassed however, it’s unlikely there will be no one there when they hit the stage.

“I actually don’t think any of us were expecting the crowd we got at Download,” Blanco recalls. “It was a really positive surprise. We are our biggest critics, so we always assume the worst. It was just insane, how many people were at the Ascension Stage watching us play. It was definitely not expected, but it was fucking awesome! If I could go back in time and do Download again, that would be what I’m looking forward to most!” 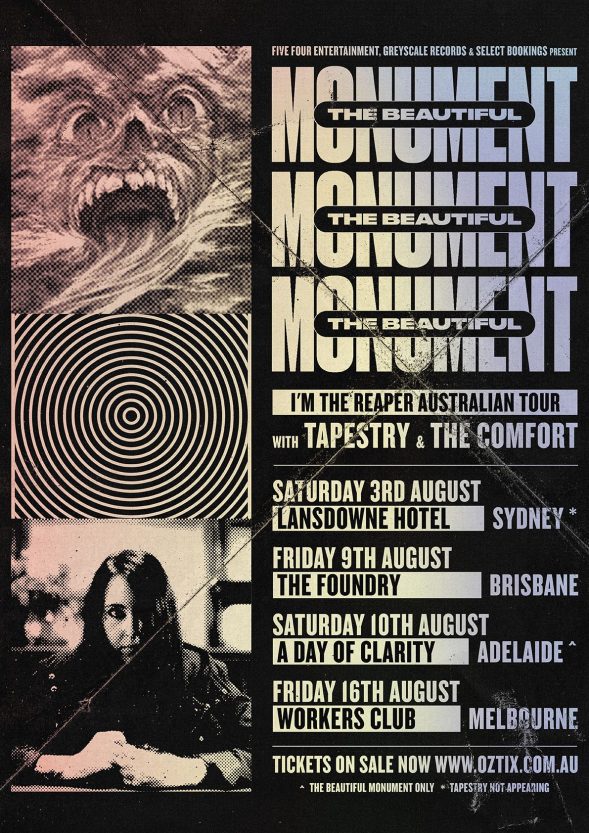