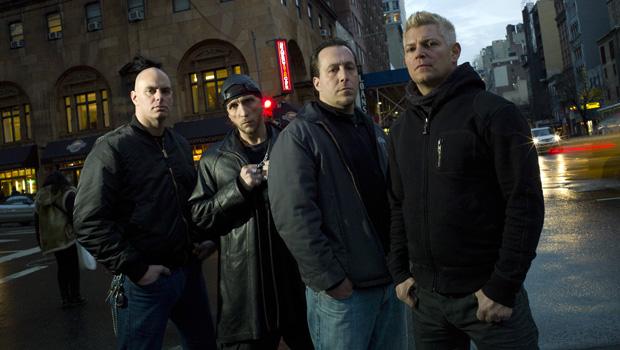 New York hardcore metallers Biohazard are back with their ninth studio album Reborn in Defiance,  the last to feature bassist/ vocalist Evan Seinfeld. This month, now armed with Scott Roberts once again, they will return to Australia to take part in the upcoming Soundwave Festival, as well as Sidewaves with Cro-Mags and Hatebreed. Loud caught up with founding guitarist/vocalist Billy Graziadei recently to talk about the new album, Soundwave and much more.

Q: Hi Billy. How’s everything been going?
A: Everything’s been great bro! Psyched to be here on tour and having more time for working on new music also.

Q: The new album Reborn in Defiance was released a few weeks back. After so many years of recording and releasing albums, does it ever get easier to deal with the anxiety and excitement that surrounds those last days before releasing something new?
A: Life is hard enough; you don’t need to torture yourself when life does it for you. I handle things as they come my way, keep things in perspective and move on. I’m psyched for the release but my focus has been on working some new tunes, rehearsal for the tour and now that we’re on the road… I’m in full tour mode and lovin’ it!

Q: Before heading into the studio to lay this one down, did you do a lot of pre-production?
A: We were in the middle of touring while we were writing so the live energy was always flowing through our veins. We’d be in the studio writing for a few weeks then go back out on tour, try out some new songs, then come back into the studio to write some more. I think that had a *huge* part in how Reborn in Defiance turned out.

Q: What do you hope the fans will take away from the new album?
A: I wonder if people will get from it what I get from Reborn in Defiance. I think it’s a great cross section of everything I love about Biohazard. I hope people like it but for me, we wouldn’t have let it come out if we weren’t proud of it.

Q: Let’s go over a couple of the tracks on the new album… ‘Waste Away’, ‘Skullcrusher’, and ‘Come Alive’ — where did you draw your inspiration from when it came time to write for this album?
A: I never liked “telling” people what our songs are about. That’s the cool thing about what artists create, it’s all up for interpretation. Take what you want from our music, lyrics, songs… it’s yours as much as it is ours.

Q: Billy, you will be back in Australia shortly for the Soundwave Festivals but I wanted to know what fond memories do you have from your last Australian visit back in 2008 when you toured with Korn, Bloodsimple and Throwdown.
A: I remember taking the guys in Bloodsimple on a surf/scuba trip and we almost missed the show that night. That was an incredible time for sure. We partied a lot. There’s never a shortage of people wanting to have a good time in Australia! I love it there.

Q: Besides the upcoming festival appearances you will also be doing a couple of sideshows with Hatebreed and Cro-mags. Do you have any plans to film any of the Aussie performances for a possible future live release?
A: We film when we have a camera; since most of the camera’s we’ve taken on tour have either been lost or stolen…. maybe I’ll throw one of those new portable GoPro cameras on my guitar. That would rock.

Q: You have played your fair share of large festivals over the years. Are you a fan of doing these types of shows or do you prefer the smaller more in your face, intimate club shows?
A: Life is filled with pros and cons to everything. Festival audiences have a huge amount of energy that’s insane. Club shows have something awesome about them that is more personal in a lot of ways. I dig both club shows and festival shows.

Q: There’s no doubt that you have some very dedicated fans and your live crowds go insane. What’s some of the craziest things you’ve seen talking place in the crowd whilst performing?
A: Ask around about the shit story from our tour with Slayer in Australia. Too long to go into it here… that had to be the craziest.

Q: [Laughs] I actually do remember that story well. Whether it’s getting nude, jumping on stage, or lighting yourself on fire, after all these years does it still amaze you to see the lengths some fans will go to, to get your attention whilst performing?
A: They all rock but the Australian shit story tops them all!

Q: What’s the strangest thing you guys have ever been asked to sign?
A: [Laughs] I think it was my fork that a fan took from my table when I was done eating. It was in Brazil. We were so fucking surprised that we hung out with him for a while. He came to see us on the last Brazilian tour and we all laughed our guts off over it.

Q: [Laughs] That’s pretty insane man! Having seen you live I know how amazing and energetic your live show is. These days do you do anything specific to warm up and prepare or do you much prefer to hit the stage running on pure adrenaline?
A: The normal warm up exercises…. vocals, guitar and stretch and get my blood pumping.

Q: As everyone would be well aware now Scott Roberts is the newest member to Biohazard. When Evan left and you held auditions was there anyone that we would have known that applied or were they all relatively new comers to the scene?
A: There were some people from some bigger bands that wanted to join us and there were also a lot of people I expect to hear more from in the future whose talent was pretty obvious.

Q: We’ve hit the part of the interview where our readers get to find out more about the real you and the band… what was the first concert you attended and how much of an impact did that have on you musically?
A: Damn… that would probably be when I was five or six, I saw my uncle play in his band. There were like a few thousand people there. I remember being blown away and thinking to myself… that’s what I wanna do! When I got into punk rock and hardcore, it was all over… it was more about the emotion, feeling and message…

Q: Who have you been surprised to learn is a fan of your work?
A: Recently, I met the UFC fighter Dan Hardy; we hung out at one of our shows and after. Good times. Looking forward to training with him one day.

Q: What’s been the craziest rumour you’ve heard about yourself and or the band over the years?
A: There was a rumour that we broke into a record executive’s car to leave our demo on her front car seat… wait… that was true!

Q: [Laughs] And what do you think is probably one of the craziest things you’ve ever actually done that wasn’t smeared as a rumour?
A:You’ll have to read my book for that!

Q: Biohazard have certainly had a great run, lasting in an industry that see so many artists come and go. If they’re lucky they last two to three years these days, why do you think you guys have been able to defy the odds and last in an industry that chews up and spits our bands?
A: We’re from Brooklyn… why else [laughs].

Q: In this industry you’re constantly learning whether it’s in the studio, on tour or the all important business side of things.  What do you feel has been one of the most important lessons you’ve learnt to date?
A: When you’re tired, keep working… you can always sleep another time! All the so-called “secrets of success” will not work unless you do… get off yo ass and do something with your talent.

Q: Billy, I want to thank you again for your time, it’s been a true pleasure. I hope you have a blast back here in Australia.
Do you have any last words for our readers?
A: Thank you bro for your support and time! Keep up with us at our pages facebook.com/biohazarddfl and  facebook.com/billybiohazard. All the best for 2012 yo!

You can also catch them with Hatebreed, Raised Fist and Cro-Mags on the following dates-
28/2: Panthers, Newcastle NSW (A/A)
29/2: HiFi Bar, Melbourne VIC