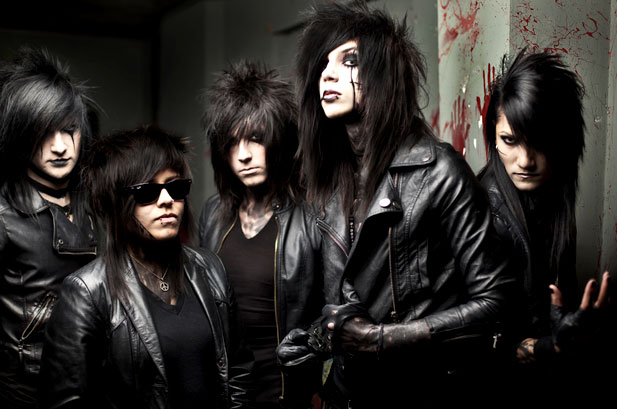 LA upstarts Black Veil Brides have climbed the mountain of fame and fortune in almost record time since the appearance of the video for their single “Knives and Pens” only a couple of short years ago. With YouTube views now in the tens of millions, among the highest t-shirt sales of any band in the US and a Billboard Top 40 entry for their debut, completely self-funded album We Stitch These Wounds, the neo-glamsters are heading to Australia in September for Soundwave Revolution on the back of their new release Set the World on Fire. Loud spoke to vocalist Andrew Biersack about his rock n roll past, Alice Cooper, the current state of rock music and why he is “Andy Six” no longer…

Q: Andy, how are you?
A: I’m doing all right. We got a day off today. It’s Independence Day here in the States so we’re gonna grill out and blow shit up in true American fashion. We’re on the Vans Warped tour right now and we’ve got today off. We’re somewhere in between our next destination, in the middle of the desert outside of Alberquerque I think.

Q: Plenty of room to blow stuff up then?
A:Exactly! That’s the plan.

Q: It’s going to be a series of big days here in Australia while you’re here, so what are you looking forward to the most?
A:We’re always excited about playing shows, but obviously we’re big fans of Alice Cooper and Van Halen and all those bands. So we’re really excited about seeing them.

Q: I can sort of tell that you’d be a big Alice Cooper fan.
A: Definitely. And what’s really interesting and what’s really cool is that Alice has been really complimentary of us, especially recently, in the press. He’s been saying that we’re the sort of band who’s bringing back everything that he loves about rock n roll music. So it’s really cool to hear that. And he was also quoted as saying that if we put out a really good record then the world is sort of ours to be the biggest band in the world. When you look at one of your heroes saying things like that about you, it’s definitely a very cool experience.

Q: Interesting that you say that, because there was a whole period of time, the 90s and into the last decade, where the sort of thing that you do disappeared completely and wasn’t seen to be very cool at all.
A: And look at what those people did to rock n’ roll music! They essentially ran it into the ground and made it invisible. You’re basically in the situation where the current generation of music listeners don’t know what it’s like to have rock n’ roll rule the world. It doesn’t exist. You look at any major awards show or the pop charts or anything else, they just don’t have rock n roll music represented there. It’s because the post-ironic crowd took over and decided that rock n’ roll shouldn’t be fun anymore and we should just be depressed. That’s not what it should be. It’s about rebellion and having fun and being what you want to be in your life and not giving up and giving in to those things that are upsetting you in the world.

Q: Well you’re certainly bringing that back. You’re only two albums in and you’re already very successful.
A: I think audiences around the world are sort of excited to see that kind of thing come back. I know for us it’s very cool to see that. We’ve made no sacrifices in terms of being who we want to be. This is the exact band that we wanted to be. So the fact that we’ve had success doing exactly what we want to do is definitely a great feeling.

Q:The Internet must be helping there as well. I checked out your Facebook page before and you have almost 600,000 fans.
A: It’s great. It’s definitely spreading.

Q: It certainly seems like it’s been a boon for you. You came to notice through MySpace with one song. Ten years ago, that would have been impossible.
A: Right. Well, when it comes to our band, we’ve had, until recently, no mainstream support or press and because of an audience that grew online, that’s created a cult following. Now we’ve broken through, and as I said it’s spreading. Some people would see it as spreading like a disease, and others will be happy, but I think you need that controversy to do what you want to do. I like the fact that our band is polarising people. People either love us or hate us. There’s very few in-between people.

Q: Well you really do have your haters, but that’s all part of it isn’t? Does that give you something to prove?
A: I don’t know. Most bands are as exciting as a bowl full of sugar-free vanilla pudding. There’s so many bands that are just sort of there, and that’s great, you can close your eyes and it’s a soundtrack to whatever. But I like the abrasive nature of what this band is, and I think that… there’s no one who just kinda hates us. The people that hate us go on the Internet and talk about how much they hate us, which is an amazing thing to me! I never disliked something so much in my life that I felt like I needed to go online and tell other people about that. I think it’s interesting. It only stands to make our fans stronger and feel more unified.

Q: I have to ask you about the whole Andy Six persona. I grew up with Motley Crue, and a lot of people are just going to think you’re ripping off Nikki Sixx.
A: I certainly went by that name at a younger age. I don’t really use it any more. A lot of fans still call me that and I don’t get upset. But I think that, as a kid, especially growing up where I did – I grew up in a very small place and my heroes were pretty obvious. I used that character to escape the drudgeries of being a kid in a small town. I grew up on comic books, and comic book characters always had their hero persona to rise up against the things that were shitty in their life. Especially a character like Batman, he used a disguise to become stronger. For me, Andy Six was a character I used to make myself stronger as a kid. Now, being that I’m an adult and in a successful band, I don’t really need it anymore. I’ll always understand and respect when someone needs a shield to hide behind. And now, as a band, we represent that shield to a lot of young kids.

Q: And those kids are your target audience obviously, and many of them have probably not really heard much of the music that influenced you.
A: Obviously we’re influenced by the glam bands. We’re also heavily influenced by punk bands like Deadboys, Lords of the New Church, the Damned and as much as we’re influenced by Metallica and Slayer, we have forty years of rock music to work with and we try to mix all our influences equally. It’s sort of a huge melting pot of all the things we like best about rock music.

Q: Coming from LA, you must have those influences surrounding you all the time even now.
A: Yeah. Well, I didn’t grow up in LA. I’m from northern Kentucky. I grew up in a small town, but I always loved the Los Angeles vibe and the hair band vibe, what have you. I moved out to LA when I was about 17, and hanging out was great.

Q: What was it like moving out there moving there as a 17 year old from Kentucky, and coming across that?
A: It was exciting. I mean, I didn’t have any money, I didn’t have a job. I never finished high school. I dropped out out of school and went for it. I lived in my car for a long time and I just had enough money saved to buy a piece of pizza and a pack of cigarettes every day and sort of make my own way. But through that and through growing up being in poverty while living out my dream it was sort of a thing that pushed me harder to make my dreams come true. Because if it didn’t, I’d just be stuck on the street.

Q: It sounds like a real rock n’ roll story.
A: I suppose so. I never saw it that way. When you’re stuck in the moment you don’t see it as being kind of a glamourous, rags-to-riches story. You’re kinda testy, you don’t have any money and you’re hungry. But I guess in retrospect, looking back at it, I guess it really was that. And that’s nice.

Q: The new album’s only been out a short time and it’s really taken off. How do you feel about it?
A: We’re incredibly proud of the new record. In terms of making something, it’s what we’ve always wanted to do.

Q: How do you compare it to the first one?
A: We really look at Set the World on Fire as being our first record. We Stitch These Wounds wasn’t even really distributed and wasn’t even out in your country!

Q: Well, being that this will be a lot of people’s introduction to your band, and you coming out here so soon after its release, this really is going to be a big tour.
A: Yeah, this is the first time… I’ve never even been to the country, so being able to play such a huge festival with such a huge reputation as our first, inaugural performance in Australia is going to be really exciting.

Q: Well thanks for your time today Andy. Before you go, I really have to ask: Are you going to be doing any more stage diving?
A: Stage diving? Well, I’d like to say that I’m not going to, but I’m a little too hard-headed for that. I’ll probably be wanting to do it again!

You can also catch them on the following dates-