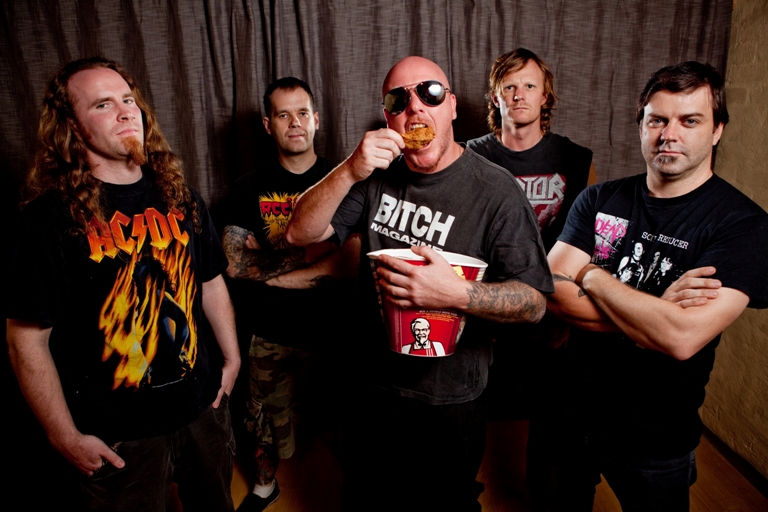 Blood Duster have been grinding and grooving away all over the Australian metal landscape since before many of the people reading this were born. Virtually inactive since last year’s Bastardfest, the legendary Melbourne five piece will be back in action for the tour again this year – and have a new limited release album to ram down our throats very soon. Cameron Edney chatted with Jason PC about where they’ve been, where they’re going and on-stage sex.

Jason, thanks so much for putting time aside to speak with us today. How’s thing going?
Good, not much to report really, everyone is happy and healthy as far as I can tell. As long as no one is dead, we’re cool.

Let us talk firstly about these Bastardfest shows… You’re billed on five of the seven  shows taking in the country. You guys must be happy to be a part of this great festival celebrating Aussie metal?
Sure, it’s a good excuse for us to get pissed with people we haven’t had a chance to catch up with since the last round of BF shows. Be much better than hanging around Soundwave all day hoping to see a band that’s any good. While we’re at it: Why are fuck all Aussie bands on there, if any? And why is no one jumping up and down about Soundwave pretty much taking a shit on the local scene by not including locals?

I honestly have no idea… that is a question best reserved for the promoters to answer. Getting back to Bastardfest though… for the metal fans that will be attending these shows, what can they expect when Blood Duster hit the stage. Got anything special planned for these shows?
We never really plan anything special, or at least haven’t for a long number of years. We will just do what we do and we’re glad that people still bother to turn out to see us. But that said, something generally always happens. It’s Blood Duster you know.

What in your opinion have been some of the highlight shows you have played to date?
Fuck man… there are too many. We’ve pretty much done everything we ever set out to do! We played ping pong with Metallica (and won). We’ve been nude, been in fights, fingered some people, been fingered… We’ve done pretty much everything a band can do within the law… and sometimes outside, I guess. We’ve definitely enjoyed ourselves and if that doesn’t get me in to some kind of heaven with a few virgins then fuck it, at least I’ve had a ball while I was here.

You are one Australian band that really has had the pleasure of sharing the stage not only with great Aussie bands but some of the best metal bands from around the world. Whilst touring who’s given you the best advice and what was it?
I can’t remember really getting any specific advice. I guess Rich from Brutal Truth was pretty spot on with eating whole cloves of garlic to avoid getting a cold.

The current Bastardfest bill has plenty of great Aussie metal bands billed, no doubt some if not all are friends. Who are you looking forward to checking out and playing alongside?
I Exist are always fun to see as Josh ex-Blood Duster/Pod People is with those guys. I helped with their last couple of albums, so we’ve got to know them pretty well. There are tons, Extortion are good to see, Fuck… I’m Dead are playing some shows this year so that will be good to see them again, The Kill are always good… Wait til people hear their new album. It’s a fucking killer. Broozer and King Parrot will be killing people; they are two of the best live bands Australia has right now I think.

Tell us about the set list for these upcoming shows. No doubt, as time goes on the task of putting together a set that makes not you guys but fans happy must be a pain in the ass.
We only do this for us so we generally do exactly what we want to do. Certain songs really work live and some just die in the arse. We generally go the scientific route of, do what works and don’t do the shit that doesn’t. It’s not an exact science but the laws that govern it are pretty solid.

You had a massive run of shows there for a while then decided to take a little time out. Do you think it was critical to keeping the band together to have that time apart?
Well… I wanted to break the band up as I’ve never really had the pleasure of killing a band and wanted to know what it feels like. Twenty years doing something gets a bit tiring, but everyone wants to continue so I guess that is what we will do, at least for the time being. We have the new album coming out and we’ve finally found a way to present it that has really made me happy and want to do new things. So we will be around for a little while yet, it seems.

You’ve been in the band from the very beginning. What comes to mind when you look back on those crazy crowds that have come out to see you. You have some insane fans. What’s the craziest shit you’ve seen happening in the crowd whilst playing?
I’ve seen a dude eating glass while we played, with blood squirting out of the side of his mouth. I’ve seen tits of all shapes and sizes. Shit dude, I’ve seen people fucking on stage in front of us. We’ve seen some crazy shit. All of it is more than welcome. You’ve gotta keep shit interesting.

[Laughs] Yes you do. It’s been sometime between studio albums… you have a new album on the way. What can you tell us about that?
Got a new album ready to be unleashed, I’m really excited to see the reaction. It’s called KVLT and will be available on limited edition vinyl only, no downloads, no CDs. No fucking way I want any posers listening to it.

You are no stranger to working in a studio, and no doubt you’ve learnt many lessons over the years whilst recording. What advice do you have for those upcoming Aussie rockers who are entering a studio for the first time?
Rehearse the fuck out of your shit, and if it’s your first time, book a couple days and demo your stuff. There will be nothing worse than going to make your grand entrance onto the recording world and fucking it up. Demo all the songs roughly, so you know what works and what you need to work on. Do not expect the demos to rule – but you will learn more than trying to do it in one hit. Also don’t try and be the engineer and the artist, it rarely works. Ask me. I know from experience. All it will do is hold up your band while you’re learning something new. Focus on your playing and making good music – leave the recording to some other fuck.

Just before we wrap it up, as we said the current run of Bastardfest shows will see you guys take in most of the Aussie states in October. What other immediate plans are in place for the band?
Not much. We will do a few shows in Melbourne and then start working on our follow up recordings for mid-next year… hopefully.

Jason, thanks again for your time mate. Have a blast out at these shows. Do you have any last words for our readers?
Thanks for reading, I hope it wasn’t too boring. Come to the shows and buy us beer, it’s always appreciated and you will make a friend. Look out for the new album KVLT. Out very very soon!