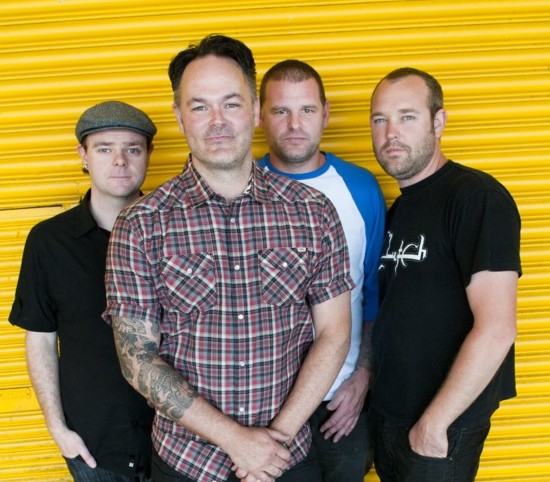 In 2009, Melbourne lads Bodyjar called time after fifteen years of energetic punk rock mayhem. Last year they reformed for a special show at the farewell for inner city venue The Arthouse and now they’ve scored the national support to this week’s tour by the Descendents and Bouncing Souls. Loud caught up with drummer Shane Wakker to talk politics, live music and getting the wheels turning again.

It feels a little weird talking to you today about Bodyjar, because we’d all been led to believe that the band was no more.
Well four years ago or whenever it was when we pulled the pin on it, that was essentially it for us. We’d had enough of it. It was time for us to put it to bed and go do other things and that was absolutely the end of it. But then last year we got asked to do the Arthouse farewell show and we figured it would be fun, and we loved the Arthouse so we did it we had a lot of fun doing it. After the show a lot of other offers started comng through. We didn’t want to do everything. We only do what we would want to do. And that was the whole point. We wanted to treat it as a bit of fun and not as a full time thing and not something where you have to do everything or where this tour is happening and you’ve got to go away and do this sort of shit. We’ve just been taking it as it comes and are we are and some other things have popped up now since then and we’re just having a lot of fun with it, I guess. Who knows?

Sounds to me a little bit like what happened for Tumbleweed when they kicked off again – next thing they got offered Homebake, then there were other shows and tours and a bunch of other stuff came from that.
Now I understand what it’s like for bands that have done that. Like I said, when we stopped we’d all had enough and it was absolutely the right time to stop playing. When you leave something for a long time and then that offer comes through, you go, ‘Oh, that might be cool,’ so you go back and it’s a bit of fun after three years or whatever. But you’ve definitely got to have that time away to actually realise that you’ve had something really good.

It must be a really big thing for Bodyjar to be supporting the Descendents.
I reckon in the time I’ve been in the band, and the time Ross [Hetherington] was in the band as well, this is one tour all the guys in the band are the most excited about doing. Because we’re all such big Descendents fans. Just the fact that they’re out on tour and coming to Australia and we’re supporting them in just awesome. We’re all pretty amped about the idea. We’re pretty proud. We’re on a flight and our manager told us… we were on a flight in the middle of last year and our manager said it might be a possibility and I just looked at everyone’s eyes and they just lit up. To see everyone’s eyes do that, we just thought, Fuck yeah! Hope that happens!

You mentioned playing the Arthouse farewell – what was that like, because it was such an institution and Bodyjar played there quite a lot? How would you say the live music scene is in Melbourne now? With the number of venues gone recently, it must seem bleak.
The Arthouse was an institution. We all played there in Bodyjar and other bands we were in. If you’re in a band, you could usually say you’d played the Arty, whether it was a Tuesday night or a Wednesday night, or how many times, or you’d just go there to hang out. And that’s why we did say yes to that show, because we loved the place so much and everyone involved with it. You can’t say no to that. So be able to play there, it was grouse fun! We loved it. I suppose in a way some things do look bleak because there has been a few venues closing, from what I’ve been hearing. But sometimes when a venue closes one will open somewhere (else). But to have a lot of the main venues like the Corners and the Espy’s always been fighting an uphill battle there… you won’t get rid of that. They have three separate areas for gigs every single night of the week. What venue can do that? Everyone can have a gig there. There is a lot of venues around, but when you get shit closing down because any arse who moves into their high-rise apartment in an area that’s always been there – it’s a pain in the arse. But that’s the way the council and the politics of it all works.

The Federal Government made some overtures recently about introducing policy protecting and developing the live music scene, especially in major cities, but with an election this year they probably won’t have time to actually do anything. If a party announced something that looked after live music around Australia, do you think they would get your vote?
Basically the way I look at politics is that they’re all a pack of lying dicks. That’s my thing. Every single politician – I don’t give a shit what party they’re in – they’re all gonna say stuff to please people when they wanna hear it and there are times when they do come out with the truth, but a lot of time they’re just talking out their rears. Which makes it hard to vote when you’ve got Dick 1 or Dick 2. It’s impossible.

And it’s not just government. It’s local councils. There was local council elections down here just recently and you’ve got councils saying they’re gonna do all this stuff and it’s all approved and then they get voted in and they take all the funding away from the local community projects and then say they’re not gonna do it. They’re just lying arseholes. [Having said that,] If a political party is going to touch on an issue like live music venues, and protecting areas where those venues have been and the institutions, of course I’d look at voting for that. They don’t realise how big live music is within Australia, not just in the cities, but all over Australia. It’s not just the cities. If you go to regional areas, some of the biggest music communities are out in the middle of nowhere. I’m not talking about the punk rock scene – although I’m sure there’s punk rock bands out in Woop Woop as well – but you’ve got the folk festivals and community music events and things like that, and they happen all over the shop. Fortunately I get to play at some of those things with other projects I’m involved in and it’s fantastic! So I don’t see why governments don’t look at it and put it in their plans. Because it is absolutely important and without live music and live venues, then I tell you what there’s a pretty big hole in their economy isn’t there, because they’re not going to make so much money out of their alcohol taxes if there’s no live music venues around!

Getting back to Bodyjar now – how long did it take to blow the cobwebs out before you got back to playing live again?
It takes a couple of jams, a couple of rehearsals to get back into the vibe, but to be honest it came together a lot quicker than we thought. I think because we were coming in quite fresh, which is what I think is good about the break. Because we hadn’t touched those songs in so long, and we hadn’t even thought about it, so we came in fresh and we were excited again. It took a little bit to blow the cobwebs out, but a lot of work and rehearsals and we’re all pretty picky about how we play – we all like to be tight. We got there and people have been saying that we’re sounding not shit! That’s the main thing.

So if one of the guys came along in six months from now and said, “I’ve just written a whole bunch of new Bodyjar songs”, what would your reaction be to that?
I suppose you’d go, ‘All right, let’s have a listen’. Like I said earlier, with how we’re approaching the whole thing, we’re just going one thing at a time and as things rear their head, we’ll look at it. So if someone was to come in with new music or a couple of tunes, we’d probably say, ‘Well, let’s have a jam on them’. All the guys write. Even when Bodyjar wasn’t happening they were all writing, whether it was for other projects or just for ourselves, they’ve always been doing that.