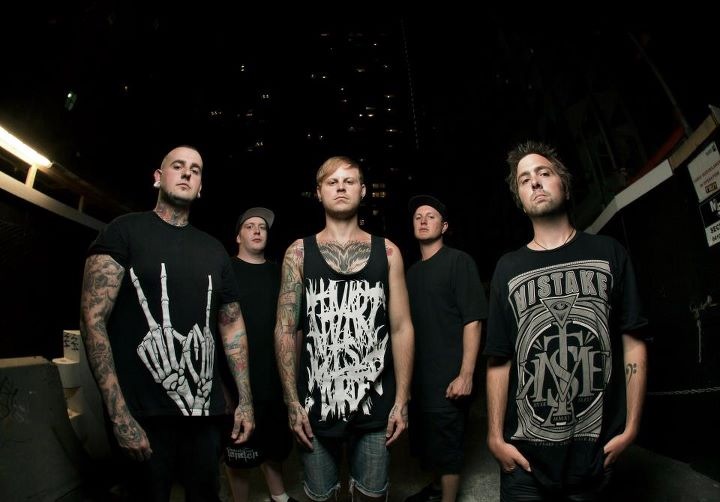 Boris the Blade: The Cutting Edge

Since forming in 2010, Melbourne bruisers Boris the Blade have made a serious play for the country’s modern death metal/deathcore crown left vacant by the premature departure of The Red Shore. The band has already released the crushing ‘Tides of Damnation’ EP and since recruited former The Red Shore guitarist/producer Roman Koester. Ahead of the band’s appearance on the Hobart leg of the Bastardfest tour, we grabbed bassist Coby Chatz for a quick Q&A about all things Boris the Blade.

Q: ‘Tides of Damnation’ was released last year to a largely positive response. Did you expect the material to strike such a chord with so many people?
A: Not really. Writing all of the material in Josh’s (Lording, guitars) bedroom as a three-piece, we didn’t think or expect much of it. It was just fun and to see what would happen. It was definitely a surprise to us and we’re all thankful for what the band’s become.

Q: Has the band begun working on new material, and if so, will it be for another EP or a full-length album?
A: We’ve begun writing at Roman’s Complex Studios for an album; it’s definitely going to be faster, heavier and catchier. The new material is definitely a more structured, mature sound (but) still keeping all the elements of the EP in there too. It will also have a different feel with Roman in the mix now.

Q: How exactly did Roman come into the picture?
A: We did CJ (McMahon) of Thy Art Is Murder’s guest vocals at his studio towards the end of the recording process of the EP. We still needed a second guitarist. Roman liked what he heard of us and gave Sharpy (Daniel Sharp, vocals) a call (a few) days later, saying he was keen to have a jam.

Q: As heavy as your music is, people on sites like YouTube are openly criticising the band for being “fake death metal”, “posers”, etc, presumably because of your image or logo and not the music. Is that kind of criticism something that bothered you initially but you couldn’t care less about now?
A: I personally couldn’t care less about it. People are always going to have their say, good or bad. We all just love making heavy music, getting on stage and having fun as a band.

Q: The band will appear at the Hobart leg of the Bastardfest tour. What are your expectations for this show?
A: Just to play some good shows – we’ve never been to Tassie, so that will be a great experience for most of us. It will also be great to have a look around and meet some new people. (We’ll offer) violent, ruthless death; we try to bring a show that people won’t forget.

Q: Does Boris the Blade plan to head to foreign lands in the near future for some touring?
A: Yes, I think after the album we’ll definitely head overseas; (we’re) looking forward to seeing the world.

Q: One thing I feel acts like The Red Shore could have done to broaden its audience was play a greater amount of shows with more “traditional” extreme metal acts. Is this something Boris the Blade hope to do in the near future?
A: We don’t really mind who we play with within the heavy aspect. Some of our favourite bands are in the, as you say, “traditional”, metal scene which we’d love to play with.

Q: Boris the Blade is still a relatively new band yourselves, but who are some other up-and-coming metal bands our readers should check out?
A: A young band from down our way called In Elegance and a Queensland band Tomb of Doom. Signal the Firing Squad are good mates, who just released a killer album, and also Thy Art is Murder.

Q: Any famous last words?
A: Come to a Boris the Blade show! More people need to get out and support Australian metal.