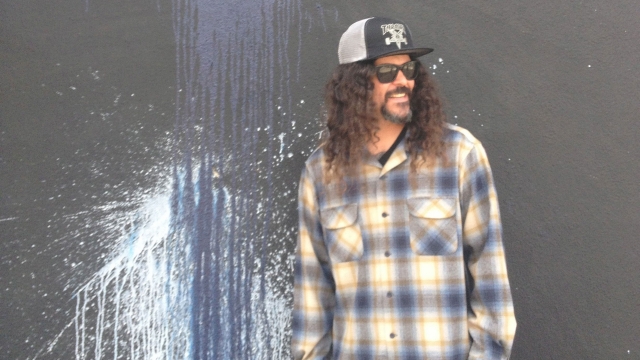 After a round thumping the tubs with Vista Chino at the Big Day Out in January, Brant Bjork is back in Australia, this time with his solo band. The California rocker has taken a break from recording a new album to perform a string of shows around the country that will wind up at a couple of festivals, Cherry Fest in Sydney and Astor Rocks in Perth, which will see him sharing the bill with the Meat Puppets.

“I’m super stoked. I just love the Meat Puppets,” Bjork says down the line a few days out from the tour. “They’re such a great band. I’m very grateful and honoured to be able to share the stage with them.”

Writing and recording a solo album wasn’t something that had been on the cards for Bjork at the beginning of the year. Following the release of Vista Chino’s Peace album last year and resultant touring that culminated with their appearances here, Bjork was all set on following that career path for at least a few more years. Unfortunately, vocalist John Garcia put paid to that idea.

“Bruno and Mike Dean and myself were really excited and we were anticipating coming home from Australia and working on a new record,” Bjork explains. “We were kind of shocked to hear from John Garcia that he didn’t want to do that. He wanted to do a solo record, which is something that I knew he wanted to pursue, I just didn’t know that he wanted to do it so soon. I was thinking we’d do another VC record, maybe even a couple of them, and tour for the next two or three years. So we were kind of mentally set up for that. But he obviously changed his mind, and that threw us through a loop.”

Despite some disappointment at that turn of events, Bjork says he went through a “trippy, uncomfortable transition that really turned into something beautiful”: a reawakening of his solo career. Judging by the amount of times he says the word ‘excited’ during this interview, it’s something that he was probably itching to get back to far more than he realised.

“We’re gonna bring down some new stuff,” he promises. “We’re real excited to play new stuff. In fact we got so excited that the majority of the set was going to be all new stuff because we were so excited and so in love with it, but we scaled back because we didn’t want to drop too much too soon; and also, you know, I get just as excited by some of the old classics and I’m sure the band will get excited as well.”

Bjork’s band on this adventure also includes Dave Dinsmore on bass, Hater guitarist Bubba Dupree – whom he describes as something of a personal hero – and drummer Tont Tornay. Brant Bjork is out front of this combo, a role that may be less familiar to those who know him only from his work with Kyuss but it’s one he became very comfortable with once he stepped out from behind the kit in the early 00s. It’s a different beast from the fuzzed-out desert rock thunder of Kyuss too, a band that, he says, is all about celebrating his childhood influences.

“My parents were a little older than my peers’ parents, so they were there when the original rock n roll happened. In my house, my dad was playing a lot of Little Richard, Chuck Berry, Ray Charles, Fats Domino – stuff like that. That music was probably how I fell in love with rock n roll. I was the youngest kid in my neighbourhood and there was a lot of older kids at my school, and they were into 70s rock like Kiss, Ted Nugent, AC/DC, shit like that… Queen. And I liked that stuff, but it didn’t move me the way the old rock n roll did. It didn’t have the same energy.”

He soon discovered what he was looking for, however, in the form of the simplistic garage punk rock attack of the Ramones.

“That’s when it all made sense,” Bjork says. “Because the Ramones, obviously, are an extension of that early spirit of rock n roll. It was the Ramones that really made me feel like, ‘Hey man, I can taste this.’ It’s exciting and it’s interesting and I think it’s love and I got involved and started playing. And at the same time I discovered the Ramones, a kid in my neighbourhood that I knew started playing drums and was really into Kiss; and he got into a band, and they were a punk band. I used to go watch them and sit on the floor and watch them rehearse. I think all that combined is how I got into punk rock. That was the portal into Black Flag and the Circle Jerks and all that shit, man.”

Brant Bjork believes in the true spirit of rock n roll, and he and his four piece band are now all set to unleash some of that good time rock n roll energy onto Australian audiences from tomorrow in Brisbane.

“We’re gonna rock AND roll,” he says. “It’s all about having a good time, man. People pay fifty bucks for a rock show so they can stop getting hung up about big, big shit for a couple hours and have a blast. That’s really what it’s all about.”