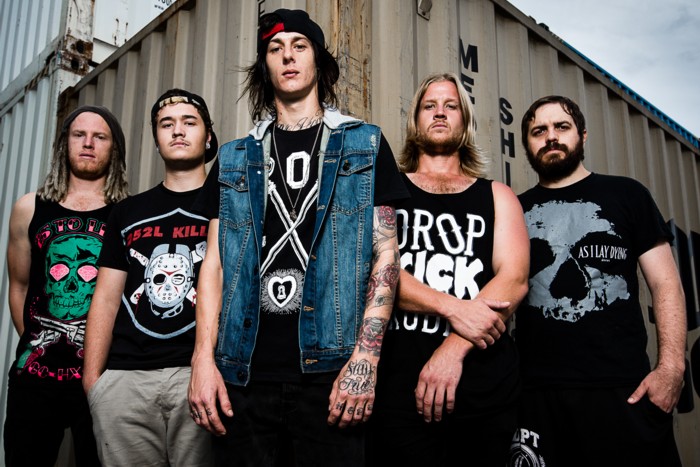 A Breach of Silence: Hitting the Road

Home > Features > A Breach of Silence: Hitting the Road

With sophomore album The Darkest Road about to drop and with an impending tour in support of Drowning Pool in the U.S, Loud caught up with guitarist Mat Cosgrove to answer some questions about the new release, tours and what’s next for the band.

Congrats firstly on your upcoming support slot for Drowning Pool in the U.S. It must feel good being recognised by some of these legendary bands, it seems Eclipse Records are pushing your name out there?
Thankyou. We have been working really hard and putting in a lot of time, energy and every spare cent we have into the band to push it forward. The staff at Eclipse Records are pushing us hard and it seems it is starting to pay off. We have also teamed up with the Lafayette agency in the states, so that in conjunction with Eclipse are making things happen.

And what’s next in line after that tour, will Australia see a tour before end of year?
An Australian tour is on the cards. I believe we are looking at around January or February for the Darkest Road tour. Our management in Australia, Mannequin Republic are in the middle of organising something as we speak.

How did you feel the recording process went for The Darkest Road – the end of result must be very pleasing?
The process was great. This time around we knew what to expect and we were pretty much ready from the get go. Having Henrik and Freddy there made this album a very easy process. The end result we are super proud about. The production is amazing and we think we have written these songs to make them as strong as possible.

As you say, Fredrik Nordstrom and Henrik Udd produced and the sound is bold and crisp, it’s really a first class production. Thoughts on those guys?
Our thoughts are they are the best producers in the world. They are an incredible team. Everything on this album is played, there is no cut and paste, the amp sounds are real, drums are real etc. They also helped make good songs into great songs with assistance in song writing. We had a huge learning experience with the first album we did with them and this time round we made sure our songs were up to scratch straight off the bat. You know you’ve done something right when Freddy and Henrik are making you add things to songs to make them better. It’s usually the other way round because the song is too long winded. I can’t speak highly enough of the guys. They really look out for us as well, always staying in touch and seeing how everything is going. Any assistance they can provide with anything they do. Legends.

Did you guys have any ideas or a direction for the new album prior to entering the studio or did you enter with a blank canvas and see what eventuated?
We had a clear idea going straight into this album. When starting to prepare for the album, we weren’t quite sure exactly the direction to take, however once we started the sound and style started to evolve based around Blair and Rhys’ style of vocals. As we had previous experience in writing an album we were much more prepared to adapt and we knew we wanted to hit hard with catchiness, melody and heaviness. I think we captured all of that through this album.

We’ve heard the new album, it’s fantastic, but what can fans expect, how would you explain the album to them and did you approach this album any differently than Dead or Alive?
Fans can expect a more mature sound. It’s still A Breach of Silence but you will understand when you hear it. The song writing is better, the lyrics are better, the sound is better, the guitar riffs are better. It’s like the older brother of Dead or Alive. A little older and experienced. We went into this album a lot more prepared then Dead or Alive and I think you people will hear that when listening through The Darkest Road.

Any music videos in the pipeline?
We are about to release the self-titled track off the album in a film clip. Final edits have just come in. The film clip is dedicated to a mate of ours who had an accident whilst at home and is now a quadriplegic. We wanted to show people that life isn’t easy, and if you choose a dark path of unknown then success is only around the corner. You just have to walk into the darkness and fend yourself through it. Just like our mate Dan.

It seems the band have quite a following overseas, obviously Eclipse Records (as mentioned) are pushing you guys hard, more so than locally? What is the reaction to A Breach of Silence outside Australia?
Chris from Eclipse Records is another legend. The guy picked us up knowing we were from Australia basically unknown anywhere outside of Australia and he took the risk. The risk I think now is paying off. He is pushing us hard in the states in particular. We are getting heaps of airtime on both Sirius Octane and Sirius Liquid metal (U.S radio stations) which have millions of subscribers so we are very excited about what the short term future holds for us in regards to the states. It’s strange that USA is embracing us in more of a mass then what Australia is. We have a cult following in Australia which is amazing, Brisbane and Melbourne in particular. It is building here in Aus as well. It is strange though how we have a whole team dedicated in the states for us (label, agents media), but in Australia it’s basically us and our manager “Tom” pushing us hard. However some great media outlets (like you guys) are really starting to get behind the band and its making a large difference. When we chat with dudes like yourselves and go into the private conversation of why particular labels and support haven’t picked us up in Aus to push us hard we are as bewildered as you (laughs). But, until someone see’s the light, Eclipse have our back and it’s a great feeling having someone like that behind you.

Can you tell LOUD about other ABOS experiences overseas that Australia may not be aware of?
Well we have been to NZ a few times and have had a blast over there. We have toured there quite a lot. Our upcoming tour with Drowning Pool in the States however is our first tour outside of the southern hemisphere. Momentum is building and we really want to show the world that Australia has another band worthy of showcasing.

Back to the band, a new vocalist on The Darkest Road, Rhys Flannery. Can you explain how he came into the picture and how is he fitting into the ABOS family?
Rhys was recommended to a few dudes we knew. Our last singer parted ways on mutual terms and as we released our debut album we needed a vocalist. Rhys came and he was the guy we wanted. The guy has heaps of range and is very talented. He has been signing with us for over 2 years now. It was finally good to release the new album where we can showcase how Rhys fits the dynamic of the band. I think he helped us grow into a more mature sounding band and gives us more of a different feel to our genre. He fits in very well.

The band have probably been described for the most part as ‘powercore’ though I can hear many more influences in The Darkest Road. Do you guys have a label for yourselves that you prefer and what have been the major influences on ABOS and your sound?
No we don’t really have a label for ourselves. Powercore is a good start though. That is because of Blair’s power metal elements are dotted throughout the songs. Major influences in our sound I guess have revolved around all of our backgrounds. Myself, I love early As I Lay Dying, Unearth, Devil Driver etc, Rhys is more into the A Day to Remember stuff, Kerrod’s into Parkway, Architects, BMTH, and well Blair, he loves everything power metal. So with that mix we are able to put some really cool elements together when song writing. Catchy, bouncy, heavy and melodic all in one. Our sound really comes from just jamming out random riffs and then the hard part is making writing into a good song. Hopefully we have achieved that on this album.

Lastly, many bands around Australia are pushing on social media and more than likely behind the scenes for a local spot on the annual Soundwave festival. Is that something ABOS strive to appear on one day and do you attend Soundwaves?
For sure. We would love to play Soundwave. I hope that we make enough waves in the scene so we can make that happen. If AJ likes your band then you have a good chance. I guess that’s why a lot of bands push on social media. AJ and his team are onto it. They know what Aussie bands are making noise in the scene and if they think you are making enough, they will make room on the festival for you. It’s great to see Soundwave really starting to push more Aussie bands, as we have some of the best heavy bands in the world. We all usually attend Soundwave, it’s a good time of year. We are certainly getting spoilt for choice with Soundwave with every big band ever you can think of playing the festival. But always keen to see old faves like Slipknot and Lamb of God.