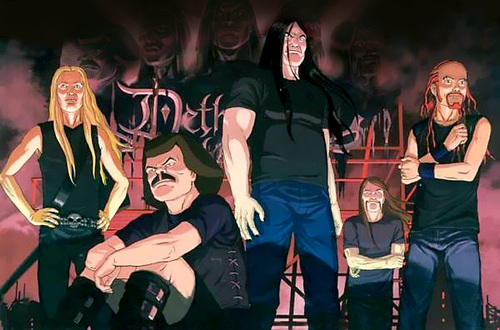 As the co-creator, composer and voice actor of the animated death metal comedy series, Metalocalypse, Brendon Small can check rocking out with Iron Maiden, chilling with the boys from Mastodon and releasing the third season of his hit series off his to-do list.

Q: Did you ever think when you began working on Metalocalypse, that one day you would be all the way in Australia promoting its third season?
A: That’s the reason I started doing it, so I could get a free trip out of somebody! When you’re putting a TV show together, you just want to keep your job. It’s a fickle mistress, it can slip away from you very quickly. Luckily people have found this show and embraced it.

Q: Why do you think so many people have embraced it? The fans are so committed!
A: I think it may be the simple fact that I don’t think the demographic has been catered to. I think it’s that simple. Beyond that I think it’s luck.

Q: You’re a writer, actor, voice actor, musician, producer, composer – how does that all fit into your life and is there one aspect that you enjoy more than the others?
A: I think it all started with music. Music taught me the discipline to be able to write and rewrite… I don’t think I had discipline before music so I think it makes me a stronger writer. It makes me try harder to be better. It’s really fun to be able to produce a show. When you hit a wall, you turn around and write music and just keep using different parts of your brain to hopefully achieve the goal. Now there are so many instances on the show where I can use music to save the show in some ways, to help tell a story or what’s on a characters mind… it’s all the same thing. If you write, you should be able to edit and you should be able to act and you should be able to compose a different kind of score if you play music. I think it’s all the same thing, you just have to look at it from different angles.

Q: Do you think that in ten years time, music will be the main thing you’re working on?
A: I get bored very quickly so I think I will try and do music whenever I feel it’s necessary. I want to do live action stuff, I want to direct, I want to act and there are things that I want to do that I haven’t be able to do yet. I’d like to challenge myself to do things I haven’t done.

Q: With the show, do you write the music first and then the story or the story first and then the music?
A: Storyline comes first and that’s always tricky. Especially with the third season making the half hours play and feel as smooth and quick as the shorter quarter hours. So it was really difficult getting the stories tracking and making sure you’re on the characters side. Music for me, maybe because I’ve developed a bag of tricks, I can come up with music pretty quickly. The tricky part about music is writing a new thing on guitar and trying to have to trick my hands into playing it properly.

Q: You’ve been described as having an authentic death metal sound, how did that come about?
A: I just wanted to write music that I wanted to hear. The one thing in death metal, because the vocalist is not as melodic, it’s more a percussion instrument… you can’t sing notes, you’re belting out these things, so I wanted to make sure that guitars were really melodic so that they could drive the song by itself. I use a lot of classical harmony. I love bands like ELO and Queen and Bowie. It’s not just Cannibal Corpse and death metal. My ear responds to melody and strong harmonic movements so I put that in so there’s a riff that you want to hear.

Q: What other bands do you listen to?
A: There’s so much metal that I love. I am a guitarist first and foremost. When you’re in suburbia, no matter where you are, once you discover guitar, you gravitate towards music that features guitar the most and for me that was metal. I’d listen to Black Sabbath and Metallica, Anthrax, Megadeth and King Diamond and Slayer. I really am a fan of strong melody and strong harmony. It doesn’t matter if it’s Paul Simon or Cannibal Corpse, as long as the song is functioning on its own logic and drawing you into it… I think everyone loves more than one kind of music. I stopped having guilty pleasures, they’re my actual pleasures now. It is OK to like David Bowie.

Q: You’ve toured the Dethklok music and you’ve headlined for Iron Maiden and Soilent Green – is it weird being in the studio one minute and the next you’re on stage?
A: It definitely is strange but if you’re prepared it’s not so difficult. Music is so much easier than doing comedy live. I used to do that. You are teetering on the brink of destruction in comedy with every word you say. With playing metal, you’re already prepared and you just show up and hit your mark and play your part properly. You connect with the audience and you win. It’s much more simple. Of course the preparation is twenty years of guitar playing and making sure you hit the pedals at the right time but playing metal live is very taxing and takes years of practice but it’s much easier than doing comedy live. It’s more embarrassing to fail in comedy than in metal.

Q: Dethalbum II was the highest charting death metal album in history!
A: Yeah originally the first one was but we beat it with the second!

Q: That’s pretty amazing, does that blow your mind?
A: Yeah I was completely blown away. My philosophy is this: as far as entertainment, I have to like it and then I’m done. If anyone likes it beyond that, then it’s lucky. I have to be at peace with it when I send it out. The music is the same way. If other people like it but I know what I like and dislike what I’ve done before anyone else tells me.

Q: Pretty cool to beat yourself out of the number one spot with your own music!
A: It’s both a luxury and humiliating to have been beaten by myself.

Q: Do you have a favourite song to perform live?
A: They’re all a lot of fun. I actually played in Brisbane the other night with Klokblok, the Dethklok tribute band, which was a lot of fun but I didn’t sing which actually makes the playing so much easier but I really like playing “Thunder Horse”, that’s fun. It’s fast but it’s easy.

Q: Mastodon voiced an episode of the show recently!
A: Yeah they did, in Season 3. I’ve been a fan of theirs for years and I got in touch with their management. Last year I toured with them so I think they were in town doing music for a movie and I was really impressed with them and their comedy chops. They’re just really funny guys, they are goofy and really silly. The drummer has an incredibly sense of humour. You would never know. Everyone in metal… I hate to out them all: they’re all nerds who love Star Wars and comedy.

Q: Will you be touring some more in the future?
A: I am finishing a solo record that I did and I am doing a record that I’m singing on. It’s metal but it’s more melodic. I’m trying to coin the phrase “high stakes intergalactic metal”. It’s a concept album that’s ridiculous but takes it self as seriously as a heart attack. There will be lots of double kicks and distorted guitars. I think it will be ready in early 2011.