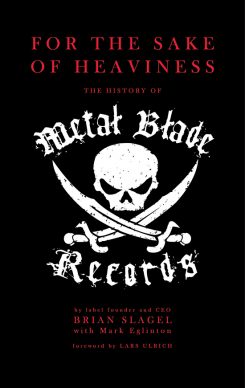 Brian Slagel is probably one of the best known figures in metal music who has never played in a band. Since 1982, the now 56 year old LA native has been the driving force behind Metal Blade Records, the powerhouse independent label that helped launch the careers of Cannibal Corpse, Armored Saint, The Black Dahlia Murder, Lizzy Borden, Sacred Reich, Voivod, Whitechapel, Amon Amarth, D.R.I. and dozens more, including, most significantly, Slayer and Metallica.

With the label now celebrating its 35th year, Slagel has just told his story in For the Sake of Heaviness: The History of Metal Blade Records. It’s a volume as eminently readable as Slagel is likeable and easy-going as he calls in for a chat on the company phone.

“It was pretty amazing looking back on it now,” he says of the early 1980s, when he was working in a suburban record store with his ear tuned to the British heavy music scene. “I didn’t really know what was going on [locally]. I was working in a record store and I was pretty obsessed with the NWOBHM and what was going on over there, and then [Bitch guitarist Dave Carruth] said to me, ‘Hey, there’s some pretty good bands over here’. So I said, ‘Ok, I’ll check ‘em out’. And I saw Mötley Crüe and Ratt for $1 on a Wednesday night at a club in LA, and they were both pretty heavy at that point.”

Slagel had already begun putting together his fanzine The New Heavy Metal Revue with his friend John Kornarens by then, and before long was writing for British magazine Sounds. Editor  Geoff Barton had coined the term ‘New Wave of British Heavy Metal’ to describe the upsurge of young metal bands springing up around England, spearheaded by acts like Raven, Saxon, Venom, Diamond Head and, of course, Iron Maiden, who in 1981 were just beginning to break through internationally. Slagel describes it as “crushing” when, the following year, he and Kornarens visited England to find that not only was the NWOBHM over, Barton had apparently never even liked it that much.

“I was a huge fan of Sounds and we had a huge buzz about it so when we went to meet Geoff he was kind of like a god in our eyes,” Slagel recalls. “And he was like, ‘Yeah I wasn’t really into that stuff much, I was just covering it because that’s what it was’ and we walked away from that going, ‘Wait a minute. What? What was that?’ It was the end of innocence, I guess, but also sometimes you have got to learn that things aren’t always what they seem to be. So it was a good lesson when we learned that.”

The magazine also shit-canned Slagel’s self-financed compilation Metal Massacre, his now legendary collection of LA metal acts that contains the first-ever recording by the fledgling Metallica and kicked off Metal Blade, giving it a one-star review.

“When you pull back the curtain sometimes, it can be a little sobering,” he says of that experience, although that first trip to England was overall a positive one and inspired him to plough forward. Pretty soon, through an arrangement with his distributor Greenworld, Metal Blade began to become far more than just an idea.

“After [Metal Massacre] came out I got an opportunity through one of the distributors who was doing the manufacturing and distribution deal that if I’d bring them stuff they’d pay the manufacturing. Even then I didn’t know it was going to be a label. I just said ‘OK cool, I’ll go talk to my friends and see if there’s any way we can put something out’. And then I said, ‘OK, well, I’ll see how this goes’. I definitely never set out on that path at all. I guess it fell into my lap a little bit and I made every mistake possible along the way. I learned from that and I sort-of kind-of figured it out.”

He has kept sort-of figuring it out ever since. He’s lost bidding wars with other independents (Megadeth), seen his bands snapped up by majors (Slayer, Armored Saint), traded off others on the verge of success (Goo Goo Dolls) and almost lost everything because of a steadfast refusal to start releasing on CD. Metal Blade has been through it all, yet remain in the game after nearly four decades while so many others – Combat, Music For Nations and Megaforce among them – have long since fallen by the wayside.

Luck, he admits with a chuckle, has helped, along with the fact that Metal Blade has never been tied to any particular genre or movement except for metal itself. Even more punk-flavoured bands like DRI, Corrosion of Conformity and, most famously, Goo Goo Dolls were attached to the label at various times.

“We were sort of all over the place just doing what we liked, and I think that really helped because when one scene fell away and bands got bigger and then something else came in we were able to move around to all those scenes and stay relevant.”

That level of flexibility helped them to steer through difficult times: “I think we’ve learned to be able to embrace whatever’s happening and not be afraid and run away from it and I think that’s what happened with a lot of people when a big change has come. So instead of crying about something that’s not going right, I’d much rather go out and figure out how to embrace and use it to our benefit and I think we’ve done a pretty good job of navigating those waters over all these years and I think that’s […] why we’ve still been able to do this.”

Metal Blade’s longevity could also be attributed to Slagel’s philosophy to run it with the same sense of familiarity and community that he sees exists within the metal scene overall.

“The metal community in general is like one big family and we try to emulate that as a label,” he says. “Everyone who works at the label is a fan and we like all the people we work with and it’s the same thing with the bands, so it’s one big family and we try to make it that way. I think that’s one reason why we’ve been able to keep going for twenty, thirty years and keep bands for twenty or thirty years: it’s a big, positive place to be.”

Certainly, Slagel has been able to maintain lifelong friendships with many of the label’s alumni, like Kerry King, with whom he is still close, and Lars Ulrich, who describes him as “the true vanguard of heavy metal” in his friend’s book’s foreword. Slagel describes with obvious affection his relationship with Armored Saint, Metal Blade’s second-ever signing, that eventually lead to one of his favourite moments in the label’s history.

“If there’s one moment that I had to pin down, it would be Armored Saint’s Symbol of Salvation record,” he says. “They were the first band we signed to go on to be signed to a major label and they would always mention us whenever they would do interviews with major music magazines and for a tiny little label, that was a big thing for us. We stayed friends throughout the years with those guys because of what they did there, and then they got to a point when their guitar player Dave Prichard passed away. He was their main songwriter and they pretty much broke up at that point.”

Indeed, Armored Saint’s story may have ended with the leukaemia death of Prichard had it not been for Slagel’s intervention.

“Before Dave passed they had made all these amazing demos. I went to the band and said, ‘Hey these songs are so good, Dave would not want you to not put these songs out. You’ve gotta make it happen’. So they put the band back together and we were lucky enough to work with Dave Jerden who had made a record with Jane’s Addiction and they went in to make what is still one of my favourite records on Metal Blade ever. That’s one memory that will always be very special to me.”

Metal Blade oversees a fiercely loyal roster of artists, several of whom like Cannibal Corpse, The Black Dahlia Murder, Lizzy Borden, Six Feet Under and Job For a Cowboy, have never been on any other label. Others like Gwar and Amon Amarth have associations going back decades. Slagel’s self-confessed hands-off approach has probably played a big role in that, even if it has occasionally led to some questionable releases like Six Feet Under’s notorious (and notoriously bad) Graveyard Classics series.

“He’s funny with that sort of stuff!,” laughs Slagel in reference to SFU’s Chris Barnes. “He loves doing those things. The weirdest one was… the first Graveyard Classics record did extremely well, it was one of the biggest-selling records we’d had up to that point. It did really, massively well. So when he decided he wanted to do another one I was like, ‘Ok fine, the first one did really well’. But he wouldn’t tell me what he was doing and I wasn’t in the studio when they were doing it… it was a big secretive thing. So when I went to the studio to hear the progress of what they were doing, he played me all of Back in Black and I was like, ‘Really? You want to do that?’ I’m the last one to tell an artist what they can and cannot do, but that was an interesting choice. I think those things are fun, but the last couple haven’t done as well as he would have liked them to, that’s for sure.”

Thirty five years on, Brian Slagel and Metal Blade are both still much the same as they were in 1982, a man passionate about heavy metal music and a label that does pretty much what it pleases. It seems to have worked pretty well so far, and if it ain’t broke – why fix it?

“The DIY attitude was influenced by the whole NWOBHM thing and companies like Neat Records and the vibe over there. It’s always been that way. It’s fun. I enjoy being a small label even now because I can wake up in the morning and decide to do something without having to ask a group of people if it’s ok to do it, or not.”

For more information on For the Sake of Heaviness: The History of Metal Blade Records, follow this link.