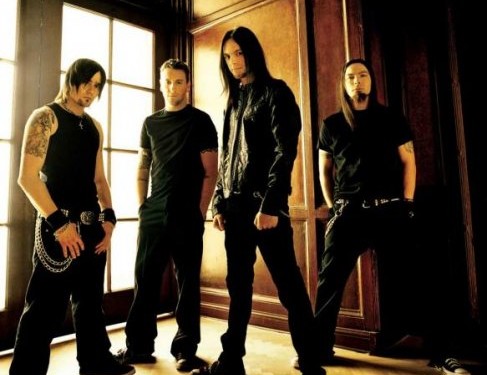 Bullet For My Valentine: Catching the Fever

Home > Features > Bullet For My Valentine: Catching the Fever

Young British upstarts Bullet for My Valentine have certainly taken a rocket to success after emerging from Wales with a five-album deal from Sony almost a decade ago. The band’s past two albums hit the ARIA charts in the Top 10 (Scream, Aim, Fire #5 and Fever #6) and they have been pretty regular visitors here since their first tour in 2008. Due in Australia once again with the Soundwave Festival, Loud spoke with drummer Michael Thomas.

Q: What’s the band been doing the last few weeks?
A: Just taking some time off. Matt is on holidays, just chillin’ out. Most of the guys have just been chillin’ out. I’ve been drumming, I have.

Q: You’ve had two consecutive top 10 albums here in Australia now. That’s pretty impressive.
A: Yeah, we’re really proud. When we were there not so long ago we got a nice plaque with all our achievements we’ve had from Australia. We love coming down to Australia, so we’re really happy.

Q: As you said, it wasn’t that long ago that you were here, and now you’ll be down again soon for festival shows.This is obviously a place you really like to come.
A: We love it. It’s like a second home really, being British. We love to come down and you guys get our sense of humour and stuff and you’re the only place on the planet that really does get the British sense of humour. Which is really good for us.

Q: The reaction to the last album has been universally good, which is a bit of a change for you guys because there’s always been that ambiguous critical reaction to your stuff up until now. But everybody seems to really liked the latest one.
A: Yeah! That’s a nice thing. It’s kinda weird to not really have a bad review. But I think people are kind of into us now because they realise that we are the future of hard rock and heavy metal.

Q: Obviously when you first started out there was that criticism that you were just an emo band trying to play metal. You’ve gone far beyond that now. You’re three albums in, and people have come to accept that you’re here to stay.
A: Yes well… I’m a little skeptical as well of new bands, the older I get. I’m a massive Metallica fan and massive Iron Maiden fan, and nothing really new turns me on the same way. So I can kind of realise where these people are coming from! But there are some good bands out there, new bands that we really like, and if they’re really good… like, we think we’re good songwriters. So if it’s a good song, there’s nothing to complain about really.

Q: There’s going be a lot of people out there who do still see you guys as young upstarts. Do you think this gives you an opportunity to play to the older crowd who may not have seen you before?
A: Definitely! Our goal has been, from day one, if one person walks away impressed and wants to listen to us more then that’s a goal achieved for us. So this is going to definitely be a big thing for us to steal as many old school metal fans as possible.

Q: Well there’s plenty of time between shows this time. Do you think it’s going to be more like a holiday for you guys because there won’t be the pressure there to be headliners?
A: There’ll be a weight off our shoulders. We’ve just come off our biggest tour ever, right around the world. So it’s gonna be nice to be playing a forty minute set and then go off and watch Iron Maiden.

Q: What’s it been like for you guys, young blokes from Wales who’ve just done this massive tour? What do you think now when you go through that experience?
A: It’s still a bit weird for us… We don’t really talk about it and we don’t really think about it because we just carry on as we’ve always been. I dunno… it’s weird… it’s a really weird topic that we never really talk about. There’s nothing worse than bands saying they’re gonna be the biggest band in the world, blah blah blah… And they last a year, two years tops and then they just crash and it’s kind of embarrassing if you’re in their shoes. We just take the bad with the good and live for the moment. We just take it day by day.

Q: Matthew’s come out and said that Fever was an easier album to make than Scream, Aim, Fire was. What was it about the process that made you feel that way?
A: It was just more relaxed. We went into the recording studio knowing that we had a good bunch of quality songs rather than going in to Scream, Aim, Fire… kind of writing them out and then recording them, and of course Matthew lost his voice. He had a lot of problems there. It was just more relaxed when we had the ammunition before we actually released it.

Q: Most people seem to agree that it’s the most complete album from BFMV so far.
A: Yeah, the hard part’s gonna be trying to follow up this album with the next one I think [laughs].

Q: Is there going to be pressure on you to get to work on another album? Are you working on songs now at all?
A: We will be at the end of the British summer. We’re gonna start thinking about the next album. I don’t think there’s going to be pressure because myself and Matthew have always said that we’re not going to release an album unless we feel that it’s strong enough. If it’s not ready for three years, it’s not ready. We want to put out an album the best we can.

Q: It’s great that you can give yourself that timeframe because back in the old days, bands were expected to bring out an album every nine months.
A: Yeah it’s good for us because we don’t have to rush and think about things too much. It’s really good. Much more relaxed.

Q: If you had to pick three songs from your career so far that summed up Bullet for My Valentine for someone who’d never heard them before, what would they be?
A: [Long pause] Umm… “Hand of Blood” from our first EP, that’s pretty rare. “4 Words (to Choke Upon)” from our first record Poison… and “Your Betrayal”, the first track off our new record.

Q: Well it’s going to be great to see you out here playing our Soundwave Festival very soon.
A: Yes, we’re very much looking forward to it. Thanks!