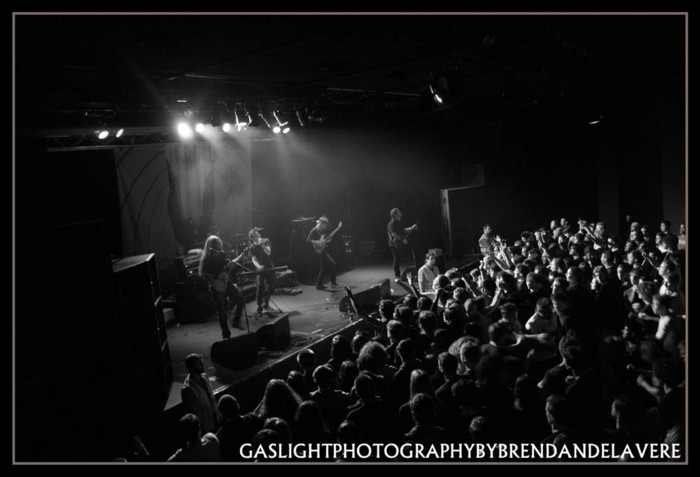 Between the Buried and Me: No Parallax Error

Home > Features > Between the Buried and Me: No Parallax Error

It was only twelve months ago when Between the Buried and Me brought their densely technical metal wizardry to Australian stages. Following a successful US run on which they played their latest deeply philosophical concept piece Parallax II: The Future Sequence, the band is returning Down Under this week to play the album for Aussie prog fans. We caught up with frontman Tommy Rogers to discuss his motives.

Great to talk to you today Tommy. You’re going to be back in Australia very soon and it doesn’t seem like you were here all that long ago.
I know. This is the quickest we’ve come back to another country to play, ever.

You obviously really enjoyed the previous tour.
Yeah, definitely. Australia’s always been a good place for us. We’re excited to take the new record there and hopefully people will enjoy hearing it in its entirety. It’s gonna be a good quick little trip.

I remember speaking to you when the first Parallax came out and asking you if you were planning to do the whole thing in its entirety and you said you weren’t sure. Was there ever a plan to do it or did it just work out that it was possible?
Well, once we were sure that it was gonna be a full concept and that it was gonna flow from point A to point B we knew we would definitely do it in the US. We’ve done that a few times before, but this will be the first time we’ve done a tour for a full album outside the US. It will be a nice way to test the waters and see what kinda reaction we get, and hopefully it will be a success.

It seems that a lot of bands like to test the waters like that by coming here. Why do you think that is?
I don’t know! (laughs) You see, the thing for us it that we have a bigger following in the US than we do in Europe and Japan and a lot of places. Australia is one of the few places where we feel like we have a similar following; shows are getting bigger and bigger and bigger. So, it’s definitely a market where the size of our band is increasing with every tour. So it’s kind of a good market to test it. I don’t know why. It’s always seemed that shows have been very good there. It’s a country where people enjoy music a lot. In some parts of the music, you don’t get that exact same vibe. So that might be the reason behind it.

Are people getting into the concept?
Well, I think it’s like anything. There’s people that care about it, and there’s people that don’t really care about it. And that’s why we’ve created a record where you don’t need to dive into that world if you don’t need to. It is something that you can just enjoy, but we’ve created a whole lot of different ways for the fans who really want to dive in to really get into it. We made a book with all the illustrations, everything… all the layout, everything, it all wraps around each other. It’s all like a one suite piece. It’s what we’ve always wanted to do, and I think it’s the perfect record to do that with. The people that want that are very appreciative of it. And the people that don’t, they can sit around and enjoy everything without looking into it. Whenever I listen to a concept record, I love to read it and get into it. But that’s just the nature of the beast. It’s there, for people that want to dive in.

If you’re going to do a concept record, there’s going to be a point where you have to do everything like that regardless of whether you think it might work. And if you’re a live band, there’s going to be a time when somebody says you should do the whole thing.
Yes, exactly. I agree. At some point I’ve always wanted to do both A and B – both parts. But as far as a tour goes I think it’s physically tough, and as far as touring we can’t afford to have days off in between. Some fans says, Well some bands play two, two and a half hours, and I say Yeah, they do, but they don’t scream and play blastbeats! (laughs) I could play a three-hour rock set any day. But we you stay playing technical music – especially the EP. When we had to play the EP in a live setting, it’s gnarly! It would be awesome to do, but a whole tour? I don’t know if I would be talking!

Perhaps you could do a special showcase?
Yeah, that would be cool. Who knows? When we did the Colors LP we did an hour and forty minute set. But the next day I was like, ‘I could not play a show today. There’s just no way’. Luckily we weren’t on tour, it was just five dates. This kind of music is very taxing on your body. Even this tour… we have a day off today, and I really need it today. It’s a lot of music, in our show.

So where do you take the next one? Do you have any ideas right now?
We have no ideas right now. We always dive in head first, and it’s not time yet. We’re still in touring mode and there’s definitely things that I come up with. There’s always things that I think about and try to write about, interesting concepts and whatever, but we haven’t started doing anything.

Where to next after Australia for Between the Buried and Me?
Next year is getting in the planning stages right now. We’re definitely doing a few things. But right now nothing I can really talk about right now. There certainly will be other tours!