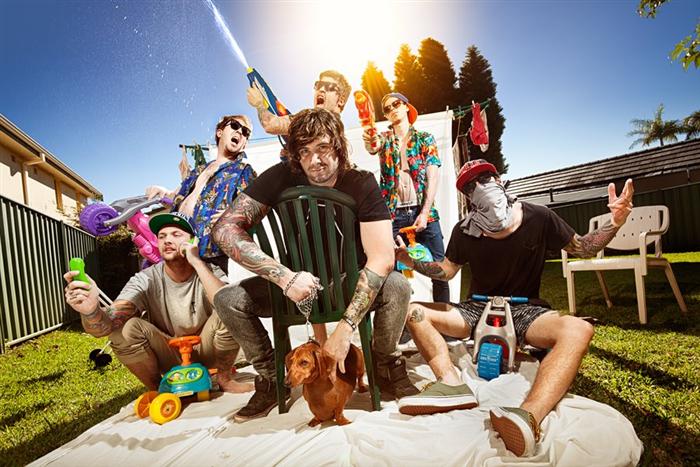 Buried in Verona: The Notorious B.i.V.

Buried in Verona’s Richie Newman is about to take a seat in the tattooist’s chair when the call goes through. The extremely laidback guitarist is less scarred than vocalist Brett Anderson but admits that getting indeliably marked with ink plays a major role in the lifestyle of himself, the band and its fans.

It seems a natural way to begin the interview considering the cover of Buried in Verona’s new album Notorious, featuring a brillliantly illustrated male torso, modelled by a friend of the group. The band name and album title appear in the heavy bling around the headless body’s neck, like some kind of parody of slain rap star The Notorious B.I.G. Newman says that wasn’t really the intention.

“To be honest, we just don’t give a fuck about anything,” he says. “I know people are gonna see it as, “Oh no, you can’t do that, that’s so shit.” Who cares if it’s shit? We don’t take ourselves too seriously. It kind of looks like the alternative album cover that he would have done if he was tatted up… I don’t know.  We just put it together on the spur of the moment, because we never plan anything. So it just came out like that.”

While that assertion may be true for the band in general, Newman definitely had an agenda when he set about trying to join Buried in Verona. From a mate who helped out on tour and in the studio when they needed a drummer, he’s now one of only two original recording members remaining in the line-up.

“I was playing the drums on Circle the Dead for a tour, and I knew all the boys beforehand, just being mates,” he recalls. “I helped them out when they had no drummer. I watched the band progress through that record. They weren’t doing too well. And I went to Sweden with them to record the Saturday Night Sever album. I went over there just to help them out with production and writing. I didn’t even know how to play guitar at this point. I just decided to do everything I can to be in this band. It was something I like doing, hanging out with the boys and playing. So I taught myself guitar for five hours a day.”

Somewhat humbly, he admits that he’s no great shakes on the instrument.

“To this day,” he says, “I don’t know any other bands’ songs on guitar. I only know our songs!”

A lot has changed for the band since Saturday Night Sever, subsequent tours with Resist the Thought and guest slots with tourists like Soilwork, The Haunted and The Devil Wears Prada. Three members – guitarists Kat Chituta and Mick Taylor and bassist Scott Richmond – have departed and earlier this year Buried in Verona switched from the Riot! label to UNFD. The music has changed as well. Notorious sees the blossoming of a new Buried in Verona as they step away from the restrictive world of metalcore and into more expressive musical territory.

“It’s a massive change in direction,” the guitarist admits. “The remaining members in the band, after the other three split, we weren’t really into metal – the traditional metal stuff – in the first place. We’re all fans of all weird types of music, and we don’t like to stick to one type of genre. The new three dudes think the same. So it was kinda anything goes for this record.”

A lot of the aggression is still there, but now it’s tempered with space and much more melody and some experimenting. There’s even a couple of power ballads.

“If you like something, if you like this funky part, if you want to do this fucking jazzy bit, just do [it]. Whatever makes you happy, that was the mentality,” Newman says of the writing of Notorious. “Of course we want everybody to like it. But we’re not writing for a genre anymore. We’re just writing songs, to create good music. Everybody says, ‘Oh, we’re just growing up as a band’… I think it’s a bit of that, but we’re just letting go of keeping to that one scene and that minority we were playing to.”

Notorious hits the shelves on June 1, and two weeks later Buried in Verona gets in the van for a massive month-long tour – with new members Dan (bass) and Sean Gynn (guitar) and guitarist Nate Martin – that will see them hitting the east coast from Townsville to Hobart. By then enough people will have heard the album for the band to know if they still have any fans left. There’s no doubt Notorious is going to cause a storm of controversy from those who will be expecting the breakdowns and mosh grooves of the last two albums.

“I’m nervous for this tour, to be honest,” Newman says. “I don’t know how people are going to receive the new album. It’s a lot different to Saturday Night Sever, so it could go either way. It’s make or break. Hopefully they like it and they enjoy it as much as we do. But I’m a bit nervous, a bit anxious to just get on the road. I’m sure the rest of the boys are as well. If it fails, we don’t care. It’s a good record and we love it, so whatever. If it goes good, well, that’s a bonus!”

Richie is keen to get back to Europe with the band. He can’t say enough about how much he enjoys it there.

Buried in Verona has faced their fair share of criticism here at home – including from this very website – but Richie Newman honestly doesn’t seem to care about that. At one point, he says fans should “fucking burn the album” if they don’t like it. “Throw it out,” he says. “It doesn’t matter.” Yet when he hears about the smackdown Sydney death metal mob Ouroboros got from 3AW’s Neil Mitchell after they were awarded a federal grant, he takes offense.

“It’s horrible doing that. You’re killing people’s artform by downplaying their shit. If you put down someone’s art… who the fuck are you? I’d like to see them get out there and do it,” he says angrily. “That sort of stuff is shitty. It’s just a shitty thing to do. If you don’t like something, at least be constructive about it. Don’t just say it sucks. There’s no point doing that. It makes yourself look like a dickhead.”

He takes a breath.

“I don’t understand the thinking in some people’s brains. But you always get hate no matter what you do. That’s just the world that we live in. There’s a lot of people who appreciate art and appreciate freedom and that sort of stuff, but it’s very rare to have that constant flow of freedom and people respecting everybody. There’s always gonna be a glitch.”