Caligula’s Horse is a band that knows a little something about how to present themselves. Their take on modern progressive metal is melodic, multi-layered and emotional, embellished with stunning visuals that are carried across album covers and videos and augmented by lively, energetic live performances. One of the chief architects of the band’s conceptual aesthetic is guitarist Adrian Goleby. A visual artist and filmmaker, he was already associated with Caligula’s Horse before becoming a member of the line-up last year and played bass with the final incarnation of Arcane, which also featured vocalist Jim Grey.

“I’ve been working with Caligula’s Horse prior to being in the band, doing all their live videos and music videos and things like that, so I got to be part of the visual process,” he explains, with the sounds of suburban Brisbane in the background. “‘Turntail’ was a big one for us. We planned that meticulously, working with Clare Burton the dancer quite a lot with what the choreography was meant to mean. Even Jim’s slight background in dance that he had, he was able to contribute to how they wanted her to move, and what colours they were using and how the colours would be revealed.”

Colours are an important aspect of the band’s self-presentation. Their album art is vibrant and bright, intricate and open to interpretation, and with the pressing of their first two releases onto vinyl that art has been done justice at last.

“The really good thing about the Moments From Ephemeral City artwork being on vinyl is that it looks way more like what Sam (Vallen) has on his wall at his studio,” Goleby says of the elaborate peacock-themed image from the first album. “He’s actually got that painting on his wall. He’s got the In Contact painting on his wall by Connor Maguire. Those paintings are real, and it’s good to see them in that quality as well.”

The quality aspect is carried over into the pressings themselves naturally enough, with guitarist Sam Vallen overseeing the re-packages with his perfectionist eye.

“I can’t wait to see the reception to [the re-issues],” says Goleby, “to see what people are picking up on. I know Sam’s absolutely thrilled with the quality of them, being so close to those projects when they happened. He’s meticulous when it comes to checking up on masters, and he’s just like, ‘Please, let’s credit the guy who did the masters’”

The newest member of Caligula’s Horse, Goleby wasn’t party to the band’s first three album on a musical level, although he was working closely with them even then. Now part of the line-up, he’s developed a deeper appreciation of the band’s creative energy and songwriting craft.

“I’ve been learning some of the songs that were written before I joined, and after I joined, and getting to know the guys as a band, not as much as an auxiliary member, and learning how they came about, and how fast some of them came about. ‘Song For No One’, for example, was one that just appeared out of the aether basically. And you can really feel an urgency to that, the creativity that goes into being urgent and patient about a song, there’s such a complexity of emotions. I’m privileged to work alongside Sam and Jim because they are able to translate that very, very, very easily into what they create.”

As mentioned, Goleby’s role in that creative process is bringing those songs to the screen. The clips for the In Contact tracks ‘Song for No One’ and ‘Will’s Song’ were directed by him. He believes that well-directed and nuanced clips, engaging social media and strong visual presentation play no small part in developing the character and personality of the band beyond just another musical act. It’s something he thinks is equally as important as the musical side of any band.

“This is my main thing in the band: I do a lot of the content creation, pretty much all the Instagram social media that you see, and incorporating that is part of being a band now. People are like, ‘It’s all about the music!’ Well, take a good hard look at yourself. How you’re represented and how people perceive you is part of being in a band now. We don’t all have the luxury of publicists and content creators making stuff for us so your personality comes out in your social media, your music personality as much as your onstage personality, and making sure that people can connect with you because of that is kind of a challenge.”

The band’s next challenge – if that’s an appropriate word – is a three date east coast run kicking off this weekend, after which they’ll be in Europe. Joining them on the local shows are guitar prodigy Ivanyi and former C-Horse guitarist Zac Greensill’s band Opus of a Machine.

“I guess it’s a bit presumptuous to call it a tour because it’s only three dates,” Adrian Goleby says with a chuckle, “but I can’t wait to do this because I’m a bit itchy to get out and have a dance on stage. That’s a big part of Caligula’s Horse that got me into the band, prior to joining, the energy of the shows and the vibe.” 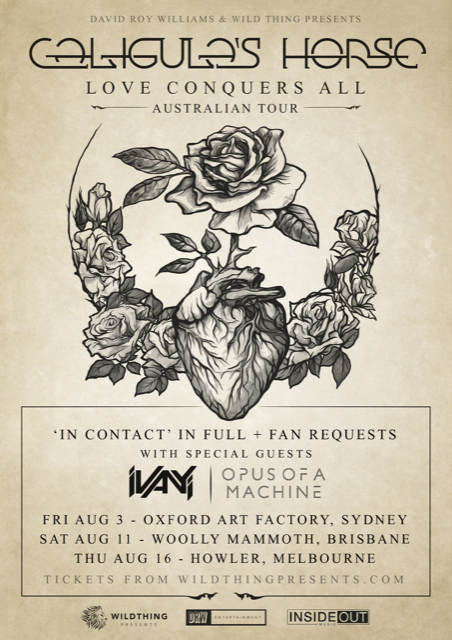