To those who aren’t naturally creative, the artistic process can be a thing of deep mystery. Even for more artistic types, art itself can be an enigma. How many of us have stood baffled before Jackson Pollock’s Blue Poles, struggled to find meaning or cohesion in a film like Eraserhead or wondered what it is that Yoko Ono does, exactly?

The exploration of art itself and what it is that drives people to create it is at the heart of the new album from Brisbane prog maestros Caligula’s Horse. A dense, sprawling and intricate work, In Contact examines its subject from four different points of view, artists who are seeking meaning and relevance in both their work and their lives.

“Every chapter is about a different type of artist,” explains singer and lyricist Jim Grey. “There’s a painter, a musician, a poet and a sculptor and each of them is unique and their stories aren’t connected in any way other than thematically, and on top of that they each have their own musical themes and their own musical style that we use for each one. So you’ll notice that musically, each of the chapters is very different from one another. All of those artists are reaching for something. They’re trying to make their lives better as well as seeking for something in their art.”

Those shared yearnings of humanity are also part of In Contact’s thematic core. Each movement’s central character could be seen as a metaphor for society as a whole.

“The fundamental themes that run through the album,” Grey continues, “are the inter-connectedness of human beings, that despite the fact that we might be very very different – we might hold opposing views, even – there is a shared face there in our own humanity and our own reach for something more, and in our need to create.”

Humanity’s innate need and ability to communicate artistically is one of the key characteristics that separates us from other living things. The rise of commercialism, the inability of many people to appreciate the nature of art and the lack of importance societies sometimes place on education in artistic fields has led inevitably to art’s commodification. The value of what is created is now often considered only in monetary terms, skewing or even obliterating its true importance and merit. This is most obvious in the more popular artistic spheres like music.

“People are trained from birth to treat art as a commodity,” the singer says. “Especially music: you buy the album, you purchase these things, these are yours now. I think that may be why a lot of people tend to feel ownership over the artists that they listen to and artists that they enjoy, and why they feel betrayed when it seems like they’ve done the wrong thing. [The consumers] feel like they own it. So that’s almost a societal issue in that people are sort of trained to think that way from the start.”

Particularly when it comes to music, this leads to typical arguments about what eras or what genres of music are better, or what it is that constitutes good music in the first place.

“If we had a more broad appreciation of what is art, then people wouldn’t live in a box of what music is to them and anything outside of that isn’t [music],” Grey argues. “So you get dad-rock guys with their own little hero narrative where ‘their’ music is real music and ‘back in the day’ is better than now, and you hear that all the time. In the same way, somebody that listens to pop radio might hear something that’s progressive and think, Well, that’s not music. They have a definition of what music is and that’s what’s in place in them throughout their life.”

Grey offers no definitions of art or music himself, but as an artist he has a clear idea about why he creates.

“I endeavour as an artist to reflect myself. That’s my entire thing. Which is why I can’t see anytime in my life where I won’t be doing any kind of creative exploit whether it be poetry or writing or music. The whole thing that drove me is self-expression, moreseo than music. Self-expression is what I do and that’s something that doesn’t go away.”

Like all good art, Grey explains that In Contact is open to interpretation, from the lyrics to the building on the album’s cover, designed by Irish artist Connor Maguire. What might be construed as a crowd of people flocking to a church is actually a gathering at a town hall, an image that reflects the themes of human connectedness.

In Contact has already scored heavy plaudits from critics, most of whom acknowledge it as a logical progression from 2015’s exemplary breakthrough album Bloom. While both are recognisably by the same band, it could only be expected by fans of Caligula’s Horse that they are also both very different albums with very different themes and dynamics. They are also, of course, both excellent.

“We always aim to do something that’s not super far removed from what we’ve done, but enough to grow and take a step forward,” Jim Grey says. “We’re not sitting in a room deliberately trying to be contrary to what we’ve done in the past. For the most part we like to reflect who we are in the present, and that’s always going to change from album to album.” 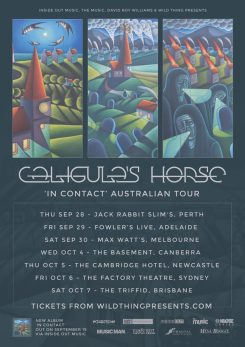