“That whole thing was stupid because we’d never been to Australia. We’d never proved ourselves. Meanwhile the headliner is not only from there, they’ve proved themselves big time!”

Travis Ryan from Cattle Decapitation is talking about the imbroglio surrounding his band’s first Australian tour, when many fans expressed their disdain about Thy Art is Murder being the headlining act. It seems some people couldn’t accept the idea that the underground San Diego grind monsters would consider an invitation to tour with a deathcore band with an album in the Top 30. Or maybe they just thought Thy Art sucked. Either way, Ryan laughs at the controversy just as he did when we discussed it at the time.

“When I got asked if we wanted to tour with Thy Art is Murder, I was like, ‘Well I haven’t heard of them, let me go look them up’. And the very first video I looked at was this sold-out, crazy, packed show and people going fucking apeshit, and I’m like, ‘Yeah, we’ll tour with them!’”

“It was flattering to see people react the way they did, but,” he points out, “it didn’t help us get to Australia any quicker! We still tried for two years to get there this time! I don’t know why it’s so fucking hard to get something going on over there.”

Ryan straight up admits that he’s been trying to get Cattle Decapitation back Down Under since The Anthropocene Extinction was released in 2015 but the ran into a tangle of dodgy operators and scammers. The closest they got was an invitation to be part of The Black Dahlia Murder’s tour last year but had to decline.

“We actually got asked to play that Black Dahlia, Faceless, Putrid Pile thing and we almost did it,” he says. “But it didn’t make sense financially, and we’re grown men and we said ‘Sorry, it has to make sense financially’, so we had to turn it down. And then when the Faceless didn’t show up we were like, ‘Goddamn it! That could have been us!’ But it’s all worth it if we can make it happen eventually. It didn’t have to be two years ago, just as long as it happens.”

The Anthropocene Extinction is Cattle Decapitation’s seventh album, a violent and intricate exploration of humanity’s harmful influence and wilful destruction of the environment. It’s a volume that Ryan is particularly proud of.

“My favourite album is always the first one, and whatever the last album was,” he says. “That’s because the first one is something I never thought possible and whatever the newest one is the one I’m most hyped about. Not just because we’re touring on a new album but because I think we make progressions and we move forward. That’s what we’ve been doing. The main record we play is usually the newer stuff so this tour is going to be the last few records.”

The album landed them in the Billboard Top 50 and like the thematically-similar predecessor Monolith of Inhumanity set them even further from the myopic view of them as vegan extremists. Theirs is a global activism, one that holds a mirror up to human activity as a whole.

“I’m probably never going to touch on US or other governmental policies,” Ryan explains. “I speak a little more generally than that, I guess. That’s just an area I just don’t want to go.”

He mentions that a previous interviewer had already asked him if Cattle Decap was likely to tackle any of the contentious political issues arising in the US at the moment.

“It’s hard to make heads or tails of everything and everyday it’s something fucking new! What the fuck is happening to this country? As long as there’s humans governing other humans, I’m going to have plenty to talk about.” 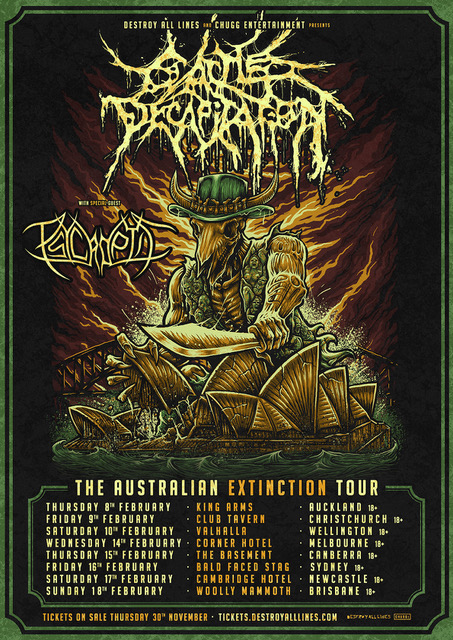