Church of Misery: Then There Was One

Home > Features > Church of Misery: Then There Was One

Latest release: And Then There Were None… (Rise Above Records)Website: www.churchofmisery.net

One of the world’s foremost stoner doom bands return to Australia this week, the serial killer obsessed Church Of Misery, as the headliners of Doomsday Festival. They will also be visiting New Zealand for the first time. On the eve of their tour, Loud Online caught up with bass player Tatsu Mikami, who founded the Japanese outfit back in 1995.


Church Of Misery first toured Australia for the first time in 2013, as part of the Doomsday Festival. What were the highlights of that visit for you? Apart from playing shows, what would you like to do while in Australia and New Zealand on your upcoming tour?
I remember that we played four shows in Australia 2013. We really enjoyed everywhere! Everything were highlights to me! If we have a time, we want to sightseeing. But now, typhoon just striking Japan and I worried about tomorrow’s flight. [Don’t fear, the band made their flight okay].

The band’s most recent release, And Then There Were None…, was recorded with Scott Carlson [vocals, Repulsion, Death Breath, Cathedral], Dave ‘Depraved’ Szulkin [guitar, Blood Farmers] and Eric Little [drums, Internal Void, Earthride]. How did that come about? Was there ever any intention to play live with that line up? Or was it always intended to be a studio only collaboration?

Well, except me, three guys quit Church Of Misery in late 2014. At that time, I already wrote some new songs for upcoming Church Of Misery album. I didn’t want to stop Church Of Misery’s activities and I want to show our fans Church Of Misery are still alive. So I need to create new album. New album is reason for existence myself. Church Of Misery toured hard for this ten years in Europe and US. I have tons of band friend now. Soon I asked to some reliable guys to ask join our upcoming album recording, it’s Dave Szulkin. I deeply influenced [by] his song writing, guitar play and guitar sound. Its roots of Church Of Misery. Church Of Misery also supported their Japan tour [Blood Farmers, in 2008] and I played bass on their stage, like jam session at that time. I think it’s gonna be great album when he agreed my offer. He is really awesome. As for Scott, Church Of Misery always have brutally voice style. I asked to Lee [Dorrian, Rise Above Records] that how about Scott Carlson? Cause I like Repulsion and met few times. Above all, he is also Rise Above family. And I got good answer from him. I excited again cause Scott Carlson are going to singing in Church Of Misery album! Of course I really satisfied with current album. But that is just ‘recording project’. So I didn’t have a will to play shows by this line up.

What is it that you find so fascinating about serial killers?

First of all, I disgusted about typical lyrics by typical stoner band’s “smoke weed get high” or “trip to the unknown galaxy”. It’s boring to me. In the beginning of Church, I’ve been reading and watching about “serial killer”. It’s really fascinated – process from normal guy to psychotic killers. It’s very, very interesting story. And I thought that these topic is very fit to our heavy and doomy music. That is the reason I choose this topic. And this Church Of Misery combination is really strong and brutal. It’s best for Church Of Misery.

How far does your interest in serial killers go? Does it extend to collecting art by serial killers? Or writing letters to them in prison?

Never. As I answering above question, I just interested in process from normal to psycho. I know some person who writing or meet them in prison. But I don’t interested in it.

What plans do you have for the band after the Australian and New Zealand tour? Are you going to be recording a new album with the current line up?

We already have a plan for some tour next year. We cannot tell details about that now. Besides touring, we will spend much time for new songs rehearsal. Hopefully we will enter the studio late next year. We already a few songs and one of them are about Unabomber. 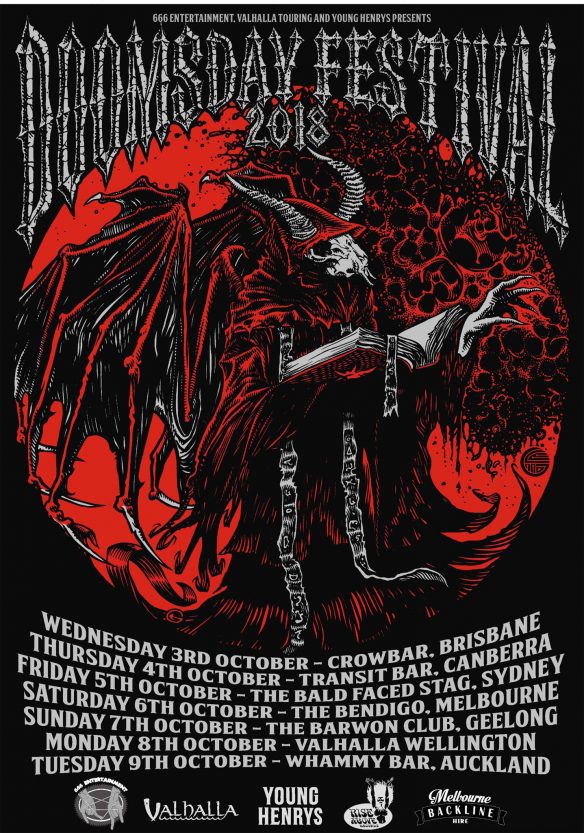