Claim the Throne: Fire and Flames

During the early 1990s Australia’s metal scene began to fully flower. The east coast capitals sprouted bands like weeds that began to draw the attention of local punters and underground clubs like never before. Perth thrash unit Allegiance was the highest-profile metal act of the time, racking up supports on major international tours and appearing nationwide with the 1995 Big Day Out. Paradoxically, Perth’s remoteness from rest of the country meant that the remainder of the dynamic and thriving metal culture there existed in almost complete isolation. Except for iNFeCTeD, who gained a modicum of notice through a brief relationship with Shock Records, the WA scene was virtually ignored in the east.

As a young metal musician with a band struggling to make headway outside of Perth and surrounded by colleagues facing the same challenge, Glenn Dyson decided to take action.

“Back in the 90s there was no mention of WA bands,” he says, name-checking Loud in its early print zine version as one of the few outlets to give his scene much exposure. “That’s part of the reason why I started my label Prime Cuts. Someone had to do it, just to try and get Perth bands heard over on the east coast. There was a whole bunch of bands over here in Perth that no one knew about.”

The biggest hurdle for most of the bands was a financial one – traveling from the west coast to the east was prohibitively expensive and the distance involved made it impossible to journey back and forth every weekend like other bands were doing between the eastern centres. Even Allegiance, with label backing and a national profile, only got across from Perth as an opening act on other tours or for festival dates. Booking their own shows was really out of the question.

“It’s probably a little bit easier nowdays to put shows together. With Facebook and everything now it makes it easier to contact people and arrange shows and arrange gear share and somewhere to crash out and borrow a car… whatever you can to save a few bucks,” Dyson reasons. “I think plane flights are a little bit more affordable now, but they’re still expensive.”

Dyson, or Dysie as he’s known to everyone except perhaps his mum, recently wound up the Prime Cuts label but continues to run a touring agency alongside his friend Brad Wesson. The inspiration behind Soundworks Touring was the same – bands he liked weren’t going to Perth, so he decided to take them there. Before long, he was booking Australia-wide tours for some of the biggest names the worldwide metal scene including Cannibal Corpse, Morbid Angel, Napalm Death, Behemoth, Iced Earth, Obituary and more. The connections he’s made along the way have eased the burden when it comes to organising shows for his own band, melodic death metal machine Claim the Throne, who are currently on a national tour.

“It costs a bit, but we try and do it as cheaply as we can. Borrow gear and stay at friends’ houses so we can make it as cheap as possible,” he says of the band’s methods.

Claim the Throne’s fourth and latest album, On Desolate Ground, is their most cohesive so far, a recording that marks a significant departure from the folk-flavoured albums of their past. It’s a natural progression from the heavier direction the band took on 2013’s somewhat chaotic Forged in Flame.

“There’s quite a big jump from [2010’s] Triumph and Beyond to Forged in Flame,” the guitarist admits. “We are writing for ourselves first and foremost but we try to make the songs as good as possible. It all seemed very natural and there was never any struggle with writer’s block or anything – it was almost too easy in a way!”

The band took the second half of 2016 off from touring to work on the album, spending a month in the rehearsal studio piecing together the various ideas they’d devised. As only the second album the group has recorded with the same line-up, there was much more of a united vision for Claim the Throne’s direction.

“The first one [with this line-up], Forged in Flame, we were probably still feeling each other out with our own styles and influences,” Dysie says. “This time we had discussed it quite a bit and decided where we wanted to go with it: a heavier, faster, darker approach but still maintain the melodies and we wanted to push ourselves with our songwriting and our playing and take it a little bit more seriously than we had done in the past.”

On Desolate Ground concentrates on the band’s melodic death metal side, employing a wealth of dynamics, contrasting vocals from Brendan “Cabba” Capriotti and Jesse Millea and bouts of acoustics and keyboards. The folk elements remain as echoes in the structure of many of the tracks, but Claim the Throne has moved a long way from the jokey Aletales EP. Dysie is hopeful that the new album will open further horizons for the band.

“We’re all good friends and we like hanging out together and going on tour and playing wherever we can so we wanted to hopefully open up a few more doors for us and get to some parts of the world we haven’t been to yet.”

The band was in no great hurry. With recording wrapped in late 2016, the band shopped it around for a possible deal but eventually released it themselves in October last year. Critical reaction since then has been roundly positive, echoing Dysie’s own sentiments about Claim the Throne’s maturity and the album’s overall congruence. Not long after it appeared, the band played their first shows in more than a year, on Wintersun’s Australian tour. Those shows, followed by some in Japan, blew off the cobwebs and allowed them to try out a few new tunes in front of an audience.

“We’re at that point now where we’ve got to be a bit more selective with our set choices, because we all like different songs live,” Dysie says with a chuckle. “That’s the only problem that we have, we have different ones that we enjoy. So to compromise we might change things up at different gigs.”

Along with the regular live shows, Claim the Throne is also putting on an all ages workshop event at Born2Rock Studios in  Gosford. Dysie is hoping that he and his bandmates can share some of the expertise they have amassed from their different avenues of experience.

“Rather than just do a regular show,” Dysie says of the rationale for the idea, “we can make it a Q&A and if there’s anyone from the younger crowd – or even the older crowd – who want to come down and pick our brains, I’ve done Prime Cuts and we’ve done a fair bit of overseas touring and a lot of DIY. Cabba and Ash have a podcast. Jesse’s a music teacher, so she’s probably the most qualified – and best – musician out of all of us. Maybe we’ll have a little panel and people can pick our brains hopefully we can inspire people to become more involved, from learning how to play an instrument to booking international tours.”

Dysie’s tenacious DIY-attitude has carried him a long way from his early days on the Perth scene. If there’s one guy on the Aussie metal scene aspirant metal promoters and touring bands can learn a thing or two from, Claim the Throne’s guitarist is the man. 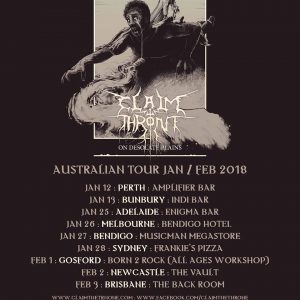