Clowns: Figuring it Out

Home > Features > Clowns: Figuring it Out

Forging a name for themselves with abrasive but jubilant records and a reputation for barely controlled mayhem on stage, Clowns have become hot property on the Australian independent music scene. With album number three expanding their repertoire into realms of psychedelic freak out, we caught up with drummer Jake Laderman to explain their motives.

Now that the album is out, what are your personal thoughts on Lucid Again?

We’re at the point now where we’re starting to read reviews and stuff like that. I’m starting to feel more confident about it now. I think that every time we’ve come to record I’m always in two minds about it, you want it to be good, but you think that maybe people are gonna hate it. But I feel really good about this one.

A friend of mine who used to be in Massappeal mentioned to me recently that he thought Clowns had a similar musical approach. Hearing something like that must make you quite proud.

Wow, that’s a bit of an honour!

There’s a lot of people I’ve met from the Waterfront scene and stuff like that – bands like Hard Ons, Hellmenn, even Massappeal – and find it really awesome when they come to shows or say that we remind them of what they were like. It is a bit of an honour. I often forget how influential the Australian punk rock scene was back then. We’re touring with an American band (Night Birds), and all they’re talking about is picking up early punk singles. That’s what they’re really excited for.

Clowns shows can get a little bit crazy. Have you had many problems with venues wanting to keep you from coming back?

I guess we’ve had our share of issues from people about a crazy man hanging from the rafters. We do our best! Most venues know what they’re in for before hand. There’s a couple of venues – I won’t name anyone – that have had security briefings with the band before a show, to tell us what not to do. Quite often the people just know what they’re in for and they just kind of go for it. Maybe we’ve already created a vibe and people just come to the shows to go apeshit.

How does Lucid Again compare with your previous album?

Our previous record was fourteen songs. This one has nine. The previous album had songs that run for under 90 seconds, this one I think the shortest song is three and a half minutes. I would say it’s less of a hardcore record and more of an experimental, psychedelic punk-wave-pop-anything you want to call it. I think we really did our best to expand on guitar effects and even different rhythms. One thing I was very conscious of when contributing to this was keeping all the songs rhythmically dynamic – not all the same pace, not all over the place – and it was just a really fun one to write, and it got a bit weird because of that.

‘Not Coping’ is nine minutes long! It’s also a bit of a freak-out.

Yeah! Well, that’s the longest song on this record. On the last one there was one that went for eleven minutes! Those songs are fun. When we were writing this one, we were like, Well, people like that, and we like it, so let’s keep doing it. Why not do it again, and venture down other avenues? That one is pretty jammy and spacey but it also breaks down and seems very improvised in a way.

What do you think people who are more into your hardcore stuff are going to say about Lucid Again?

I think there’s always going to be people who say, Oh, it’s not as good as your last record. Each to their own. I’m not one to pass judgement on that. I don’t write for people like that. We write for ourselves. Ultimately if people like it, they can buy it. If not, save your twenty bucks and blow it at the pub!

We mentioned the Hard Ons before. They’ve always been a band that’s played to the beat of their own drum. How important do you think it is for bands to diversify and try different things?

The Hard Ons are one of those bands that write music the way they want to do it. Their last record has a lot of metal and it also has a lot of power pop and stuff like that on it. To me, a lot of the bands that I like tend not to write the same album over and over, and the love of music really shines through. I feel that people would be bored if we just wrote another Bad Blood. 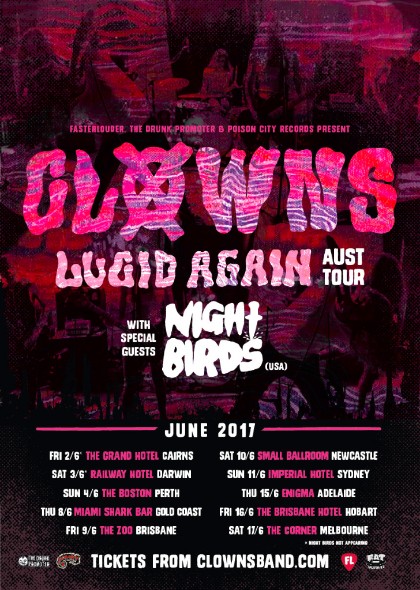