30 years on from their breakout release Blokes You Can Trust and the Cosmic Psychos are about to go back where they belong: on the road. Mainstay and road veteran Ross Knight agrees that it might be a little optimistic to plan an album launch and national tour in light of the current situation where things open up for a few weeks just to close down again, but it’s what they do.

“Well what do we do? Do we just sit around? This record should’ve come out a year ago and the whole thing is, if this doesn’t work, we’ll just put out another one next year, and go next year. It doesn’t matter.”

Unlike some other bands, the Psychos can afford to do that because it won’t have an impact on their lifestyle.

“We’re really lucky,” Knight says in his famously laconic way. “Because we all work… the band is our hobby, we don’t rely on it for our living.” He is quick to acknowledge the plight of other members of the live music scene, however: “I really feel for other bands, venues, people who work in venues and stuff. The music industry’s really being shafted by all this stuff. Yes, I know it’s important, I know it’s a pandemic, or whatever, but don’t put 20,000 people at a footy game, or a rugby game, and then tell a venue you can’t open up! It’s just stupid.”

State premiers and sport ministers continue to bend the rhetoric around COVID restrictions to allow money-spinning and potential super spreader events like the NRL State of Origin to go on, while music venues like Sydney’s Crow Bar are forced to hold crowdfunders to stay viable. Knight reckons making music into sport might be the way to go.

“If we had the Dune Rats vs. the Chats vs. the Psychos in a heptagon in front of 10,000 people, we’d probably be allowed to do it! They’re lovely guys, so I couldn’t fight them. I’d have to referee. Or we’d just sit in the cage and drink ourselves… last man standing. I reckon we’d have more of a show then!”

He doubts he’d be able to keep up with them these days, even if the Psychos’ new album is titled Mountain of Piss.

“I’ve had my day in the sun!” he admits, with a hearty chuckle.

Mountain of Piss is the ninth Cosmic Psychos album and the second they’ve put out on their own label, Go the Hack, named after their 1989 album. True to the band’s long standing ethos, it was completely done at Knight’s farm in rural Victoria.

“You can record an album anywhere these days,” Knight says. “This album was done in my gym shed. The vocal booth was my squat rack with a blanket thrown over it, because it was raining and the rain on the tin roof was a bit loud. We just put a doona and some carpet over the squat rack and it became an instant vocal booth.”

“When you haven’t got much, you’ve got to work with what you’ve got,” he continues. “And that’s ability, ideas… as long as we can have a beer while we’re doing it, we don’t care what we’re doing.”

Like all their releases, Mountain of Piss is a roaring slab of larrikin punk rock fun. But scratch surface and underneath the noisy guitars, frantic drumming and Knight’s half-sung/half-shouted vocal delivery is, as always, plenty of astute social commentary. First single Sin Bin is a damning satire of the self-serving sense of entitlement engendered in the world of professional sport – specifically the football codes and the stream of headlines detailing bad and dangerous behaviour from some of their stars.

“It’s very disappointing,” says Knight. “There’s different clubs and different cultures and some clubs do it really well, and some codes do it really well, some codes are very good at sweeping some stuff under the carpet. You can educate, educate, educate, but at the end of the day, once you’re a dickhead, you’re a dickhead. It’s disappointing because – fucking hell – kids are growing up crook enough as it is because their parents can’t whip them on the arse or they’ll go to jail. So they’re looking to sporting heroes… It would be just nice if you could behave yourself and just respect everyone around. I guess things are getting better… It was just a couple of years ago where it was just all over the newspapers, just poor behaviour, and it was across a lot of different codes.”

Reprehensible behaviour from sports stars isn’t limited to football codes or even recent years, of course, but ironically much of it is the sort of stuff that was once more associated with rock and roll. Ross Knight has been around long enough to offer some perspective on some of the changes that have occurred in the music industry over the years.

“The way the music industry’s gone now,” he says, “if you do or say anything the wrong way you’re crucified immediately. So it seems to be more well-policed. If you look at the music industry 20, 30, 40 years ago, and how it’s operating now, it’s so much more inclusive and respectful. That might seem like a lot coming out of my mouth. There’s a lot of people who’d like to see my head on a platter, but that’s because I say what it is. That’s the way I write a lot of my songs. Instead of saying don’t do this or don’t do that, I’ll write directly about it so people stick their head up and go, ‘Well, that’s disgusting’.”

It’s lessons like that Knight and the Psychos endeavour to pass on to the new guard of bands whenever they can. Showing respect to those around you, most importantly those who are working with you.

“We always try and take a young band away with us and one of the best things you can instil in them is that people don’t throw TVs out of windows anymore. And don’t yell at the person doing side-of-stage sound, and don’t yell at the light crew… you’re a guest and you’re playing in front of people, but respect the people you work with, respect why you’re there and if you do the right thing, you’re always asked back. We’re not the most popular band in the world, never will be, but we always get invited back.”

The Cosmic Psychos have played all over the world in almost every type of venue one could imagine. Wherever they might be, they take everything in their easy-going stride. Sometimes they’ve had to put their DIY ingenuity into action, but they’re not a band to take things out on other people.

“We’ve played in dunnies in Spain, to festivals in front of 50000 people. It doesn’t matter. You walk into a venue and you go, ‘Riiight. People have to walk past my PA to go to the toilet, that’s ok, there’s no foldback, there’s two lights right at the front that don’t work very well’, and we go, ‘Well, let’s make it work’. We made a mic stand out of a gas bottle, a broom and a milk crate one time. You just do what you do and don’t have a go at the poor bugger who’s working for 20 bucks an hour.”

The Psychos prefaced the upcoming shows with a live stream on July 1, something that Knight admits he “doesn’t really know that much about.” The real purpose of the event, he says, was to help out some of their mates in venues around the world that can’t host bands at the moment.

“The main idea was to help out a few places overseas and they could play the live stream in their venue and have people come in and watch it and sell a few beers, and whatever,” he suggests. “The world could certainly survive without us, but if we can help a couple of mates out in some way, then we’ll come up with a way to do that.”

Except for not being able to tour with the band, the lockdown situations around Melbourne haven’t had much impact on Knight’s life. Being in rural Victoria has meant that everything has been pretty standard most of the time. At his age, he reckons, it’s hardly going to affect what he does on a daily basis.

“Apart from wearing a mask to the local supermarket and stuff, it’s been pretty ok. I don’t go to Melbourne unless the band’s playing. All my work is rural with the bulldozers and the farm. My son’s a bit compromised healthwise, so I had to be a bit careful with him,” he says. “But, Jesus Christ, I’m 59. Is my whole life gonna change all that much? No, I’m going to come home, sit in my shed and drink beer until 8.30, go and have some tea, go to bed, get up at 5 and go to work! That’s what I do. It’s not really going to affect me there.”

He is looking forward to getting back out on the road with the Cosmic Psychos, however, because it means he’ll get to hang out with his mates again, drinking and having a blast.

“Last year was the longest break I had without having a gig, probably since I was in high school. I miss hanging out with Dean and Macca, and Digger, and just our little group. Everywhere we play we have a little catch up with someone we’ve known for bloody ages, and then the funnest part is we do the gigs, have a bit of a chat and then we can’t wait to get back to the hotel and drink til the sun comes up and have a bit of a laugh! That’s what it’s all about. Have a drink at the airport in the morning and go and do it all again.”

After almost 40 years of slogging it out, Ross Knight admits that sometimes it just feels like too much. That is until he and the band get together for the first drinks of the tour and he just gets back in the saddle again. It’s sure to be the same way if things go to plan and the Cosmic Psychos come to your town in August.

“It’s funny because Dean and I will travel down to the airport together, and we’ll bitch and moan and say, ‘Fuck, why now? I’m so busy, I can’t be fucked this weekend’, or, ‘I’m sick of this’, and then we get in there to the airport lounge and Dean’s like Champagne Charlie, likes to have a glass of bubbly first thing and I have a couple of beers and then we put our feet up and we’re like, ‘Aahh, here we go again!’ And we’re as happy as pigs in shit!” 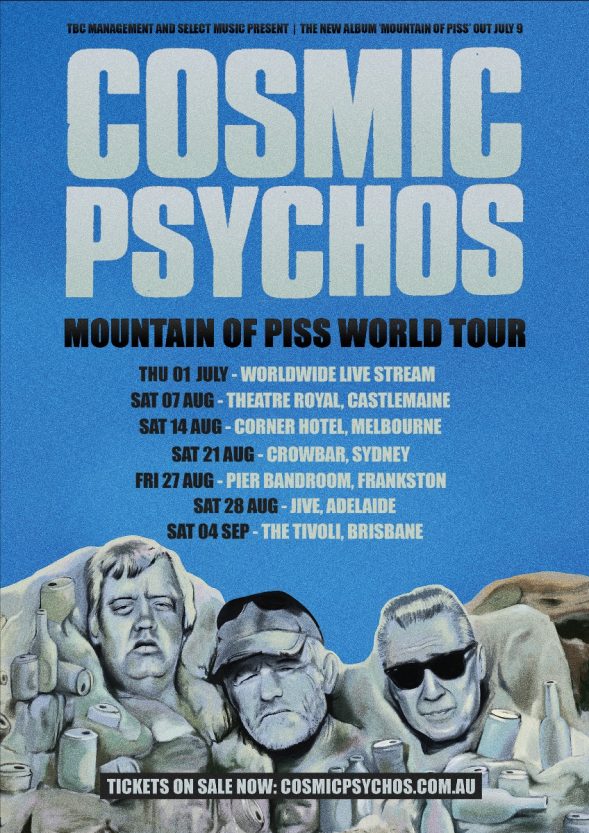