Cradle of Filth: Reviving the Beast

It’s 2am in England and Dani Filth sounds tired. He warns me with a slow chuckle that he might not be as nice as the last time we spoke, and while he certainly isn’t as chipper as usual, the Cradle of Filth visionary is never rude or curt as he talks about the reason for his late schedule – the band’s impending return to Australia to perform their 1998 breakthrough album live.

“We’re paying the entirety of Cruelty and the Beast as the first act, and then we play a set of fan favourites and unusual tracks that we haven’t played for a while,” he explains. “We’ve done this in Russia, we’ve done this in Europe and there’ll be a special show in London that’s not announced just yet, and we’ve done it at select summer festivals throughout the season. It’s been real fun to play what is such an iconic album.”

Cradle of Filth’s third full length release, Cruelty and the Beast was also the band’s first complete concept album and quickly became both a fan favourite and the one that lifted their fanbase beyond the cult niche in which they had previously rested. It also came under fire for the poor sound quality. While heavy in atmosphere, the mix and production robbed it of most of the bottom end. The drums and backing vocals suffered the most. Singer Sara Jezebel Diva publicly slammed the album and drummer Nick Barker and guitarist Stuart Anstis both left the band soon after it was released. Filth himself was to later concede that the album was poorly produced, “but because of that,” he says wearily, “it was perfect to remix and give it a second lease of life.”

“The premise behind doing this [tour] was that last year was the 20th anniversary and we actually had remixed and remastered the entire album, plus ‘Hallowed Be Thy Name’, from the original tapes. We’d done that, all the artwork, a bunch of press from Sony which hasn’t been released yet, a video… all to tie in with this tour. We spent a lot of time on it, as much as we would have done with an original album because not only did the tapes have to be transferred to digital, we literally picked everything apart and built it again, giving it the best sound but retaining the atmosphere.”

The singer worked on the remaster throughout 2018 with producer Scott Atkins. Test pressings were returned late last year, but a legal dispute has left the project in limbo ever since.

“There was one particular person from our past who just would not let it be released,” he says carefully, “so we’re still in the legalities with that person. They’re really just spiteing themselves, really, for no reason. It’s ridiculous. But it’s a legal thing so I really can’t carry on talking about it!”

Legal wrangles have obviously not prevented the band from performing it or turned people away from watching the spectacle unfold on stage.

“It hasn’t stopped people coming out to witness us play Cruelty and the Beast live,” Dani says. “It hasn’t stopped us really enjoying the experience, because it did seem like a big mountain to climb, to play an album in full was difficult to perform in 1998, and play in full twenty years later. It’s gone so well everywhere we’ve played it, and I hope that Australia can warm to the spirit of the album too.”

Cruelty’s theme was based on the legend of 16th Century mass murderer Countess Elizabeth Bathory, whose deeds of unmitigated evil have provided endless inspiration to the metal community. The concept began as a single song, ‘Cruelty Brought Thee Orchids’, but soon became an entire suite as Filth grew more enamoured with the idea.

“I thought if you can extend it into three songs, you might as well extend it into a whole album,” he recalls. “It just took off from there. It was something that grew naturally from first thinking of an idea to the finished, grand over-arcing theme.”

Several tracks have featured in Cradle’s set over the years, but Dani highlights a couple that he believes really stand out.

“‘Desire in Violent Overture’ and ‘Bathory Aria’. ‘Bathory Aria’’s always been one. It’s one of my favourite tracks anyway. It’s along track and it’s in three parts and we play it well live and it comes across well. And ‘Desire’ is just an all-out balls-to-the-wall heavy metal song. Really fast and fun to play.”

Performing classic albums in full has become de rigueur with many artists across the musical world over the last few years, some less successfully than others. Cruelty and the Beast will keep Cradle of Filth on stage for just over an hour, before they return with a second act. Dani Filth wants to ensure that his crowd gets to see them perform other favourites they may have lest they come away with some disappointment.

“The thing is, I went to see Maiden on their tour for A Matter of Life and Death, and I was like … well I was so happy that they played some other songs at the end, because you know, well, A Matter of Life and Death has got some good songs…” He lets his thoughts trail away meaningfully. “We like picking things to play that the fans have never heard before, and we do like a list of ones that we’re going to tackle on the next outing. It’s quite exciting, having the ability to do that. We try and shy away from the usual, where people go, ‘Oh, OK, we’ve already seen that.’”

Until the legal avenues are cleared for the remaster, seeing Cruelty live on stage might be the closest anyone gets to hearing a new version of the album. While that may be some time off depending on the complexities of the case, a new Cradle of Filth album is just over a year away. The band has songs and ideas on the boil. All they need now is time to put them together.

“We’re now collating our ideas and we’ve got some songs written, but we need to extricate ourselves from the live arena and get back to concentrating, as a band, as a unit, on the tracks that we’ve got written. We’ve got a lot of pressure on us because we’ve got new management, we’ve got a lot of good people working for us that we’ve built up, new booking agent…. New things put into place for the next record. All that’s left is to deliver it. So we’ll retreat from the public eye for a while. I’ll hibernate, go into my house and get totally immersed in the record and soon as I’ve got the bit between my teeth, it’s hard to shake it off.” 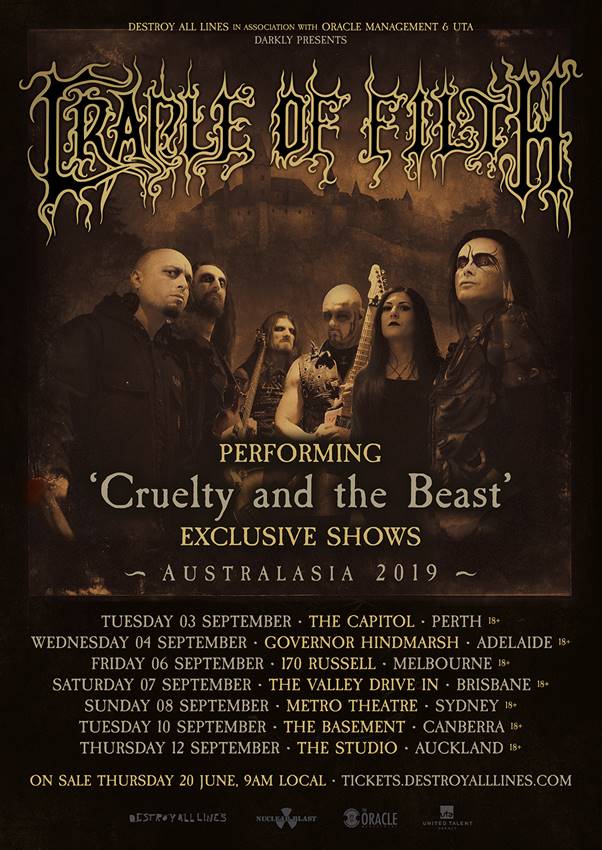