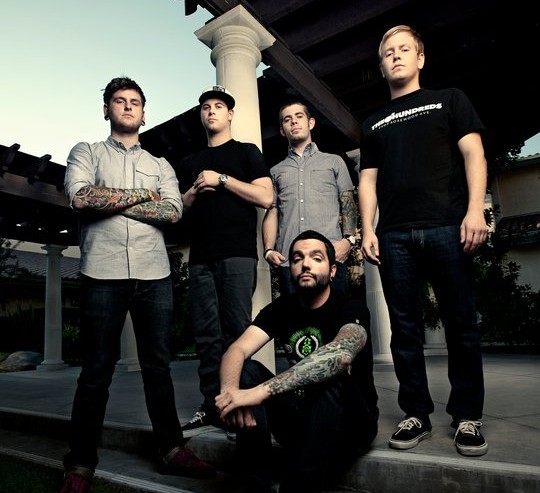 A Day to Remember: Separation Anxiety

Latest release: What Separates Me from You (Victory/Riot!)
Band site: www.facebook.com/adtr
“I think we’re about to uppercut the earth”.

While the aforementioned comment is delivered in a manner far less brazen than you may think, A Day to Remember frontman Jeremy McKinnon certainly doesn’t lack confidence when discussing the new material the band has been working on for some time now. “We’re going to do this Asian/Australian tour, do the second leg of the Rise Against tour, and then we’ll shut down and go into the studio,” he explains.

“We write all the time. Every record is like a constant work in progress and we’re always stoked on what we have at the end because we’ve had so long to work on it. It’s looking like it’ll have a little bit of everything. It’s looking like this will be the biggest tracklisting we’ve ever had, it’s definitely the most tracks we’ve ever had on an A Day to Remember record.”

The previous time this writer spoke to the vocalist for another publication, he seemed disinterested and regularly spouted clichés like “it is what it is” and “we just do what we do” and little else in response to many questions. This time around though, he’s upbeat and thoughtful in his answers. Aside from excitedly discussing the forthcoming video for “2nd Sucks” (“Probably the best video we’ve ever done, I can’t wait for fans to see it,” he raves) and possibly another for “It’s Complicated”, he also continues to wax lyrical about the US act’s next record. Their fusion of metalcore, pop/punk and rock has made them international superstars. Latest disc What Separates Me from You reached #24 on the ARIA Album Charts and at the time of writing has shifted close to 20,000 copies in Australia.

“There’s just so much good stuff, man,” he enthuses about their new songs. “We’ve got enough good material for three albums. I have no idea how we’re going to get it down to an album,” he adds with a laugh. “I feel like we’re just on right now. It’s the biggest our band has ever been, we have the most eyes we’ve ever had on us right now. Everyone’s always trying to take it away from you too, trying to bring you down. (Detractors saying things like) ‘Oh, the last album was good, but it was too mainstream’ and things like that.

“But that’s good, we like staying as the underdogs. We have so many different genres of music we slap together on one album. You have to keep everybody happy and what’s cool is we have enough cool song ideas to keep everybody happy, plus a few ideas you’ve never heard before from us. We go balls to the wall every record. We’ve created this band where we can create whatever we want, whenever we want. We can do an acoustic song, or the heaviest song we’ve done, and it all makes sense – there’s no limitations. There are other bands that have to worry about writing the same album over and over, and we don’t have that pressure. I think a lot of bands have that to worry about, and we don’t.”

Australian fans shouldn’t expect the road-testing of any material at the Soundwave Festival though, as McKinnon emphasizes that nothing was 100 per cent completed yet. The shows will be their third trek to Australia in support of their latest record.

“Australia is our favourite place to be other than home, so it’s always awesome to go there to the place we love,” he gushes.

Their regular visits are obviously indicative of the still-growing demand for the band in this country, something which McKinnon is rather pleased about, even if he can’t quite explain how or why it’s happened.

“I don’t know, ever since we came over there the first time after (2009’s) Homesick, we seemed to have this really amazing following. It’s this really amazing following; it seems like it was the right place at the right time. We’ve just been really lucky. We’ve had a really good response from Australian fans and it makes it easy for us. It was the first place we were able to bring our full production overseas. We’re fortunate.”

A key aspect of the band’s live shows are the passionate, deafening sing-a-longs, which are among the (ahem) loudest that Loud has ever encountered.

“It’s awesome, man,” McKinnon says. “I will never forget the first time we were down there. We were doing well in other parts of the world, but Australia really got it. We went there (again) for Homesick, and it was like a year after we’d been there and the album coming out and we were headlining the metal stage at Soundwave. We thought people were going to throw shit at us; Meshuggah’s on before us. The first show though, it was 30,000 people jumping up and down, singing every word. It was the craziest show I’ve ever seen.

“It went over like that almost everywhere eventually, but it took years elsewhere. Australia got it right off the bat.”