Def FX: The Magick’s Back

Two years ago, the comeback tour by 90s electronic surf-rock heroes Def FX was suddenly pulled by the promoter for reasons that still remain undisclosed. At the exact time the tour was meant to be taking place, the US Virgin Islands were struck by two of the biggest hurricanes ever recorded. The island of St Croix, where vocalist Fiona Horne now calls home, was flattened. Instead of blasting out rock from Australian stages, the experienced pilot with search and rescue training was assisting with the recovery.

“That same year that hurricane hit us, I had been involved in some very dedicated aid and relief flights to Haiti,” she explains. “That island had suffered greatly with Hurricane Matthew in 2016 and there was an island just off the south coast that had been decimated. I was working with Good Samaritan Foundation in Haiti coordinating the missions and flying them myself, and then I became the recipient of aid on my own island. I wasn’t meant to be on stage in Australia. Whether the promoter knew that or not when he pulled out of the tour… I truly believe that God, the Universe – whatever – wanted me here to use my skills to heal. Because it was a really fucking serious time.”

The emotion in her voice as she talks about the disaster is unmistakable. She suffered. People around her were killed. The physical and psychological damage is impossible to imagine for anyone who hasn’t been through it.

“As much as I suffered going through those two hurricanes… the PTSD you get from those events is really intense… the death, the destruction… people I knew and cared for died.” Two years later, she still struggles to put it all into words. “My island home, the whole community, so many of us… we all suffered, the animals, the plants. I really struggled to understand the brutal devastation. How could this be required in the natural scheme of things?”

The experience left the singer scarred and questioning her beliefs. But she admits that she could not have lived with herself had she been on tour with her band, instead of on St Croix, staring down disaster.

“If I’d been in Australia, I would have felt a terrible sense of guilt and frustration,” she says. “As difficult and horrific as it was to go through it, I’m grateful for all the lessons it provided me. And it’s made me even more grateful for the little things, like being able to turn on the tap and have water, or just being able to walk out of the house without having to cut your way out with a frigging chainsaw!”

Two years on, Horne has witnessed the recovery and been left with a new perspective: “I can see, coming out of it, there’s so much rebirth on every level, whether it’s animal, vegetable, mineral. The whole thing: life, society, culture, has been reborn. It brought out the best in us, not the worst in us, but at the time it was hard to understand the destruction that could happen. Twice, in a week!”

The lessons of renewal and resilience in the face of catastrophe have served Fiona Horne well. Since then the effervescent dynamo has completed a follow-up to her last book, 2017’s autobiography The Naked Witch, compiled by new set of oracle cards and is preparing to return to Australia for some spoken word shows and a four date Def FX reunion tour.

“It’s not the really difficult things that define us,” she asserts, “it’s what we do in the face of them. That’s what I learned through all of this. There was a reason it got this bad. And rather than feeling defeated by it, it was, ‘What can I do to make things better? Or to be useful?'”

Horne has used the knowledge gleaned from the St Croix hurricanes as a mirror she’s turned on an earlier source of personal devastation. As The Naked Witch painfully revealed, one day in 1997 the world she knew came  to an end when Def FX spontaneously disbanded. She wasn’t even warned.

“Everyone knows we broke up in 97 in a way that was traumatic, horrible, awful, unprofessional and depressing,” she recalls, with a note in her voice that says it still hurts to this day. “It threw it all in the face of everyone who loved the band and worked hard to make the band happen – not just the band members, but everyone! Record companies, the teams of people… the people that showed up to pay for our fucking shows, and boom! Just like that, it’s over. The opportunity to come back, not just once, and address it and have fun and rock out and slip off the fucking shit that went on in the past and just make something great out of it… the privilege of that can’t be under-emphasised.”

Horne talks of privilege a lot. She knows how lucky she is to have been through the soaring highs and crushing lows of a life like hers – model, rock star, TV celebrity, author, pilot – and to have made it through, and then be offered the opportunity to live aspects of it over again with a self-curated tour with acts like Nunchukka Superfly, Matt Doll and Bitchcraft, with whom she shares a common history as strong as a family.

“The criteria for getting together with these bands was that we share family history. The thing that’s most important is the Def family,” she says. “I’m really grateful that I’m able to do the Def FX part of it all again. It’s just a special opportunity. That point is never lost with me. Who would have thought that we’d get to keep rocking out with everyone? 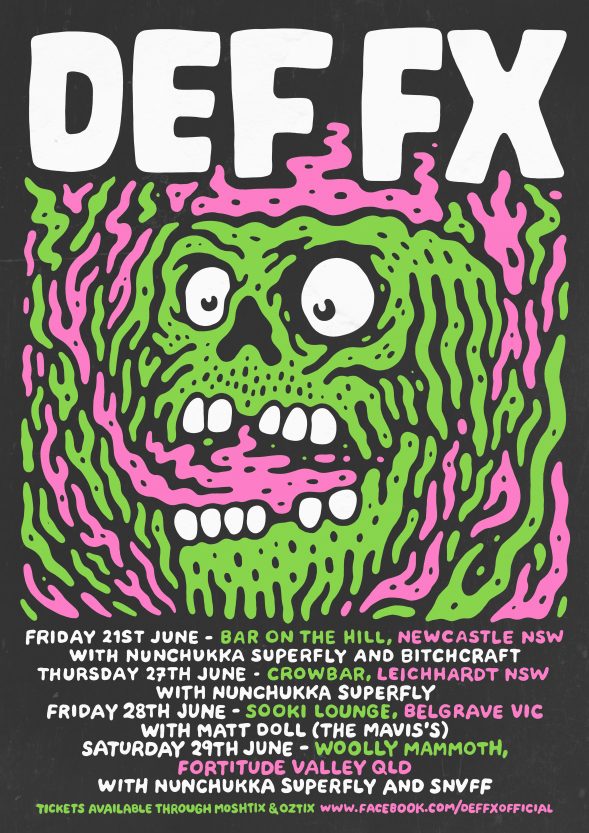