Bands can achieve a lot in nine years. Metallica, AC/DC, Led Zeppelin and the Beatles went from being a bunch of guys with dreams to four of the biggest bands of all time. Formed in 2008, Melbourne thrash metal maniacs Desecrator, on the other hand, have finally just released their first studio album. As frontman and band founder Riley Strong is quick to point out, however, it’s not because they’ve just been resting on their laurels. Desecrator were taking a road that is perhaps more familiar to those on the hardcore circuit.

“We’ve had a slightly unconventional-to-the-recent-norm road from the start,” he admits. “It wasn’t something that we set out to do, to not have an album for such a long time. But when we started out back in 2008, our goals as a band were as a live band, to play shows. That was really our focus.”

Taking that route proved fruitful for Desecrator as they notched up innumerable shows and opening slots, appearing with Mortal Sin, Hobbs Angel of Death, Toxic Holocaust, Warbringer and others. Their first full-length was the 2011 live platter Live til Death. Making a live statement instead of a studio release was in line with the band’s philosophy, Strong explains.

“When the decision came up to release a live album, it wasn’t through lack of budget,” he says. “It was almost a premeditated stance. There was a lot of music coming out that were we seeing that was so overproduced, everyone was trying to compete with the international market and pushing technology as far as they could. Whereas, as a band, we were doing the exact opposite. We loved the organic stuff, we loved the true spirit of thrash metal, which is a live experience. It’s supposed to be a movement-based interaction style of music. So when we did the live record it was something that we did to back up all those theories.”

Live til Death led to an even more hectic schedule of gigging including overseas touring in South East Asia and another string of supports. Desecrator found themselves without the time they needed to make the record they wanted to make. Eventually, they had to stop working to make it a reality.

“Time just flew by. There was always something to do. We were getting looked at by the international market, people were becoming really receptive to it, we were getting great shows in Australia… so it really just came down to that there wasn’t a gap to bring out the album we wanted to bring out until we burnt ourselves out a little bit and there was a break. Then we were like, we’ve got a gap, we have to get it done, people aren’t going to take us seriously if we don’t have an album up our sleeve, so we finally did it.”

The result is To the Gallows, a rip-your-face-off sonic assault of straight-up thrash metal that radiates an almost live, organic feel as it tears through the skull. It wasn’t a one-take live recording, however it may seem, but Desecrator didn’t need to spend a lot of time in the studio doing it. Eight years blasting it out live meant their style and sound was down.

“We didn’t spend a lot of time doing it because studio trickery isn’t something that interests us,” Strong asserts. “But at the same time, we spent enough time to make sure it was right. It wasn’t glossed over, but it wasn’t recorded live. We built it up in a way that a lot of the traditional bands do, where you start with the drum tracks and you layer it up and you add the acoustic guitars tracks and then the vocal layers, so we took a very traditional recording path.”

The real challenge for Desecrator wasn’t the recording process itself. According to Strong, the hardest part was getting ready to go into the confined space of a studio. For a band used to strutting its stuff on stage, they felt they had to prepare themselves for a very different climate.

“It’s such a sterile vibe that it’s not something we’re used to,” the guitarist says. “It’s a controlled environment that, to capture the sound of the music we wanted to make, a lot of bands take a couple of albums to do but we felt we had to get it right the first time because we don’t have any time to muck around. So we spent a lot of time preparing ourselves mentally for the process before we actually walked into the studio.”

With what appears to be a new resurgence in thrash internationally at the moment, where campaigners both old and new are coming out with albums that are in many cases close to career-best, To the Gallows is a timely release. It has also dropped at a time where a new breed of local thrash bands are emerging from the underground all over the country. After the misfire and disappointment of the re-thrash movement of several years ago, it looks like real thrash is making something of a comeback.

“There’s this great new rung of bands that are coming through,” Riley Strong says. “From Victoria you’ve got bands like Mason and Harlott doing great things, then you go up to Brisbane and you’ve got this great undercurrent of a scene coming up with bands like Deraign and Wartooth and Sydney’s got a really staunch old guard. Hellbringer’s cemented themselves so well. There’s great stuff happening all over Australia in the name of thrash metal, so it’s a good time to be doing it. There’s a lot of scope for the younger bands who maybe wanted to play the style but haven’t felt that they could get it up and going amongst a community, maybe felt that they would be standing out as the odd-one-out band, but now’s the time to get involved. Because who knows how long these things last?” 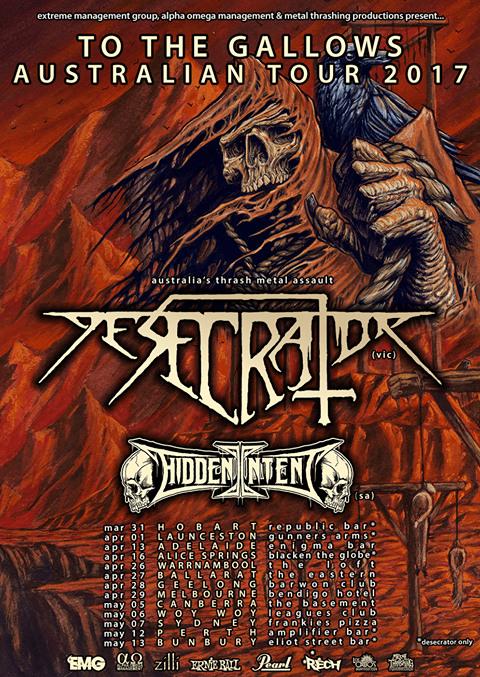