DragonForce: To Infinity and Beyond

Home > Features > DragonForce: To Infinity and Beyond

DragonForce’s exhaustively fast, hook-ridden songs have made them stadium favourites since their breakout third album Inhuman Rampage. Their fame propelled by their inclusion in the ridiculously popular Guitar Hero video game series as much as by their light-speed, epic songs and wildly energetic live performances, even many who wouldn’t normally give any kind of metal a second (or even first) listen count themselves as fans.

The band’s seventh album, Reaching Into Infinity, foreshadows a change in direction for the British sextet as they take a few steps back from the blinding speed that has defined them so far while retaining their renowned epicness – this is their longest album to date.

“I’m happy with the album because we’ve shown that we’ve improved ourselves and we’ve added other elements while we’ve carried on making catchy, epic metal songs in that true DragonForce style,” declares guitarist and founding member Herman Li.

As well as being the introduction of drummer Gee Anzalone to the recording process, Reaching Into Infinity is a tour de force for the band’s bassist Frédéric Leclercq who co-wrote most of the songs including “The Edge of the World”, arguably the most dynamic song in the DragonForce catalogue. At eleven minutes, it’s long even by this band’s standards with a slow, extended intro, death metal parts and even Leclercq adding a guitar solo.

“The challenge of a slower song is different, not physically, but challenging in a different kind of way, in the dynamics,” Li says. “And I quite like that song, because it doesn’t feel like an eleven minute song.”

Leclercq, he explains, “wanted a darker, kind of a slower song.”

“Sometimes when you play fast, you just can’t create that kind of mood, so it started off as a slow song –  a slower song.”

The shift toward more dynamic material seems to be as much to do with the increased influence Leclercq has on the songwriting as much as it does with the band’s desire to evolve as musicians.

“It’s been a bit of both actually,” Li admits. “We felt that it was natural to think about doing that, that we should add a few elements and slower the tempo. That’s the only way I can answer that.”

He goes on to point out that previous album Maximum Overdrive contained some of the fastest songs they’ve done, including “The Game”, the speediest of them all. Yet people complained that it didn’t contain enough super fast songs.

In their earlier days DragonForce were known as much for their wild levels of alcohol intake as they were for their music. These days, however, Li confesses that he has to concentrate more on staying in shape to get through the rigours of their high-energy live shows and demanding touring schedule.

“You have to stay healthy and be in shape to play a DragonForce gig, I realise that now. We started to tour in China, Phillippines, Indonesia, and I can feel it in my body. That much flying around, doing a show, jumping and running around and I can feel that my joints are hurting a little bit, just from not being warmed up properly yet. So I am getting prepared for he next part of the tour. We definitely had our fair share of parties in DragonForce! So we weren’t boring. We did have fun, and we did everything we wanted to do. And now we’re definitely more about playing and making the show as intense as it can possibly get.”

After several tours as part of festival packages, DragonForce will be in Australia next week for their first headlining run in eight years. Li promises we will get the full DragonForce experience.

“All of our songs are really long so when we are at a festival we don’t get to play very many. We are going to do our own show this time,” he says, “and play songs that you wouldn’t get to hear at a festival because there’s not enough time.” 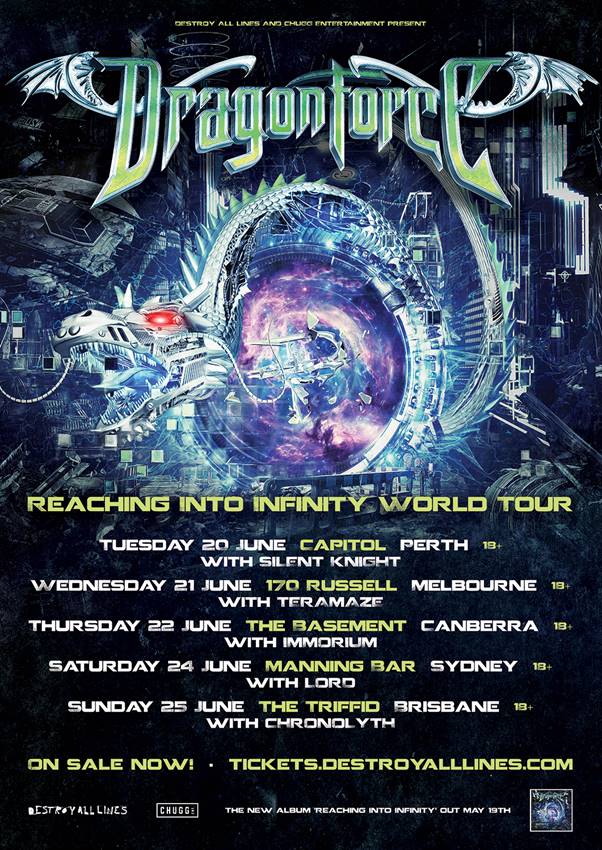