At the Drive-in: Back in Command

Home > Features > At the Drive-in: Back in Command

At the height of their popularity in March 2001, El Paso post-hardcore unit At the Drive-in announced their breakup a mere six months after the groundbreaking and influential Relationship of Command had turned them into one of the hottest rising acts on the planet. For the next decade, vocalist and guitarist Cedric Bixler-Zavala and guitarist Omar Rodríguez focused on another influential act, The Mars Volta before finally agitating a reunion of At the Drive-in. With the reformation completed by a new album earlier this year, ATDI will be in Australia at the end of this month. We caught up with Bixler-Zavala on the phone from his hotel on a rainy afternoon in Osaka.

What was it like to get the band back together after such a long period? What was the process?
A very long, patient, enduring process. It didn’t just happen overnight. People often think that you click your fingers and it happens. I think one of the other aspects of why people liked our band was the human aspect, the human aspect of being a huge gamble that could fail because at any time someone could bail or not want to risk it. It was a process that took five years. The first baby steps were in 2012 and some people who are into the band were really appreciative of the fact that it happened, and some people just didn’t understand why such little things happened. But that was just the human aspect of getting it off the ground. It needed to still work. You can get in a room and it will still work. You can have conversations to try and iron out any problems, but you really have to get back into the thick of it: travelling, playing, being around each other to see if it would work.

So in 2012 we only had a small amount of things we wanted to do so we got suddenly criticised and people thought we were doing it for the money. But people don’t understand the human aspect. We really had to see if it would work. We had six or seven shows, total, in the whole entire world. And then we really just went day to day. It’s a lot to process and put together. It worked, it didn’t work, year after year it was coming, it wasn’t happening, waiting for certain people who were dragging their heels… It’s a long process because of the human element.

How are people reacting to the band on the road again now?
I think people are starting to realise after a while the human aspect of it. You really want to be firing on all five cylinders so when we come out, I’m really happy. You couldn’t ask for anything more. I can’t begin to express how appreciative I am at the end of a set, with people being so obsessed with this for however many years. I definitely have a lot of reasons to get out of bed in the morning, but this is just one of those nice options to have in your life. The fans have just been so loyal, I don’t even understand it sometimes.

You must feel blessed that you have been able to have been a part of not just one band that has been revered and seen as hugely influential, but two.
I couldn’t’ve asked for a better partner in crime, which is Omar. He’s my champion, really. He’s really put his life and body and soul out on the train tracks for me so many fucking times. And he’s really been this force of nature that’s been able to make things happen and really been able to plough through a lot people saying no to us, and he’s been a really great example to me. And now I have some even more insurmountable forces such as Tony [Hajjar] and Paul [Hinojos] in the band who are more than just superglue, they sort of realise the personalities of our cadre, of our gang, of our band, and they make it work. They are people who are passionate about why we do this.

How do you see the band now, on a personal level, compared to the band as it was twenty years ago?
Well the big thing of course is age, and with age comes family. We’ve all had time to have families and sort of step back and go – at least for me – I had to step back and realise that I couldn’t get my kids to get along if I couldn’t at first get my first family to get along. So right now our communication skills are really good. Whereas before, in our early 20s, our only form of communication was letting loose for about 30 minutes on stage. Rock and roll is not a place for functioning members of society. It’s where dysfunction is bred. Now we’re in a position where we can handle things on a bad day. Little things that might become big and break up bands, now they’re just getting handled really well.

Now you’ve had a chance to look back at it, what are your thoughts on in•ter a•li•a?
It just happened so fast for me. I’m just glad we accomplished it, put our minds to it and I’m really proud of all the hard work we did on it. I don’t go back and listen to it, because I’m fucking playing it every night, but I’m definitely very proud that there’s a physical manifestation of us sticking to our guns and doing it.

You are going to be back in Australia once again very soon. What are some of your thoughts on previous visits here?
Well first of all, it’s a symbolic footnote in our history that we kinda had a little more success there. One of our first footnotes was landing in Europe and being a band that not only graduated from just touring in the summer time, to touring in the Fall, then through the Spring and into winter, which is really brutal in the States… landing in Europe and touring there and returning home with money and then going to Japan and then Australia and you’re just surrounded by all these fucking heroes and you’re playing this great festival [2001’s Big Day Out], which is a great festival compared to some of the festivals that exist in the world. It was just one of those moments where we were like, Wait, we have our own hotel room? What the hell is that?

Australia holds a very symbolic place in my heart. I have great memories of playing there. Great things happened. I think one of my favourite moments was having people like PJ Harvey and [The Bad Seeds’] Mick Harvey at the side of the stage watching us while we were there. They were always so supportive of us, and that was a big deal. 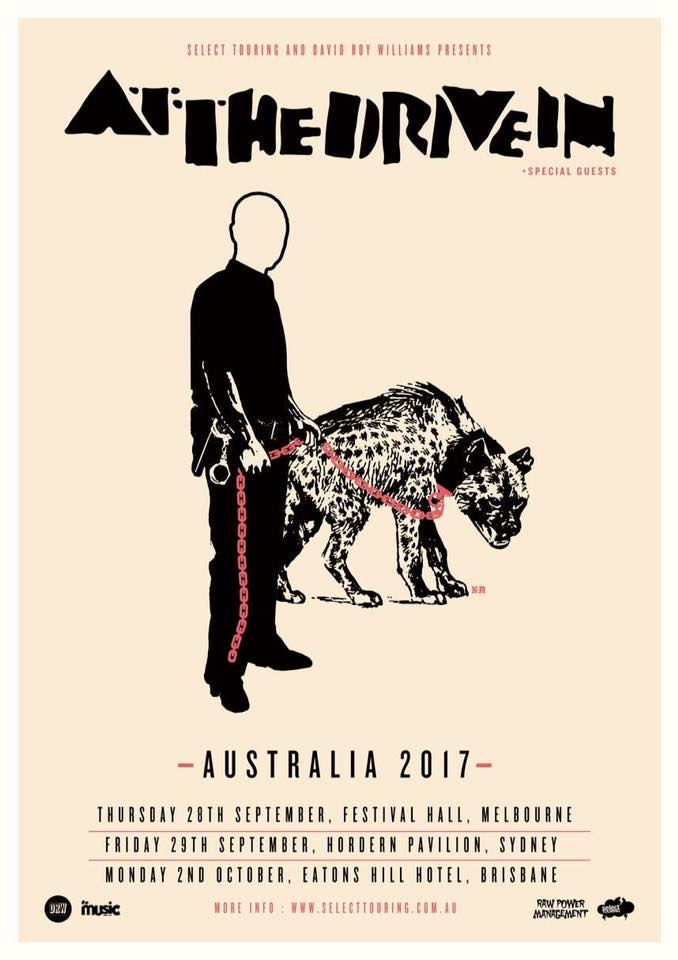